How ‘The Mandalorian’ Creators Reduced Production Footprint Through Technology 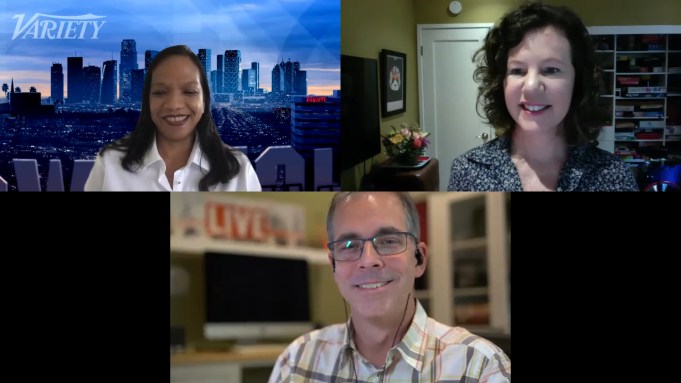 During the final episode of Variety‘s Sustainability in Hollywood event presented by Toyota Mirai, Rob Bredow, senior vice president and chief creative officer at Industrial Light & Magic, and Janet Lewin, senior vice president and general manager at ILM and co-producer of “The Mandalorian,” talked to artisans editor Jazz Tangcay about how the virtual production of “The Mandalorian” has allowed the show to reduce its carbon footprint.

When Bredow and Lewin were first approached to sign on to “The Mandalorian,” producer Jon Favreau had just wrapped two virtual production-based films, including “The Lion King.” And with his upcoming project, Favreau and the team hoped to use virtual reality tools to create an authentic story from the “Star Wars” universe.

Lewin said the key to creating a live-action film through virtual production is “moving post-production to pre-production,” which means creating and editing the backdrops prior to the shooting.

“You can bring these locations — these amazing desert locations, these amazing buildings that you would probably never be able to take a crew of 100 or 200 people to, because they just might not be suitable for that big of a team,” Bredow explained. “But you can bring these amazing locations into our Stage Craft (virtual production platform) set and reproduce them, make changes to them, make them appropriate for “Star Wars” and put them up on the wall, so the director of photography can directly photograph it.”

Lewin added the advance of production technology has changed the creative team’s workflow. Rather than relocating the cast and crew from one location to another, “The Mandalorian” team shot half of the series on one Stagecraft that provided more than 60 backdrops. Some scenes were shot in a small backlot, Lewin said, especially when the team working in a virtual environment wanted a bit of sunlight to brighten up their day.

“Today in our current lockdown situation, people can be in different places, and we can network everyone together so they can be virtually in the same space and doing a virtual scout in a location that either never existed or they’ve never been before,” Bredow said. “We can still extend a crew of one or two people out to go acquire a new place and then bring it to the filmmakers so they can plan out the future series in this way, and we’re at a very good time for this kind of innovation to allow those kind of workflows and to allow the creative process to continue.”

By reducing set construction and relocation costs, the production was also able to cut down on carbon emissions by 30 tons, the equivalent of 39 acres of trees for a year, according to Bredow. With lighting, the team used LED-powered lights that use 70% less energy than the equivalent incandescent light. For physical components of the set, the production designers also used foam and luan, materials less harmful to the environment.

For the second season of the show, Bredow shared that “The Mandalorian” team no longer feels limited to following the pre-production plans with the LED walls. “We knew we could make it work, and we knew how much we could rely on the real-time computer graphics,” he said. “I’ve walked into the set knowing what I expected to see, knowing what the set was supposed to be, and I knew where it was supposed to be practical and where it was going to be digital. And sometimes the set fools me, like I walk in and I’m like, ‘wait a second, is that a real wall or a fake wall?’ And I can’t tell with my eyes, so that’s how detailed the work is. So you’ll see in Season 2 that the sets are a lot more ambitious.”

Despite creating the upcoming season remotely, due to coronavirus-forced shutdowns, Lewin said the show’s virtual production allowed the team to easily collaborate from home. “The way that we can approach our reduced footprint on set is very appealing to everyone who’s wanting to get back into production,” she said. “It’s not a one size fits all. We can tailor the way in which the production wants to use virtual production, so it could be for a couple of days or it can be for 20 weeks. So I think it’s a really exciting time for virtual production in that regard.”

The conversation with “The Mandalorian” creators was followed by a dialogue on sustainable diets between actor Mayim Bialik and Variety‘s features editor Malina Saval.

A longtime advocate of sustainable diets, Bialik shared that going vegan looks different today than when she transitioned to being a vegetarian. With no personal cell phone and computer, she read VegNews to learn new ways to cook her vegetables and maintain a financially sustainable diet.

Bialik addressed the anxiety of introducing a new diet to family and friends, especially to children. She encouraged parents to not only introduce the way of eating but discuss the importance of preserving the environment.

“It’s not like a political campaign,” she said about veganism. “But we also do have an obligation to each other, to the environment and also to the healthcare system, because we end up paying for the problems that the food that we’re told to eat is creating.”