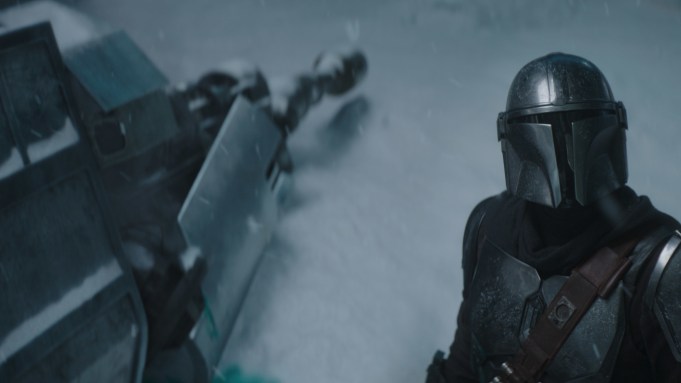 (SPOILER ALERT: Do not read on if you have not watched the second episode of season 2 of Disney Plus’ “The Mandalorian.”)

The second episode of “The Mandalorian” season 2 began with Mando fighting off yet another batch of bounty hunters trying to get their greasy mitts, claws and other alien appendages on Baby Yoda.

Once dealt with, Mando returns to Peli Motto (Amy Sedaris), who introduces him to a female frog-like alien who Motto says can lead him to more Mandalorians. But as ever, there’s a catch. The frog lady needs to get her spawn fertilized by her husband who has settled on the distant moon of Trask. If Mando wants the info, he has to ensure her safe passage to her froggy husband.

But no more croaking around, here are some burning questions from Chapter 10:

What more tricks does Mando have up his armored sleeve?

From a flamethrower to a cluster of tiny missiles on his wrist to a two-pronged rifle, Mando is one of the most heavily-armed characters to travel the “Star Wars” galaxy. And in this episode he used his explosive jetpack in a new, creative way. One of the bounty hunters chasing him manages to grab a hold of Baby Yoda and holds a knife to his precious little neck. He demands Mando’s jetpack in exchange for the Child, and Mando obliges. However, as the rather diminutive fellow runs off with his prize, Mando activates the jetpack from his wrist, sending the hunter shooting into the sky. We learn that Mando can control the jetpack, and presumably the rocket attached to it, like a drone, so expect that to come in handy once again in later episodes.

Your vehicle can get pulled over for not signaling in space?

With frog lady and her spawn safely on board, Mando sets off for Trask, but is soon pulled over by a pair of New Republic pilots (played by “Kim’s Convenience” star Paul Sun-Hyung Lee and “Mandalorian” executive producer Dave Filoni). Everything seems to be in order until they ask Mando to switch on his signal so they can identify his ship. Mando knows the jig is up, so he pulls a sneaky dive maneuver and escapes the two pilots by crash landing into a scary ice cave on a nearby planet. Nothing bad ever happens in “Star Wars” ice caves, does it?

Baby Yoda eats frogs and Mando is transporting a frog lady with her eggs, where is this going?

We’ve seen Baby Yoda gobble down whole, live frogs before, so when a human-sized frog alien with her yummy-looking eggs comes on board, it’s snack time for Baby. Mando spend a good chunk of the episode trying to stop Baby Yoda from inhaling the eggs, with little luck at times. The frog creature doesn’t seem to notice that a few are missing by the time she’s reunited with her eggs, but Baby’s little burp would indicate he’s had his fill of the orange orbs. With the frog’s spawn out of reach, Baby reaches instead for a an egg growing from the ground in the ice cave in which they find themselves trapped. However, this triggers a massive ice spider attack, swarming Mando, Baby and frog lady back to the ship. Luckily, the two pilots find them in the nick of time and blast the spiders off the ship, before declaring that Mando’s good deeds just about outweigh his bad and letting him off with a warning this time.

What happened to Boba Fett?

The episode ends with Mando, Baby Yoda and frog lady continuing their journey to Trask in a now battered ship. But after the season 2 premiere ended with the tantalizing revelation that Boba Fett is still alive, we get no more signs of him or any other exciting old friends for that matter in chapter 10. “Mandalorian” fans have come to expect the series’ slow pace, but the lack of plot development in this episode may be a little frustrating given the eventful premiere.