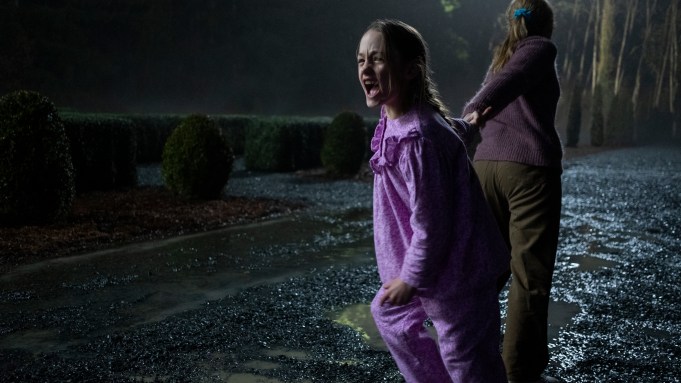 “The Haunting of Bly Manor,” the upcoming season of Mike Flanagan’s Netflix anthology series, released a follow up trailer that attempts to give a bit of plot details on this new horror series.

But one thing that does seem apparent, the ghostly trials faced by the Crain family in “The Haunting of Hill House” are over, as the show zooms in on the Wingraves. Set to the a slowed down version of Mötley Crüe’s “Home Sweet Home,” because cuing up a super slowed down cover of an 80s anthem is a literal requirement of every trailer now, the footage shows the next spooky house of horrors.

While the plot, like the lady in the lake showcased in this new footage, is still a bit murky here’s what we know for sure. The next series is based on the 1898 horror novella, “The Turn of the Screw” by Henry James, “Bly Manor.” But fans of the original should be forewarned, this isn’t a follow-up to the beloved Netflix’s series “The Haunting of Hill House.” While the creative team and cast members return for the nine-episode series, the stories of the two seasons are not connected.

Victoria Pedretti, who portrayed the older version of Nell Crain in “Hill House,” returns in the lead role, an American nanny looking after two orphaned children (Amelie Bea Smith and Benjamin Evan Ainsworth) in 1980s England. She looks after the kids who lost their caretaker (Tahirah Sharif), who tragically died on the grounds of their family manor in the town of Bly.

Other “Hill House” cast members make comebacks in the ensemble, including Henry Thomas, who now portrays Henry Wingrave, uncle to the kids. Oliver Jackson-Cohen returns to play Peter, a resident of Bly Manor who makes other residents’ lives difficult, and Kate Siegel will also appear in a mystery role.

Netflix reordered the “Hill House” anthology in 2019, entering a multi-year deal with executive producer Trevor Macy and Flanagan. Under the Intrepid Pictures banner, the duo recently produced “Doctor Sleep,” the feature adaptation of Stephen King’s 2013 follow-up to his seminal novel “The Shining,” at Warner Bros. Pictures. They have previously collaborated on films including “Gerald’s Game,” “Oculus” and “Hush.”

Executive producers for “Bly Manor” are Flanagan and Macy for Intrepid Pictures, along with Darryl Frank and Justin Falvey for Amblin Television. Kathy Gilroy, E.L. Katz and Diane Ademu-John were produced.