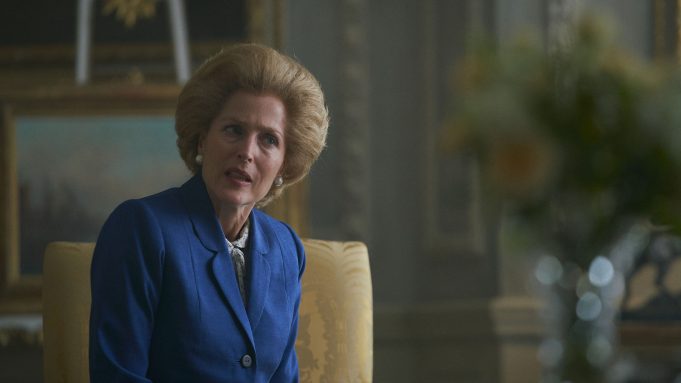 Two women running Britain, “perhaps that is precisely what this country needs,” Queen Elizabeth II (Olivia Colman) says in a new trailer for the fourth season of “The Crown.”

But, as anyone with an understanding of U.K. history knows, it is anything but smooth sailing when Margaret Thatcher (played here by Gillian Anderson) becomes Prime Minister.

“My goal is to change this country from being dependent to self-reliant, and I think in that I am succeeding,” Anderson’s Thatcher says in the trailer, which you can watch above. However, this sentiment is followed by the mention of “joblessness, recession and crises” that are occurring, as well as the enemies “left, right and center” she may be making.

The fourth season of “The Crown,” which launches Nov. 15 on Netflix, begins in the late-1970s and continues through the 1980s, following the tension between the Queen and Thatcher, which only continue to grow as Thatcher leads the country into the Falklands War.

“It could be said that they are two very similar women, born only months apart. They are very much defined by the Second World War, by a sense of a sense of frugality, hard work, commitment, Christianity and so much more. It was a commonly held piece of wisdom that the Queen and Thatcher didn’t get on. I think there was probably a lot of respect. But they also had many differences, it was really fun exploring their differences and their similarities. I also get a chance to explore them both as mothers. Writing Thatcher and the Queen as mothers was probably an angle that no one has explored before. It yielded one of my favorite episodes in the season,” executive producer Peter Morgan said in a statement.

Meanwhile within the season, the royal family is also concerned with the line of succession and therefore need to find an “appropriate” bride for Prince Charles (Josh O’Connor). Although Charles is besotted with Camilla Parker Bowles (Emerald Fennell), his romance with Lady Diana Spencer (Emma Corrin) becomes a “much-needed fairytale” to unite the British people.

“Your duty now is choice of a woman that people will love as princess and in due course as queen,” he is told.

The season will explore the ups and downs of that relationship, including Diana’s propulsion from teenager to public figure, their global news wedding and equally international travels, and Diana’s desperation to feel a true part of the family.

“All I want is to be loved,” she tells Queen Elizabeth. “It’s all any of us want from you.”