‘The Crown’: Emma Corrin on Princess Diana’s Bulimia, Hugging the Queen and Handing Off to Elizabeth Debicki 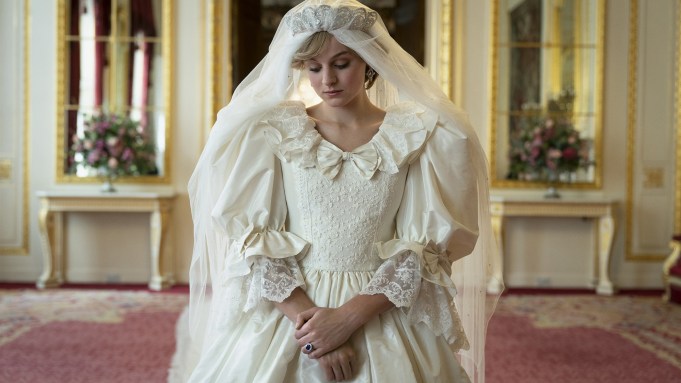 It took only a few hours for “The Crown” to cause a royal rumble when it launched on Netflix over the weekend, and there are no prizes for guessing why.

Season 4 introduces viewers to Princess Diana for the first time and spends a large part of its 10 episodes charting her tumultuous marriage with Prince Charles and analyzing her bombshell impact on the royal family.

Now that everyone has fallen in love with Emma Corrin’s firecracker performance as Lady Di, the relative newcomer broke down several key scenes with Variety and talked about why portraying the princess’ eating disorder was so important to her.

The amount of research for the role must have been intimidating.

I did a lot of preliminary reading and leafing through biographies, trying to get a sense of the things they all said, trying to filter through what was complete bullshit and speculation, and what was some tangible element of truth about her life. I started looking up documentaries and ended up only needing one, which is “In Her Own Words.” It’s the most superb documentary narrated by her in a series of tapes she did with Andrew Morton alongside a book. Not only is it her telling her story, but for me I got a sense of how she spoke about things. No matter what they’re saying, you get a sense of the tonality of her voice, what things come up more than others.

Did you speak to anyone who knew Lady Di?

I remember I spoke to her private secretary Patrick Jephson. I can’t remember what I asked him, but he just told me that she was so happy. Despite everything, despite the sadness that she experienced and felt, she had the kind of personality that was totally inclined towards happiness. I really loved portraying that in the early scenes and with her friends. It was such a treat to show her in that way. It makes what happens even sadder.

But I couldn’t find what I was looking for in the research in terms of finding the person I was meant to play. It was when the scripted landed in front of me, and I was able to see the context in which I was playing Peter Morgan’s Diana, our Diana, that everything changed. It didn’t feel like I was going to be out of my depth or stepping on her toes. How do you play Diana Princess of Wales? You don’t and you can’t, you play the version that’s been written for you.

The show highlights the age gap between Prince Charles and Diana and points to it as a significant factor in their marriage falling apart. Princess Anne even calls it “an age chasm.” What did you make of that?

It’s not only the age chasm, but also that these two people have nothing in common. It’s one thing to be 13 years apart if you are very well suited and you fall in love because you have so many things in common, but these are two people in extraordinary circumstances, and the age chasm was made even bigger because they both needed the same thing from each other. Diana had been somewhat neglected by her parents, from what I’ve read and understood, which meant that she wanted that kind of parental love. And Charles, from what we’ve seen in Season 3, needed the same thing because of the coldness of his relationship with his parents. They both needed someone who would be that figure in their lives, but they couldn’t give that to each other.

Charles is also so cold towards her. It’s the claw on the shoulder. Josh (O’Connor) and I had this running joked about it. He just cups her shoulder or gives her a pat. It’s so cold, and she has this warmth and vivacity, and that’s the gulf between them. In the Balmoral episode when she’s leaving he gives her a pat. I’d be livid if someone did that on a date.

There’s a generational difference too.

Yes, she doesn’t fit in with how the royal family operates. Diana is from a completely different generation, with a completely different life experience. You see it with her friends, she’s so young, she’s such a kid. She’s got Duran Duran posters on the wall and she’s dancing to Blondie, and these are cultural things that the royal family doesn’t engage in. There’s a playfulness that they don’t have. The age is one thing, but it’s so much more than age.

Princess Diana’s struggle with bulimia is a large part of her character in Season 4. Was that in there from the beginning?

I remember getting the scripts and it was alluded to, it was mentioned, but I remember saying to Peter (Morgan) and the script editors, is it OK if I really research this? I really want to do it justice and I think it’s important if we’re going to show it that we really show it. If we’re going to show it we need to do it properly, otherwise I think it’s unfair on people who experience it. It’s an eating disorder. If that’s going on in your life, it’s symptomatic of other things and it’s also not just a sideline. It comes into everything you do because it’s triggered so much. If you’re suffering from an eating disorder like bulimia, it’s something you structure your day around, you’re thinking about it at meals, after meals, and in between. Those were difficult scenes to film and I also feel like taking her to that place was a good thing. It gave me somewhere to go with her, but I was exhausted a lot those days coming off set because at the same time as you’re playing someone who’s fictionalized and obviously you’re not feeling or thinking those things, it’s your job to make yourself feel that way. Especially when you’re stuffing your face with food, binge eating, it’s hard to not let it affect you in some way.

Talk about the crucial scene where Diana hugs the Queen and she just stands there, stiff as a board.

That’s definitely meant to be a huge moment because no one has hugged the Queen before, it’s a gesture that’s totally alien to her. That scene was so funny because Olivia is the loveliest, silliest, most down to earth person. I remember sitting down to do this scene where she was meant to be horrible to me, and I thought how is this going to work? How am I ever going to feel truly scared? She sat down, turned it on and I was terrified. I felt like I’d disappointed her, I felt as small an uncared for as Diana did.

Diana’s arc is extraordinary from the beginning of this season until the very end. How would you characterize it?

You can actually trace her character arc purely through her costume. I get so many questions about her fashion, what was it like to wear those amazing gowns and dresses? And I’m like wait till you see the first few episodes, you will not be this hyped! There were only two episodes where I’m wearing the clothes people know. She starts out in these very mousy, sloaney, really not great outfits. But then we leave her with this insane backless dress, and that’s the trajectory from girl to woman, with a lot of bumps along the way. I love that for the majority of the series her fashion is shit. I think Diana’s fashion always blinds you a bit so you don’t really recognize who was behind there and where she started. Our series takes her back to a pretty clueless little girl.

You’re handing off the baton to Elizabeth Debicki for the final two seasons. What did you think when she was cast?

They look like a spitting image of each other. I was with Vanessa Kirby recently who knows her very well and I’d love to speak to her about it, I don’t know if she wants to hear from me, I should probably wait for her to contact me. It feels strange to hand it over, but exciting, and what a person to hand off to.

Related: ‘The Crown’: How to Eat, Drink and Live Like the Royal Family