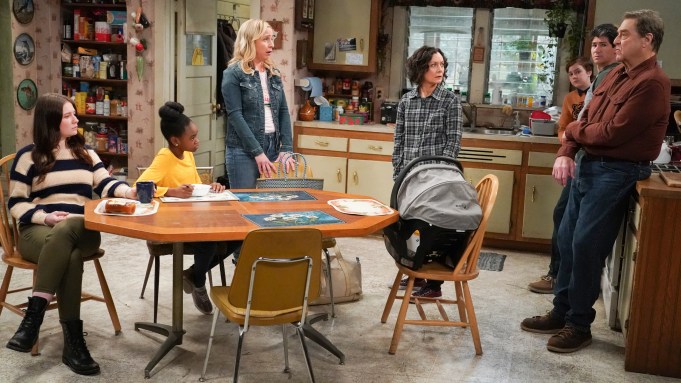 “The Conners” showrunner Bruce Helford knows his titular characters “were built for disaster,” so there was never a question about whether the third season of the ABC family sitcom would tackle the real-life COVID pandemic.

“It just seemed natural that we would be in the middle of this and do it,” he said on a virtual panel for the show on Wednesday. “I know there probably aren’t a lot of shows that will be reflecting what’s going on, but we felt an obligation to our viewers to stay relevant and to show [a family] that knows what it’s like.”

Commenting on real-world issues as they go on outside the show is certainly nothing new to either “The Conners” or its predecessor original series “Roseanne.” Last season alone “The Conners” went live on an election night to have its characters responding in real-time to ABC News footage of how candidates were doing. This year, the show does plan to do an episode about the presidential election, Helford shared — though neither it, nor any other planned episodes will be live this time.

Although the production team didn’t know what their air date would be for a while, when they found out they were returning Oct. 21, they “rushed into production” on an episode that deals with “the polarization in America and what’s going on before the election,” Helford said.

The episode will also discuss Halloween because, he notes, that holiday won’t be the same this year and they wanted to show “how to do it right.”

“The Conners’s” production is back up and running now — and the panel actually took place on the show’s soundstage. “The weirdest part [about going back to work] was when we finally did tape a scene and finally dropping our masks — that felt very naked,” said actor Laurie Metcalf.

Helford said they have “rigid protocols” on the stage that include “zones where you have to wear a certain amount of PPE,” as well as “testing before you come on stage.” Scenes with a lot of extras are “off the table for now,” as they are reconsidering how many people they can have in a scene to keep everyone safe and socially distant. Of everyone’s health in the cast, crew and fans, Helford said, “We take it damn seriously.”

In fact, they take it so seriously they are forgoing the live, in-studio audience. “We talked about it and we feel the risks aren’t worth the benefits,” actor and executive producer Sara Gilbert said of including them. “As an actor I can feel insecure or feel like it affects my performance but the producers swear it doesn’t, so you guys will have to be the judge.”

On-screen, the characters will be dealing with the ongoing issues around the pandemic, from “Mark taking people’s temperatures when they’re coming home,” Helford previews, to characters wearing masks in their workplaces. But, he notes, “we’re reflecting all the different aspects” of how people handle social distancing, including that the family doesn’t wear masks among themselves at home because they are quarantining together.

Thus far, “The Conners” has shot four episodes, Helford revealed, and the plan is to continue the pandemic storyline “through most if not all of the episodes, assuming there will be hot spots,” he explained. “God willing we’ll be doing it long after it’s gotten better in America.”

Watch a trailer for “The Conners” Season 3 above.