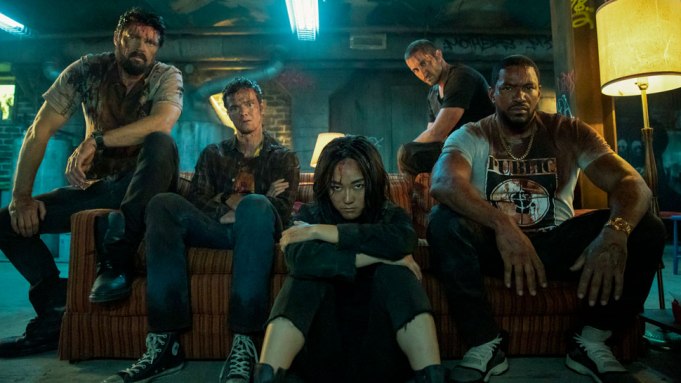 “The Boys” are back and badder than ever.

The vigilante versus superhero series — based on the best-selling comic by Garth Ennis and Darick Robertson and developed by Eric Kripke — is known for its violence, vulgar language and insightful critique of a world where superpowers aren’t always used for good. And when fans got their first look at the series’ second season at the virtual edition of San Diego Comic-Con, it was clear that the show wouldn’t be backing off of the blood and guts either, revealing a particularly gnarly incident of a speedboat skewering a whale named Lucy.

“I mean, it’s like Eric Kripke has a thing against sea mammals,” joked Karl Urban when Variety asked just how much “whale violence” fans should brace themselves for this season. “First, you know, Season 1, it was dolphin atrocities and Season 2, he’s lining up a whale, so it’s good to see that there is a progression in the targets — they seem to be getting bigger.”

“He should go small for Season 3, like a sardine or minnow,” Laz Alonso chimed in.

That’s the type of guts (both literally and figuratively) fans have come to expect from the Amazon Prime Video drama, which follows a group of vigilantes known as The Boys, who are hellbent on taking down the world’s most powerful superheroes, a group called The Seven. Team Boys is made up of Urban’s Billy Butcher, Alonso’s Mother’s Milk, Hughie Campbell (Jack Quaid), Frenchie (Tomer Capon) and The Female/Kimiko (Karen Fukuhara), while The Seven are Homelander (Antony Starr), Queen Maeve (Dominique McElligott), A-Train (Jessie T. Usher), Starlight (Erin Moriarty) and Black Noir (Nathan Mitchell).

After its uber-successful debut last year, “The Boys” added an after-show hosted by Aisha Tyler. (A “rewind” of Season 1 launched last week, while new episodes will roll out with Season 2.) The series has already been renewed for a third season.

“It’s really, really gratifying. I’m just enjoying the s— out of it,” Kripke said. “These things are rare, and you have to appreciate them when they happen. I’ll also say that ‘The Boys’ is probably the most fun I’ve ever had on a job. So, the fact that people love it as much as I do has been something I really appreciate.”

But the show isn’t all fun and games — or bullets and banter — Kripke and his team have purposefully imbued the series with commentary on today’s society.

“Very soon into writing it, we realized that it works as really a perfect metaphor of the exact minute we happen to be living in,” he explained. “Because it’s about where the line is blurred between authoritarianism, fascism and celebrity, and so once we realized that, then we felt both the opportunity and a certain obligation to really talk about those things, because we had the ability to in a way that few shows can.

He continues: “There’s a lot of things that are happening in the world are making me upset. And so, I’m very lucky that I have a job where I can talk about those things and satirize those things.”

After Season 1 tackled issues including sexual assault and workplace sexual harassment in a storyline between Seven newcomer Starlight and veteran member The Deep (Chace Crawford); the series’ second season will also take on racial injustice. Kripke reveals that the season’s fourth episode features “an African American teenager getting pulled over by a supe and it goes horribly wrong.”

“The show really, really hit the nail on the head when it comes to depicting very similar moments and very similar conversations that we are having today as a society and as a community,” Alonso explained. “We’ll see those same type of structures, power structures are being challenged on our show.

“I love that we deal with zeitgeisty issues,” Moriarty added. “I love that I’m on a show where we deal with things that are going on in the real world that are not cool, like sexual abuse and systemic racism. And I love that we can curse on the show. I think it goes to show that it’s a lot of people in a room who are talking about real things that want to get beyond that surface level conversation.”

“When it comes to systematic racism, and just the general inequality in our country, that’s been going on for some time, so I just love the fact that we are on a show that is willing to take kind of a heightened road to get people to understand what we’re talking about,” Quaid agreed. “Doing the show, we don’t really have to pretend that the world isn’t on fire; we can actually talk about real stuff as well as blow up a whale or whatever.”

Season 2 also features newcomer Aya Cash, as well as Giancarlo Esposito in an expanded role from his appearance in the first season. Cash plays The Seven’s newest member, Stormfront, whose devil-may-care attitude immediately rubs Homelander the wrong way, mostly because she’s a natural challenger for supremacy within the group.

“What we really wanted from Stormfront, among other things, is a character, a female who wasn’t scared of Homelander, and then would just proceed to steal the spotlight from him and not worry about what he’s going to do,” Kripke explained. “That’s the worst thing that could happen to Homelander because he’s so insecure and threatened by a woman, especially. So, what it was really important was that we needed an actor who could go toe-to-toe with Homelander and make him blink. And Aya just had such a formidable intelligence and a wit — it just reads in her energy that we knew she’d be strong enough to stand up to him.”

“When I watched Season 1 I was like, ‘Who is that guy?’” Cash said of working opposite Starr. “On a personal level, I was like, ‘Aya, you better be up for this’ because I think Ant is really talented.”

And though they may have clashed on-screen, Cash said Starr and the rest of the cast couldn’t have been more welcoming. “I kept waiting to meet the jerk and I did not meet them. They’re going into Season 2 — I’m coming in on their sophomore album that they’re worried about, so they can just blame me if it goes wrong.”

Esposito plays Vought CEO Stan Edgar. The character made a brief appearance at the end of Season 1, but Esposito teases that the boss has a much bigger role to play this go-round.

“I wanted to play him because I felt he was a different man at the wheel. He was a different man who had control,” Esposito explained. “He’s a company man. But I also love how relaxed and calm he is because he doesn’t want anything. Playing someone who has a bigger agenda. He is now trying to really be the champion handler of The Seven and protecting all that is Vought.”

Explaining how he ended up in the role – the Emmy-nominated actor worked with “The Boys” showrunner on the NBC post-apocalyptic drama “Revolution,” so it was an easy “Yes” for him to sign on. Kripke seems to have applied a similar technique, booking his “Supernatural” star Jensen Ackles for the role of Soldier Boy in Season 3. According to the graphic novel, after fighting in World War II, Soldier Boy became the first super celebrity and a mainstay of American culture for decades.

“This guy’s got a brilliant mind,” Esposito said of Kripke. “I said, ‘I’d do anything for you’ and that’s it. This world of ‘The Boys’ is fascinating, because it resembles and reflects a lot of what we’re going through in our own world, in our country, but also what we are going through some of us as individuals: We go through depression, we go through trying to accept ourselves, we go through self-esteem issues, we go through power issues. I love a world of superheroes that are slightly human having to deal with human issues.”

For more about the world of “The Boys” watch the interview above:

Episodes 1-3 of “The Boys” begin streaming Sept. 4 on Amazon Prime Video; the remainder of Season 2 will debut weekly.