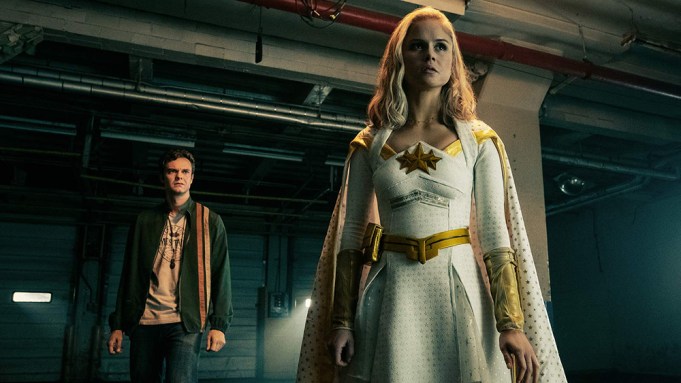 The Boys are back — well, almost, anyway.

“The Boys” showrunner Eric Kripke and stars Karl Urban, Jack Quaid, Antony Starr, Erin Moriarty, Jessie T. Usher, Laz Alonso, Chace Crawford, Karen Fukuhara, Tomer Capon and Aya Cash got together for a virtual panel as part of San Diego Comic-Con@Home on Thursday, during which they revealed that the show’s already been renewed for Season 3 and will get an aftershow hosted by Aisha Tyler, who moderated the panel. They also previewed some details about Season 2, including what new characters like Cash’s Stormfront will be like and where we find Hughie, Butcher, Annie, Homelander and more.

See the biggest takeaways about Season 2, which will hit Amazon Prime Video on Sept. 4, below.

Speaking about how Season 1 covered topical issues like #MeToo and the American weapons industry, Kripke said Season 2 will take aim at white nationalism, white supremacy and systemic racism. That shouldn’t come as too much of a shock to those who are familiar with Stormfront, the new addition to The Seven who is played by Cash and, in the comics, is a male neo-Nazi. Cash didn’t reveal too much about her character on the panel, but praised Kripke for “both allowing her humanity and hopefully punishing her.”

One of the big cliffhangers at the end of Season 1 was the fate of A-Train, who had suffered a heart attack due to his abuse of Compound V, with Hughie and Annie attempting to save him. The speedster does end up surviving, but his addiction to the drug has taken a heavy toll on his body — his most important asset.

“Physically, A-Train is in bad shape,” Usher said. “He’s abused Compound V and it’s taken some very long-term effects on his body and him being an athlete, that’s very much on the forefront of the issues that he has to deal with. But A-Train has so many things that he’s been literally running from for so long, now he’s in the place where he has to just stop, turn and face these things, and it’s tearing him apart.”

Tyler also teased that A-Train, who was focused on Hughie in Season 1, will find a new target. Usher agreed, saying A-Train’s method of dealing with issues is “deflecting” to others.

The Boys Are ‘Totally Screwed’

After Season 1, The Boys are fugitives, on the run and “basically totally screwed,” as Kripke put it. But they’re also dealing with some issues internally; Butcher found out that his wife, Becca, is alive and raising a superpowered son, who Homelander, who raped Becca years earlier, is the father of. Butcher’s focus becomes solely saving his wife, and he isn’t afraid of turning on The Boys to do so. “How far is Butcher willing to go? How much is he willing to sacrifice?” Urban said. “Will he again jeopardize his team?”

Hughie, meanwhile, is a lot less trusting of Butcher than he once was. “There’s one moment early on where — spoilers — Butcher comes back and Hughie’s not excited about it, and he gives Hughie the old classic ‘Kenan and Kel,’ ‘we’re gonna do this thing, it’s gonna be great, you’ll love it,'” Quaid said, impersonating Urban. “After that, Hughie says, ‘No, I never love it.'”

There Will Be Some New Team-Ups

Both Urban and Moriarty teased that Butcher and Annie will work together in some capacity, with Moriarty saying that Annie holds onto her morals but “she’s forced to adapt to this dark world that she’s been exposed to.”

“That’s where some really interesting storylines come in, like collaborating with characters and doing team-ups that you would never anticipate, and exploring dynamics between her and Hughie, for example, who’s broken her heart,” she said.

“And then she’s got Butcher, who shot her in the chest. Yet she’s gotta kind of join forces with him,” she added. “Her objective remains the same, but she hardens a lot as a result of Season 1.”

Homelander and The Deep Will Be Looking Inward

“Season 1 was very external, whereas Season 2 is very internal,” Starr said about Homelander, the secretly evil Superman-esque figure who was dealing with a serious Oedipal complex in Season 1 in the form of Stillwell (Elisabeth Shue), who he killed in the finale. “He finds traces of Stillwell, and reconnects that way, and that is a moment of pure connection for Homelander and Stillwell,” he said after Tyler showed a photo of Homelander sipping what is likely Stillwell’s breast milk.

The Deep, meanwhile, was sent to Ohio in Season 1 after Annie revealed to the public that he had sexually assaulted her. Crawford said The Deep “was very ripe for getting pulled into a certain kind of spiritual journey.” “He goes on a few different quests to find love and find connection in that way,” he said.

Season 2 will reveal quite a bit about some of the members of The Boys that audiences don’t know too much about yet. In the comics, Alonso explained, Mother’s Milk was born with Compound V in his blood, but in the show, he instead has “infection with being a fighter of freedom.” “That’s what he’s infected with: risking what he has in the pursuit of justice.”

Tyler also teased that there will be reveals about where Kimiko came from and why she doesn’t speak. “Her relationship with her history that we find out in Season 2 also alters the relationship she has with Frenchie a little bit,” Fukuhara said, with Capon adding that Frenchie will get his own “origin story” in the new episodes.

Watch a clip from Season 2 — where The Boys drive a boat into a whale that The Deep tried to use to stop them — below.