‘The Boys’ Renewed for Season 3 at Amazon, Adds After-Show 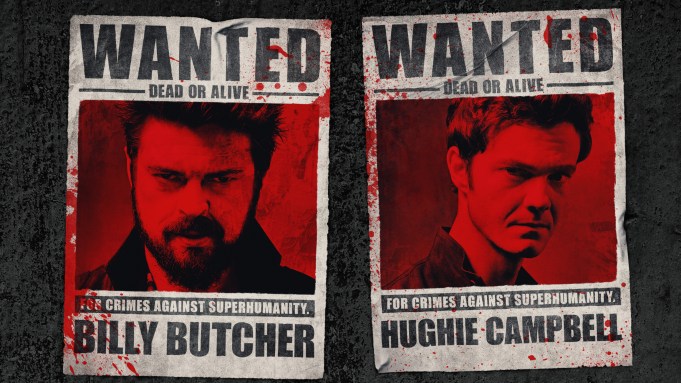 “The Boys” will be back once again — Amazon Prime Video has renewed the superhero and vigilante drama for a third season, the streamer announced Thursday.

Additionally, the second season will deliver an after-show entitled “Prime Rewind: Inside The Boys,” hosted and executive produced by Aisha Tyler. While the second season of “The Boys” premieres on Sept. 4, delivering three episodes at launch with the subsequent five dropping weekly through Oct. 9, the after-show will start on Aug. 28 with a look back at the series so far.

“Eric Kripke and the incredible cast of ‘The Boys’ continue to deliver a wild and action-packed series full of surprises and can’t-miss moments that have made the series a global hit,” said Vernon Sanders, co-head of television, Amazon Studios. “We couldn’t be more excited to see where Eric takes ‘The Boys’ and the supes in Season 3, and to have Aisha Tyler join ‘The Boys’ family as the host of ‘Prime Rewind: Inside The Boys.’”

Added Jeffrey Frost, president, Sony Pictures Television Studios: “‘The Boys’ is unlike any other show on television. It’s incredibly entertaining and compelling and elevates genre programming to a whole new level. We’re very excited about Season 3 as we know Eric Kripke and this incredibly talented cast are going to raise the bar even higher. And ‘Prime Rewind: Inside The Boys’ is the perfect show to bring it all home.”

In a statement creator and showrunner Eric Kripke said the writers’ room is already up and running (virtually) for the new season.

“The world has given us way too much material. We hope to be shooting in early 2021, but that’s up to a microscopic virus,” he said.

Addressing the after-show, Kripke noted that the “double entendre” of the title was intended. “It’s a deep dive into how we make this insane thing. Seriously, thanks to Sony, Amazon and the fans. We love making this show so much, and we’re thrilled we get to make more.”

Added Tyler: “‘The Boys’ is one of the smartest, most irreverent, unapologetically badass shows streaming. I became a fan during Season 1 and this season I’m stoked to be flying fans into the heart of the show as host of ‘Prime Rewind: Inside The Boys’ Season 2 is bigger, badder, and more audacious than ever before, so join me after every episode as we dig through the rubble pile of our feelings. I promise, we’ll get through it like ‘The Boys’ — dysfunctional, but together.”

The second season of “The Boys” sees the titular vigilantes on the run and hunted by the superheroes (or “supes,” as the show calls them). Hughie (Jack Quaid), Mother’s Milk (Laz Alonso), Frenchie (Tomer Capon) and Kimiko (Karen Fukuhara) are in hiding after the explosive events of the first season finale, while Butcher (Karl Urban) is off on his own for a bit. Meanwhile, Homelander (Antony Starr) is trying to expand his power in a few new ways and Starlight (Erin Moriarty) is trying to navigate her own place in the Seven as the group shifts. Stormfront (Aya Cash), a social-media savvy new supe, comes in with an agenda of her own, while a larger threat looms, leaving Vought seeking to capitalize on the nation’s paranoia.

“Our show wants you to question superheroes, and therefore fascism and authoritarianism, because they’re closely related,” Kripke tells Variety. “Strongmen tell the public they’re the only ones who can save them. They use the media and their own celebrity to manipulate the masses and shout down any dissenters. I think one downside of the glut of superhero media is that it trains the audience to adulate figures who seem strong, to wait for these figures to solve their problems. When the truth is, anyone who says they can save you is a liar and a con man. Real heroism is a thousand tiny gestures, boring and painful, performed by us all. We have to save ourselves.”