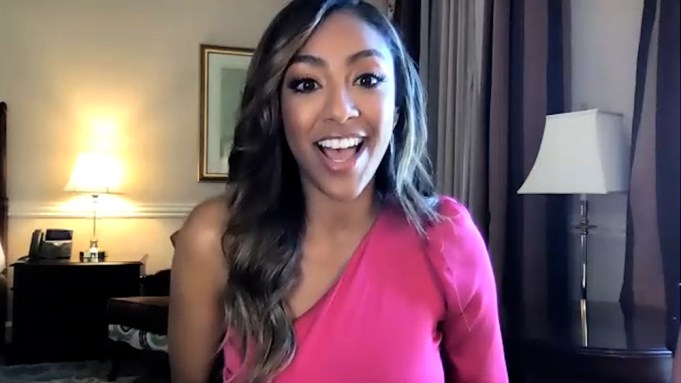 This week’s episode of “The Bachelorette” saw many firsts.

Tayshia Adams replaced Clare Crawley as the season’s leading lady, after Crawley made an unprecedented exit early on the season — and Adams became the second woman of color to step into the role of “The Bachelorette.”

“I just love that I have the opportunity to be a voice for girls that look like me [and] identify with me that I didn’t have growing up,” Adams tells Variety. “Everyone deserves love, no matter who you are, and I’m so happy that I have the journey as ‘The Bachelorette’ to be a representative of that.”

Adams — who is Black and Mexican, and identifies as biracial — became the second “Bachelorette” of color, following Rachel Lindsay, who was the first-ever Black “Bachelorette” in 2017. Early next year, ABC will introduce a Black “Bachelor” with Matt James, who is the first Black leading man, since the franchise premiered in 2002.

As the push for representation continues in the entertainment industry and in politics, Adams says she recognizes the significance of this moment, especially after Kamala Harris became the first woman and the first woman of color to be elected as Vice President of the United States.

Before Adams stepped in as “The Bachelorette,” Crawley marked another first for the franchise: she was the oldest leading lady, at the age of 39.

Though there have been naysayers, Crawley explains that she was able to find love so quickly (two weeks!) with contestant Dale Moss because she knew exactly what she wanted, after having spent so many years dating men who didn’t deserve her. Hoping to eradicate the stigma of being single into your late ’30s, Crawley has now found her happily-ever-after, as she is engaged to Moss, after meeting on national TV.

The love-at-first-sight situation sent the season into a tailspin with Crawley essentially ignoring every contestant, aside from Moss, forcing producers to explore a backup “Bachelorette,” incase Crawley departed the season early, which did, in fact, end up happening after just a few weeks on-set.

Adams says she got a phone call from a producer who informed her that Crawley was finding love very early in her season, and it might be a possibility for Adams to step in and replace the original star.

“Clare is finding love and we still have some fantastic men who also want to find love,” the producer told Adams, she shares.

However, Bachelor Nation has been questioning the major switch between Crawley and Adams.

Providing clarity on the timeline of when she was brought in to officially replace Crawley, Adams explains, “I got a phone call that it was moving in a direction that she was able to find her person, and that if it was possible for her and [Dale] to get engaged, then it was opportunity for me. Nothing was guaranteed though. It was definitely shared to me that, ‘If it does move this way, then we would love for you to come.’ If not, then I’m not sure what would have happened.”

Now that she has made her TV debut as “The Bachelorette,” Adams — who also hosts the newest Bachelor Nation podcast, “Click Bait with Bachelor Nation” — is thrilled to be out in the open.

“I feel like I can actually breathe,” she says. “It’s been something that has been so exciting that I’ve been wanting to obviously share and I’m asked about it constantly, and I had to just continue to play coy, but it’s so great to be able to say that I’m ‘The Bachelorette!'”