‘The Bachelorette’ Recap: Clare Crawley Looks for Love in Quarantine 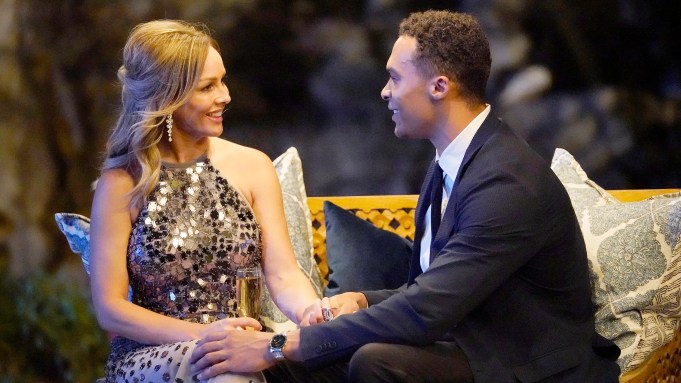 SPOILER ALERT: Do not read if you have not yet watched the October 13 season premiere of “The Bachelorette.”

For once, maybe Season 16 of “The Bachelorette” could be the most dramatic ever.

The tagline was familiar, but this season’s conditions were anything but for viewers during Tuesday night’s premiere. Host Chris Harrison said it best: “How are we going to make a romantic dating show during times like these?”

It started with a production delay. After Clare Crawley was announced as the lead back in March, production — and the world — was shut down amid the global coronavirus pandemic. Since then, production recast, found a new location and established a safety isolation bubble within La Quinta Resort and Club in Palm Springs, Calif. After a four-month hiatus, Clare and her 31 men were finally welcomed back for a chance to find love. While the environment and conditions had shifted, the core of the show ultimately remained the same.

This isn’t Clare’s first attempt to find love within “The Bachelor” franchise. Before becoming the oldest Bachelorette at 39, she made several rounds as a contestant. She was originally a finalist during Juan Pablo Galavis’ season of “The Bachelor.” She then appeared on the first two seasons of “Bachelor in Paradise” where she left voluntarily. Most recently, she was on “Bachelor Winter Games,” which led to an engagement to Benoit Beauséjour-Savard — but the couple split roughly a month later.

Her new batch of suitors showed up and immediately quarantined, and were documented along the way.

In lieu of traditional introduction packages, the men filmed isolation vlogs. Their travels were captured — in masks –- on cell phone footage, and their adventures inside their hotel consisted of reading, bubble baths, face masks, playing chess alone and jumping on the bed. They were all COVID-tested multiple times and cleared before Night 1 began.

The limo entrances brought a sense of normalcy to the show, with the theatrics of season’s pasts. Uzoma “Eazy” Nwachukwu jumped through a “Your Future Husband” sign; Ed Waisbrot showed up in a literal “bubble,” and AJ Yalawan nearly broke Clare’s finger from holding her hand so tightly while he talked about his bad first impression. There were costumes: Jason Foster sported a pregnant stomach in homage to Clare’s original entrance on Juan Pablo’s season; Kenny Braasch had a shirt made of photos of her dogs; Joe Park came as a doctor to save her “love life”; Jay Smith showed up in straight jacket, and Chasen Nick arrived in a suit of armor. There were distinct and unique modes of transportation, as well: Bennett Jordan rolled up in a Rolls Royce; Tyler Cottrill showed off his station wagon, and Demar Jackson dragged a parachute after he had “already fallen” for Clare. And lastly, there were gifts and food, from Mike Tobin bringing sandals for when her feet hurt, to Yosef Aborady bringing moon pies and Jordan Chapman bringing popcorn.

But no entrance was more memorable than that of Dale Moss, the former pro football receiver from South Dakota, simply because of the titular Bachelorette’s reaction: “I definitely feel like I just met my husband,” she proclaimed in the driveway. “I felt everything that I haven’t felt ever.” (Later in the night, Dale received her first impression rose.)

As the last limo entrances trickled in, Clare began casually mingling with the men. Blake Moynes joined Dale as a standout, as it was revealed that he reached out to Clare during quarantine before filming had begun. It was a violation of the show’s policies, as contestants were required to not contact the lead prior to their isolation. However, the risk turned to be successful. “You risked not coming on here and putting that on the line,” Clare said. “It meant everything to me.”

Yosef paved his path as the season’s villain after Tyler C. accused him of sliding into women’s messages in his hometown. The confrontation led to Clare sitting them down and having them hash it out in front of her before she excused herself to meet the other men.

“The Bachelorette” airs on Tuesdays at 8 p.m. on ABC.