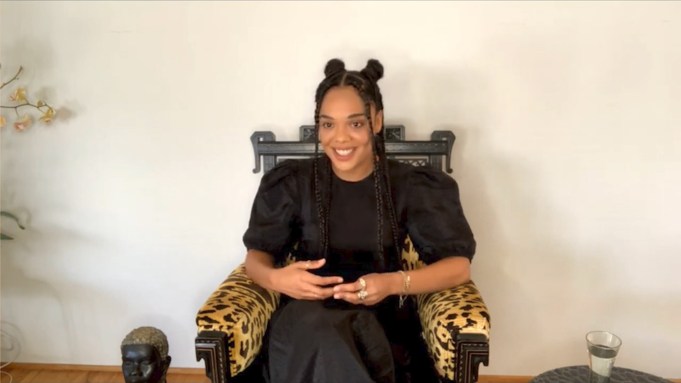 “Westworld” season 3 upped the action for Tessa Thompson’s character Charlotte Hale, and she loved every bit of it.

In her “Actors on Actors” conversation with Ramy Youssef, star and creator of Hulu’s “Ramy,” Thompson said she got to go “full Terminator” in some of the intense action sequences on the latest season.

She first tried to explain her complicated story arc on the HBO show’s latest season, which involved some sci-fi body switching. In the first season of “Westworld,” she played a top executive at the robot theme park. Later, she was killed and replaced by a host, a robot replica who could pass for human.

However, season 3 revealed that it wasn’t Charlotte’s consciousness inside her host body, but Dolores Abernathy’s (Evan Rachel Wood), a host who escaped Westworld and had a nefarious plan for the rest of humanity.

“There’s so much fun to play with that. For example, when I’m playing Charlotte, my old character, there’s this idea that the host wants to appear as human as possible, and they can do that flawlessly because they’re these extraordinary machines,” Thompson said. “But when humans aren’t looking, there’s this whole action sequence. Suddenly when I don’t have the responsibility of appearing human, I can do things like shoot a person without looking at them. I have this superhuman ability and that is so fun to do. It was like full Terminator.”

Starring as Valkyrie in Marvel’s “Thor: Ragnorak” and “Avengers: Endgame,” Thompson knows a thing or two about playing actual superheroes. She added that action movies feel more liberating than dramas and tap into a nostalgic feeling of playing cops and robbers, though noting that the childhood game may not be a suitable analogy due to the current protests against police brutality.

“That’s the kind of stuff that I feel like is pure imagination,” she said. “I love being able to do drama and things based in real sincerity. For me, there’s something so liberating about these huge set pieces and having to do action because it feels like it occupies this childlike space of pure — I was going to say cops and robbers, but I don’t even want to talk about cops or robbers anymore.”