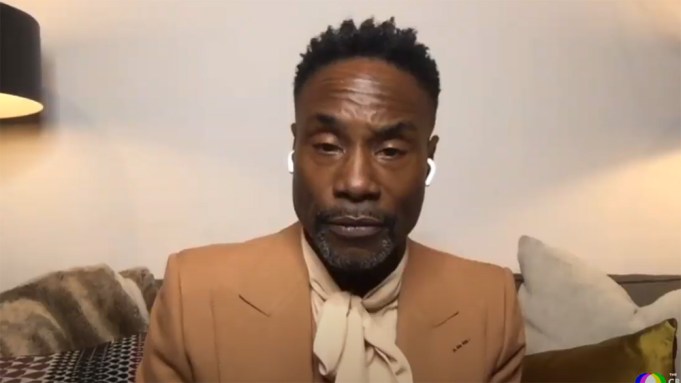 Aduba joined Heifer International, a global nonprofit organization dedicated to eradicating poverty and hunger, as an ambassador to Africa. As part of her advocacy, she connected with grassroots organizers in Abuja, Nigeria, to increase accessibility to clean drinking water during World Water Day in 2019. In accepting her award, Aduba called on viewers to support the organization and the communities that are facing income insecurity as a result of the pandemic.

Television, film and Broadway star Phylicia Rashad was honored for her commitment to diversifying American history as the co-chair of the African American Cultural Heritage Action Fund.

“Feeling like I grew up knee-deep in history, the importance, the value and the necessity of this great work has never been lost to me,” Rashad said. “Historic preservation honors the past, yes, but it also gives context to the way we live today.”

Following Rashad’s speech, Jason Isaacs spoke about arts preservation and funding, The Creative Coalition’s mission. A banner asking for donations to the organization was displayed throughout the event.

Kermit the Frog, interrupted by his doppelganger Constantine, presented a humanitarian award to Ricky Gervais, their co-star in “Muppets Most Wanted,” for his work in promoting animal welfare.

“I’ve always loved animals, so it’s an absolute privilege to be able to use my platform to shout for them, as they don’t have a voice — Muppets don’t count,” Gervais said. “To me, all animals are unconditionally beautiful and perfect, so it’s depressing that one species in particular seems hellbent on destroying all the others.”

“I know we all feel this huge responsibility to give back and make a difference … and I commend my colleagues tonight for their dedication and for resolutely holding to the belief that even during these troubling times, that we can and we will improve the lives of others,” Miller said.

During the middle segment of the event, pharmaceutical company and sponsor Novo Nordisk showcased a PSA on obesity. More than 40% of Americans are obese, which is the primary risk factor for contracting a severe case of COVID-19 for people under 60.

Renee Rawls, a Novo Nordisk patient who lives with obesity, introduced a roundtable with the cast and producers of “New Amsterdam.” The honorees discussed the necessity of uplifting stories of public relevance through the show, such as obesity, discrimination and mental health.

“It’s not enough for us to highlight an issue, which is important, but we want to offer something, we want to bring something to the table on the issue that’s not just awareness,” the show’s creator, David Schulner, said. “Part of what the show does best is … we want to actually show a solution to a problem.”

“Insecure” star and creator Issa Rae introduced the following recipient of the award, her co-star Yvonne Orji, who serves as an ambassador to the Innocence Project, which works to overturn wrongful convictions.

Recalling when she heard of Orji’s nomination, she said “What took y’all so long? Because Yvonne is one of the most dedicated, considerate, caring, passionate, most hardworking people I know … When I think about this particular time — this particularly devastating, hopeless time — a time where so many Black people feel frustrated and neglected by a system stacked against us, I find comfort that Yvonne is consistently using her voice to speak out on our behalf.”

Actor and director Melora Walters presented Mira Sorvino with her award for her work with Amnesty International and the UN as an ambassador campaigning to end human trafficking. Sorvino has also aided in the passage of #MeToo laws.

The Creative Coalition is awarding grants to three filmmakers selected to produce short films about individuals with obesity, Malkin announced.