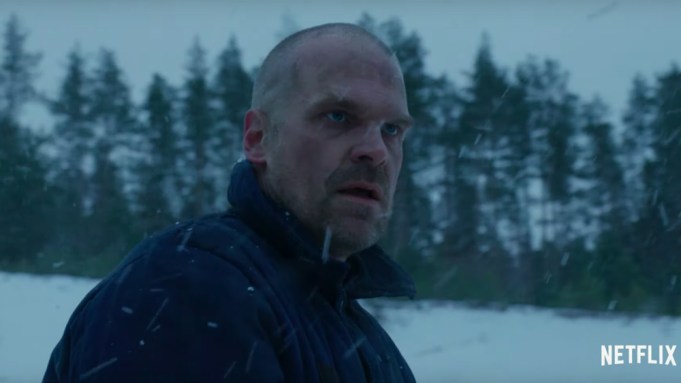 Netflix dropped a Valentine’s Day treat on Friday morning in the form of a teaser for “Stranger Things 4.”

The teaser, aptly titled “From Russia With Love,” reveals that David Harbour’s Hopper is alive … and in Russia.

The 50 seconds of footage shows everyone’s favorite small-town police chief, along with a group of men, imprisoned and toiling away on a railroad track in frigid weather under the scrutiny of heavily armed Russian guards. Hooper, now thinner and sporting buzzed hair, takes off his ushanka-hat and stops working for a second to look into the distance.

“We’re excited to officially confirm that production on ‘Stranger Things 4’ is now underway — and even more excited to announce the return of Hopper,” “Stranger Things” creators and showrunners Matt and Ross Duffer said. “Although it’s not all good news for our ‘American’; he is imprisoned far from home in the snowy wasteland of Kamchatka, where he will face dangers both human…and other. Meanwhile, back in the states, a new horror is beginning to surface, something long buried, something that connects everything…”

“Season 4 is shaping up to be the biggest and most frightening season yet, and we cannot wait for everyone to see more,” the Duffer brothers added. “In the meantime — pray for the American.”

Hopper was presumed dead at the end of Season 3 after defeating the Russian Terminator and helping close the rift between the real world and the Upside Down (he even said goodbye to Joyce), although fans have been theorizing for months about ways he could have survived.