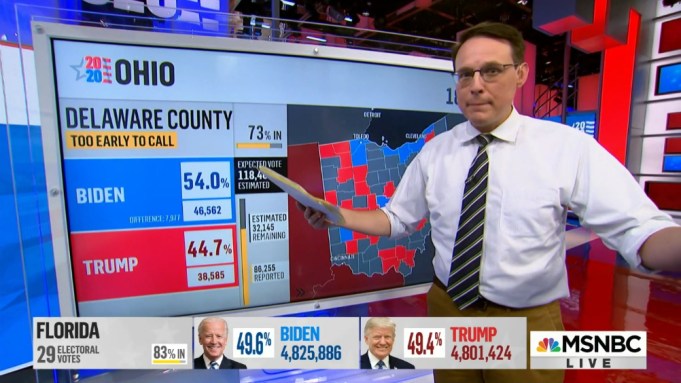 MSNBC’s election night coverage featured a bevy of the cable newser’s all-stars, including Rachel Maddow, Brian Williams, Joy Reid and Nicolle Wallace. But, as was clear to anyone watching Tuesday night, the breakout of the evening was political correspondent Steve Kornacki, master of the interactive touchscreen map that has become a staple of TV news political coverage.

Every network has someone in this role. On CNN, for instance, John King has long served as master of the interactive electoral map. But none brings to the job the Charlie Kelly “Sweet Dee Has a Heart Attack” vibe that Kornacki does, with his shirt sleeves and striped necktie.

steve kornacki off to a strong start, but the coaches are going to need to figure out how to get him some rest around the TV timeouts. he’ll need his legs for the fourth quarter.

Early in the evening, Kornacki took a back seat to Maddow and interviews with the likes of Rep. Jim Clyburn and political strategist David Plouffe. But Kornacki teased some of what was to come when he delivered his first “Holy cow!” of the night, looking at a big lead for Biden in very early voting in Kenton County, Ky. But as the night continued, Reid and Wallace were brought to near silence, while Williams and Maddow’s primary jobs seemed to be throwing to Kornacki or asking him questions.

Kornacki was such a hot property that even as Williams spoke with Michael Steele of the Lincoln Project, a split screen image labeled “Kornacki Cam” showed a live shot of Kornacki’s rear end as he fussed with with his touch screen.

The strain in Kornacki’s voice as he said things like, “We still don’t have Leon County! We still don’t have Miami-Dade!” seemed appropriate to coverage that constantly reminded us that, by the time these journalists signed off, we still might not know the most important elements of the story they were covering.

But Kornacki’s intense focus on the red and blue map in front of him also captured the mood of the moment, as it did when shortly after 9 p.m. ET, he was so engaged in a display of data from Ohio counties that he didn’t hear the throw to him. When Kornacki snapped out of his reverie (“Oh! Am I on?”), Maddow could be heard calling in the background.

A veteran political journalist, Kornacki has written for the New York Times and Wall Street Journal, and has been at MSNBC and NBC News for several years.