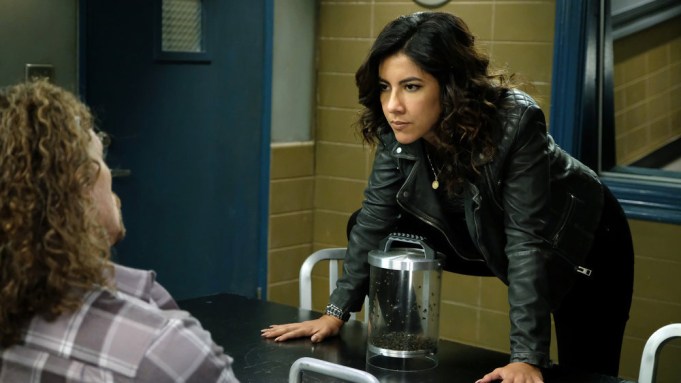 Fans of sitcom “Brooklyn Nine-Nine” are often perplexed when they hear actor Stephanie Beatriz in real life: Unlike the the throaty register Beatriz speaks in as Detective Rosa Diaz on the show — perfectly suited for the deadpan quality she delivers her lines — her actual voice is upbeat and pitched about an octave higher.

“They’re very confused,” Beatriz, who is now in her seventh season on the show, tells Variety.

In 2017, the show’s 99th episode featured a storyline personal to Beatriz: Rosa coming out as bisexual. Beatriz worked with executive producer and writer Dan Goor on bringing empathy to Rosa’s story, drawing on Beatriz’s own experience as a queer Latinx woman. Beatriz recalls family and friends dismissing her bisexuality as a “phase” or that it “wasn’t real.”

Beatriz, who immigrated with her family to the U.S. from Argentina when she was 3, also stars as Carla in the upcoming film adaptation of Lin-Manuel Miranda’s hit Broadway play “In the Heights,” directed by Jon M. Chu.

The musical film, for which the trailer dropped in December, moved Beatriz to tears when she screened the portion featuring the song, “Carnaval del Barrio.” She says it’s the first time she has seen the diversity of the Latinx community represented in film.

“The breadth of skin colors, bodies, ethnicities — it runs the gamut,” says Beatriz. She adds that it will show audiences that being Latinx is “not one shade. It’s not one from one place. It’s not one type of culture. It’s a beautiful diaspora of people.”

But one thing proved particularly challenging for her and her fellow cast members: the dancing. Beatriz recalls waking up at 5 a.m. ahead of rehearsals to practice choreography and the humbling experience of doing it alongside professionally trained dancers.

“I’m flop sweating now just thinking about it,” she says.

Watch Stephanie Beatriz’s full interview in the Variety studio above.