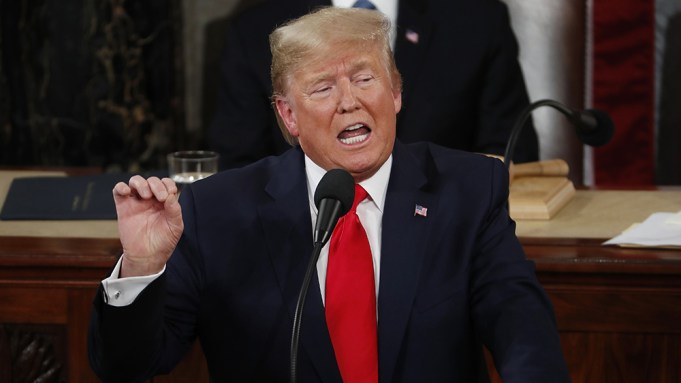 In an evening filled with surprises and theatrics, President Donald Trump awarded conservative radio show host Rush Limbaugh — who recently revealed his advanced lung cancer diagnosis — with a Presidential Medal of Freedom in the middle of in his third annual State of the Union address Tuesday night.

“Rush Limbaugh, thank you for your decades of tireless devotion to our country,” said Trump to applause. “And Rush, in recognition of all that you have done for our nation, the millions of people a day that you speak to and that you inspire and all of the incredible work that you have done for charity, I am proud to announce tonight that you will be receiving our country’s highest civilian honor, the Presidential Medal of Freedom.”

Trump then paused to ask First Lady Melania Trump present Limbaugh with the medal. According to a Politico report earlier in the day, Trump had told TV network anchors in a private lunch Tuesday that he was planning to give Limbaugh the award and had extended a last-minute State of the Union invitation to the radio host. Trump had indicated a desire to present the medal during the event itself, said the outlet, citing sources, but that it could also happen as early as next week.

That was not the only reveal of the night. Trump also introduced Sergeant First Class Townsend Williams to the chamber, surprising Williams’ wife and children with an early return from deployment.

He also surprised a grade-school student with an “opportunity scholarship” to attend the “school of [her] choice,” then called on Congress to pass the Education Freedom Scholarships and Opportunities Act.

The night began with Republicans chanting “Four more years!” and Trump snubbing House Speaker Nancy Pelosi’s extended handshake. During the State of the Union remarks on Tuesday — notably the day before his impeachment trial will wrap up — Trump touted America’s economy and appeared to position the last three years of his presidency as a step toward his “Make America Great Again” campaign.

“Our country is thriving and highly respected again,” said Trump in the House chamber where he was impeached just a few months ago. “America’s enemies are on the run, America’s fortunes are on the rise, and America’s future is burning bright. The years of economic decay are over.”

The language used contrasts with his inaugural address at the start of 2017, in which Trump painted a picture of “American carnage” and “rusted-out factories… scattered like tombstones across the landscape.”

“The days of our country being used, taken advantage of, and even scorned by other nations are long behind us,” said Trump on Tuesday. “Gone, too, are the broken promises, jobless recoveries, tired platitudes and constant excuses for the depletion of American wealth, power and prestige. In just three short years, we have shattered the mentality of American decline, and we have rejected the downsizing of America’s destiny. We have totally rejected the downsizing.”

He also took a swipe at Democratic efforts to push for Medicare for All.

During the more than hour-long speech, Trump celebrated one of the last surviving Tuskegee airmen, Charles McGee, who he just promoted to Brigadier General, and McGee’s Space Force-aspirant grandson. He also hailed Venezuelan opposition leader Juan Guaido, who was in attendance, as the “true and legitimate president of Venezuela,” while calling Nicolas Maduro an “illegitimate ruler” and a “tyrant who brutalizes his people.”

As Trump wrapped up his remarks, Pelosi tore up a printed copy of his remarks while still standing behind him.

Pelosi and other House Democratic women wore white to the address to support “show support for the ongoing fight to achieve equality for women across the country,” according to a tweet.

Proud to join my fellow @HouseDemWomen today as we #WearWhite to show support for the ongoing fight to achieve equality for women across the country. pic.twitter.com/EF3C0idZxc

Representative Tim Ryan, who represents Ohio’s 13th District, tweeted about half an hour before the end of the speech that he had walked out.

“It’s like watching professional wrestling,” he tweeted. “It’s all fake.”

I just walked out of the #StateOfTheUnion. I’ve had enough. It’s like watching professional wrestling. It’s all fake.