A ‘Mandalorian’ Movie? Pedro Pascal and Jon Favreau on the Future of the Newest ‘Star Wars’ Franchise 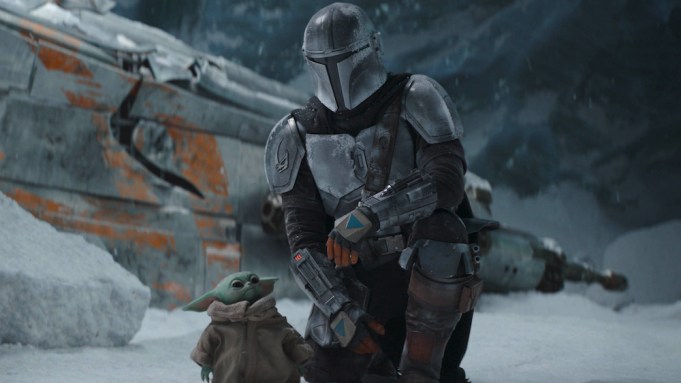 Less than a week after Pedro Pascal wrapped production on Season 2 of “The Mandalorian,” the entire entertainment industry — and much of the world — effectively shut down in the wake of the growing threat of the COVID-19 pandemic. With the new season of the mega-hit “Star Wars” series now set to premiere on Disney Plus on Oct. 30, it appears that Pascal’s titular bounty hunter once again narrowly escaped a Death Star–sized disaster.

It did not quite feel like it at the time.

“I didn’t really stop to consider [the pandemic], because, unfortunately, the news has for me been causing alarm in so many different ways that it was almost just another version of that,” Pascal told Variety during his interview for the Oct. 14 cover story about the actor. “I can’t say that I totally didn’t see it coming, because unconsciously I sort of snapped to it in a way that must have been somewhat prepared. What I wasn’t prepared for is” — his eyes went wide — “six months.”

Soon enough, Pascal will slip on his character’s signature helmet once more. Executive producer and showrunner Jon Favreau told Variety that “The Mandalorian” is “on schedule” to start production on Season 3 of the series “before the end of the year” — after Pascal wraps shooting in Europe on the feature film “The Unbearable Weight of Massive Talent” with Nicolas Cage.

“We’re operating under the assumption that we’ll be able to go forward,” Favreau said. He noted that the innovative production technique pioneered for “The Mandalorian” — with wall-sized video panels for location backdrops — puts the show in a unique position within the industry.

“We’re in very small situations and oftentimes we have a lot of characters in masks,” he said. “And we also have a lot of digital work that augments things. So we’re a show that’s probably well-equipped to be flexible based on the protocols that are emerging surrounding work restarting.”

Those methodologies have allowed “The Mandalorian” to employ the same vast sense of scope as the “Star Wars” feature films while operating within the leaner budget and footprint of a TV production. The results have been nothing short of sensational. The show’s global popularity — thanks in no small part to the instant pop-culture icon Baby Yoda — catalyzed Disney Plus’ massive subscriber growth to over 60.5 million worldwide in less than a year. Within weeks of launching with the service last November, “The Mandalorian” became the new “Star Wars” standard bearer — especially after “Star Wars: The Rise of Skywalker” concluded the nine-film Skywalker Saga with the lowest grosses of Disney’s Skywalker features and outright loathing by many “Star Wars” fans.

In a February earnings call, Disney’s then-CEO Bob Iger said that after the Season 2 premiere of “The Mandalorian,” future seasons will include “the possibility of infusing [the show] with more characters and the possibility of taking those characters in their own direction in terms of series.” In other words, expect “The Mandalorian” to spawn its own “Star Wars” creative universe.

Asked about that possibility last month, Favreau was a bit more cautious.

“I love the world of ‘Star Wars’ because, on the one hand, there’s a familiarity with this sub-genre, but there’s also a tremendous amount of flexibility of which way you can go and genres you could explore within that sub-genre,” Favreau said. “As we’re meeting new characters, and as we’re starting to hit our stride, from a production standpoint with how this technology can be used, we are beginning to explore where we could go.”

Favreau did allow that the faster metabolism of TV production meant Lucasfilm can be more responsive to audience sentiment about the show. “And we could start to expand what we’re doing and our ambitions about what characters we want to follow,” he said.

The filmmaker also said his experience as the inaugural director of the Marvel Cinematic Universe with “Iron Man” and “Iron Man 2” has informed his outlook for the future of “The Mandalorian.”

“I learned a lot from my experience over at Marvel, where it was very organic, how it would evolve,” he said. “You’re paying attention to a larger story arcs and characters that could come together, but also smaller stories of individual characters that could go off [on their own thing]. The key here is keep maintaining the quality and never scaling to the point that we’re losing sight of what’s important to us and what people like about the show.”

The first Disney Plus series produced by Marvel Studios, “WandaVision” with Elizabeth Olsen and Paul Bettany, is due to premiere later this year, with several more to follow in 2021, and Marvel chief Kevin Feige has said that their storylines will intertwine with the Marvel Studios theatrical features.

Could the same happen with “The Mandalorian”?

“The line is blurring now,” said Favreau. “Things that you would have only seen in the movie theater, you’re seeing on streaming, and I think it could go the other way as well.”

Whether that means Pascal’s tight-lipped bounty hunter could end up on a movie screen remains a tantalizing if uncertain possibility. Favreau said he’s in “no rush” to push the show beyond a streaming series. “But we’re definitely open to it,” he added, “and excited to see where the story leads us and have that flexibility — because there’s no rulebook now.”

“Technology is always offering new opportunities to tell stories in a fresh way,” he added. “It’s a very exciting time to be doing this and I feel very grateful that we’re able to be able to work remotely, because of the nature of the technology that we’re dealing with. So we’re continuing to try to move forward and keep the ball rolling, even though it’s been a challenging time for everyone.”

As for Pascal, the actor said he would “love” to make a “Mandalorian” movie, but he’s heard no discussion of one as of now.

“I think that the work is so beautiful that I would love for that to be held by a big screen experience,” he said. “But it seems to work so well that also I’m not sure it’s something that I would want corrupted by any kind of change, you know? I mean, I certainly know that the challenge can be met. It’s not like these people don’t have the experience. If anybody can do it, they can!”