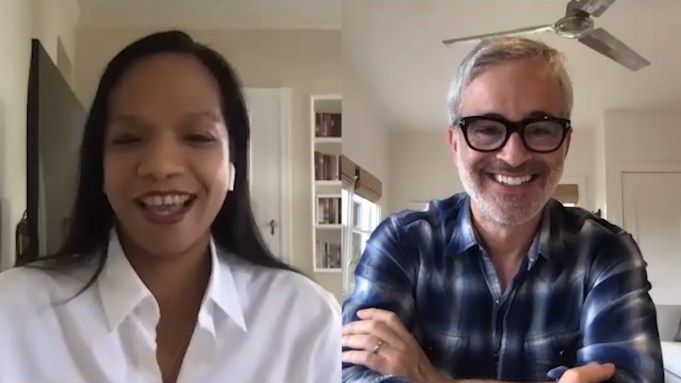 The “Star Trek” franchise has a fan-following like no other. The creatives behind the long-running show are back with “Star Trek: Short Treks,” 10 to 15 minute stand-alone stories that allow audiences to dive deeper into the key themes and characters from “Star Trek: Discovery” and “Star Trek: Picard.”

Before joining the creative team, Kurtzman grew up on the “Star Trek” series. “One of my best friends when I was in elementary school, his dad worked at JPL, the jet propulsion laboratory, and they would watch Star Trek as a family every Saturday,” he recalled. “That was my first introduction to it, and it was the first time that I recognized that it was a science fiction opera that actually had a very direct impact on people who were making science.”

He spoke of the creative process behind the animated series. After “Picard” Season 2 premiere had dropped, Kurtzman and his team brainstormed a spinoff. From producing a show that required extensive post-production and visual effects, they tried to push the boundaries of what had been considered “traditional ‘Star Trek.'”

He added “Short Treks” also draws inspiration from Pixar shorts. “The miracle of those shorts is how much emotion they bring out of you in such a small period of time and how they uniquely reflect the human condition in these beautiful ways that only animation can,” he said.

“Children of Mars,” a silent episode in the series, for instance, was an experiment to see if his team could tell a story with no dialogue in five minutes, that was as impactful as a Pixar short. “The idea was that the stories wanted to be the kinds of stories that you wouldn’t necessarily have time to tell in a television show, the side stories that are actually just as important emotionally but may not make it to the mainframe of a regular episode,” he said. “So we just had a great time experimenting and finding our way and sort of trying to be brave, as brave as we could be, and letting it all loose.”

The creator also explained “Short Treks” allows fans to explore stand-alone stories, when lacking the time to keep up with the long-running show. But he added viewers are able to understand the shorts and original series on a deeper level, by watching both of them. For instance, the animated episode taps into the emotional thread from “Picard.” “There was this cataclysmic event that obviously shaped Picard’s life, and our concern was that it was an experience that the audience was not necessarily going to feel,” he said. “So we thought, ‘okay, how do we tell the story of that day and everything that happened on that day, but how do we do it in a way that’s very unexpected?'”

On working with the music team, Kurtzman spoke of his collaboration with “Star Trek Into Darkness” composer Michael Giacchino, and director of the eighth episode of “Short Treks.” From working closely with the veteran animation director and composer, he learned that it was “much harder than live-action.” “Unlike live-action, there’s a certain point where you can’t reverse it,” he said. “The animators are drawing. Things are being rendered, and you really can’t change it, so you’re constantly checking in on what you’re doing and whether or not it’s going in the right direction.”

Kurtzman also teased the upcoming “Star Trek: Section 31.” He gave credit to actress Michelle Yeoh who pitched the idea, even before the first season of “Discovery” had aired.

He shared the series will spotlight Yeoh and allow her to be a representation onscreen for other young women who often struggle to find themselves represented in media.

In closing, the creator-producer asked new audiences to try watching an episode of “Short Treks.” While the animated series was created for fans, he believes it has the potential to reach those who are less familiar with its universe. “This is a show for everybody, and we have now given you 10 options,” he said. “There’s got to be a way that somewhere in those 10 options, you’re going to find something you like. And if you like it, hopefully, that will be your gateway drug to one of the shows or the movies or anything in the world of Star Trek.”