The power and importance of diversity and representation was the common theme to emerge from the Star Trek Universe panel on Thursday for the virtual fan convention Comic-Con@Home. While the nearly 80-minute super-panel was light on actual news, the casts of the CBS All Access series “Star Trek: Discovery” and “Star Trek: Picard” used the opportunity to drive home how the “Star Trek” theme of infinite diversity in infinite combinations is as relevant in 2020 as it was when Gene Roddenberry’s show first premiered in 1966. To that end, the panel promoted the NAACP’s Legal Defense and Educational Fund, to which CBS All Access made a donation.

Meanwhile, the cast and creator of the new animated comedy series “Star Trek: Lower Decks” introduced their irreverent characters for the first time, as well as debuting a first look at the show.

The only solid piece of news arrived during the panel’s introduction from Alex Kurtzman and Heather Kadin, executive producers of all three “Trek” shows and the overall creative impresarios of the growing “Trek” TV universe. Kadin revealed that the animated “Trek” series for kids currently in development for Nickelodeon with producers Kevin and Dan Hageman (“Trollhunters,” “Ninjago”) will be titled “Star Trek: Prodigy.” Kadin also introduced the logo for the new series; while she offered no further details, in a release, Nickelodeon revealed that the show will follow “a group of lawless teens who discover a derelict Starfleet ship and use it to search for adventure, meaning and salvation,” and that it will debut in 2021.

Otherwise, there were no big announcements coming out of the “Star Trek” Universe panels. The premiere date for season 3 of “Discovery,” which wrapped production well before the COVID-19 pandemic, remains vaguely in the latter half of 2020, and the cast of “Picard” barely talked at all about what to expect from season 2 of the show, which has yet to go into production.

Still, there were some fun pieces of information to glean from each panel. Here are the highlights. 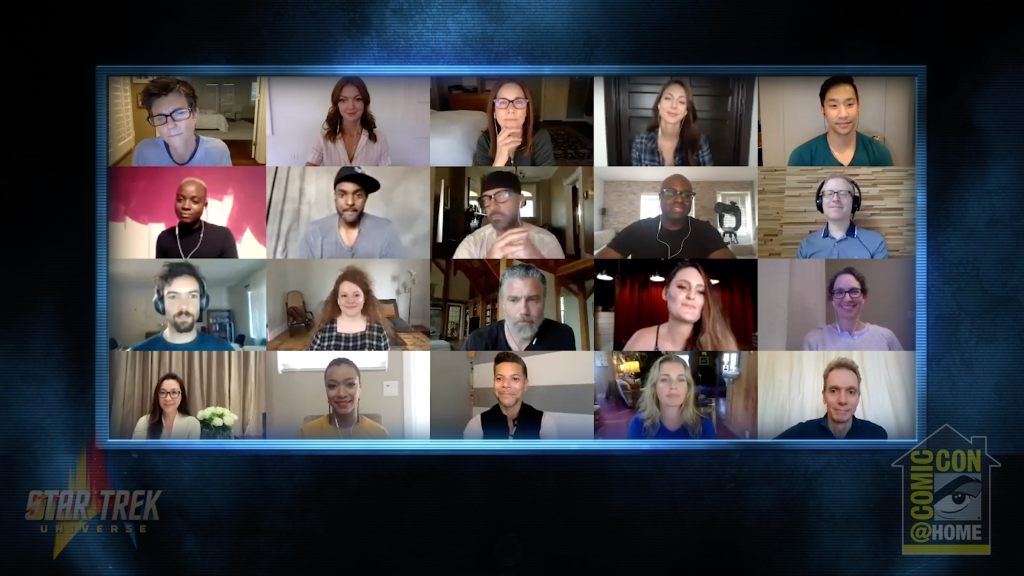 The bulk of the panel for CBS All Access’ flagship “Trek” series was taken up with a live reading from the teaser and first act of the season 2 finale, featuring 18 actors from the episode, as well as director Olatunde Osunsanmi and executive producer and co-showrunner Michelle Paradise. The sequence almost entirely involves a massive battle in space, so the reading was supplemented with storyboards and unfinished visual effects from the episode.

Once the episode concluded, several members of the regular “Discovery” cast spoke at length about how “Discovery” will continue to model a future based on values of meritocracy and egalitarianism.

“‘Star Trek’ … is always meant to imagine a future and a world in which people are valued for who they are, the content of their character, not the color of their skin, not their gender, not their gender expression, not their age,” said Anthony Rapp, who plays Paul Stamets, the first openly gay main character in “Trek” TV history. “In this explosive time it seems more resonant now than ever that we help shine a light on all those issues.”

Wilson Cruz (Hugh Culber) noted that “Trek” has always provided an aspirational model for what society could be in the future. “So I think going into season 3, we have an opportunity to really have a conversation about the world we want to create, and how each of us has a responsibility to create it together,” he said.

While “Discovery’s” lead, Sonequa Martin-Green (Michael Burnham), echoed that sentiment, she also noted that the world of “Star Trek” is far from perfect, which only demonstrates “that the work is not done, that it’s about confronting ourselves and really confronting each other.”

“What’s going to propel us forward is confronting ourselves truthfully and confronting each other,” she continued. “So I hope in our iteration that we contribute moments to the movement in that way.”

Other than acknowledging that the crew of the Discovery ended season 2 by jumping a millennium into the future, there were only a few other morsels of information about what to expect from season 3. Martin-Green said that she hopes Burnham will be “finding that perfect, sweet, sweet balance between all the forces that wage within [her],” to which Paradise said with a knowing smile, “Maybe you’ll explore that in season 3, we don’t know.”

Rapp and Cruz said the season will continue to explore the romantic relationship between their characters, with Rapp emphasizing the theme of family, and Cruz noting that Culber (who came back from the dead in season 2) is a much more “three dimensional” character in season 3.

Michelle Yeoh said that her character, the formidable warrior Philippa Georgiou, starts season 3 “really pissed off” that she’s been pulled into the future, but that she gets over it quickly. “She is one who always finds her way into adapting, because she is a survivor with many skills,” Yeoh said. “Power is something that inherently that she has. She doesn’t even seek it. She just has it.”

The panel concluded with actors Ethan Peck (Spock), Anson Mount (Christopher Pike), and Rebecca Romijn (Number One) lightly teasing their new show “Star Trek: Strange New Worlds,” set on the U.S.S. Enterprise when Pike was captain. While the show hasn’t started production yet (and likely won’t for many months due to the pandemic), Peck said he expects Spock’s experiences with his human sister Michael Burnham to inform his “conflict between emotion and logic.” Mount, meanwhile, noted that since Pike learned in season 2 of “Discovery” that his character will wind up totally paralyzed, he will have to come to terms with what he can contribute with the time he has. 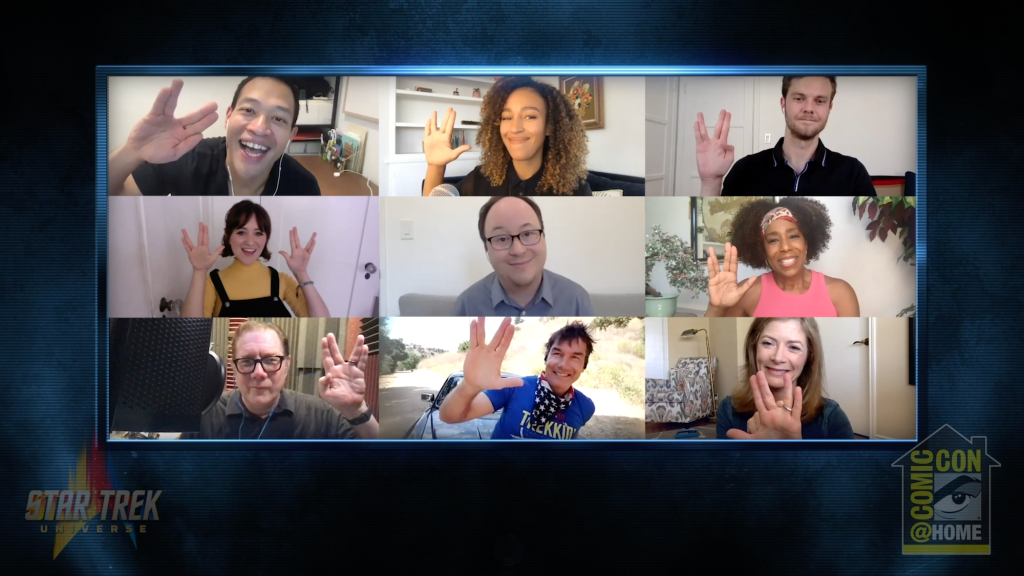 Striking a far more irreverent tone, creator, executive producer, and showrunner Mike McMahan introduced the first comedy series based in the “Trek” universe, which premieres on CBS All Access on August 6. While issues of diversity and social justice didn’t come up during this panel, it was nonetheless self-evident that the show — with a Black female lead and a Black female captain — lived up to the same “Trek” ideal.

After debuting a first look at the opening scene of the show — in which the straight-laced Ensign Boimler (Jack Quaid) has his leg accidentally sliced open with a Klingon bat’leth — McMahan asked the cast to introduce their characters.

The show’s lead, Tawny Newsome (“Space Force”), said that her character, Ensign Mariner, doesn’t like playing by the rules even though she’s hyper-competent, like “when you’re the class clown because you’re ahead of the lesson in school.”

Quaid (“The Boys”) said Boimler is very much the opposite, a “Starfleet nerd” who goes “as by-the-book as possible.”

Noël Wells (“Master of None”) explained her character, medical officer Ensign Tendi, is the “fresh eyes” on the Cerritos, while Eugene Cordero (“The Good Place”) said that the cybernetically-enhanced Ensign Rutherford is “all about the tech talk.”

The core main cast do wind up interacting with the senior officers on the Cerritos, though they’re not the typical Starfleet officers from previous iterations of “Trek.” Dawnn Lewis (“Veronica Mars”) said that Capt. Freeman is “in control and in charge — and she’s going to make sure everybody knows who’s in charge.” Fred Tatasciore (“Star Wars Resistance”) called security chief Lt. Shaxs a trigger-happy Bajoran “who’s got a chip on his shoulder,” and Gillian Vigman (“New Girl”) described chief medical officer Dr. T’Ana as “crusty, curmudgeony, bitter” alley cat with a “gruff” bedside manner.

Then there’s Jerry O’Connell (“Billions”), who plays first officer Commander Ramson, whom O’Connell says “has a pretty short fuse [and] isn’t the easier person to work for.” McMahan noted that O’Connell’s wife, Rebecca Romijn, is also playing a first officer on a “Star Trek” series.

O’Connell grinned. “We’re also very, very good friends with Jonathan Frakes,” he said, referring to the actor who played first officer Commander Riker on “The Next Generation.” “So man, when the three of us get together, I really should live-stream it for everybody.” 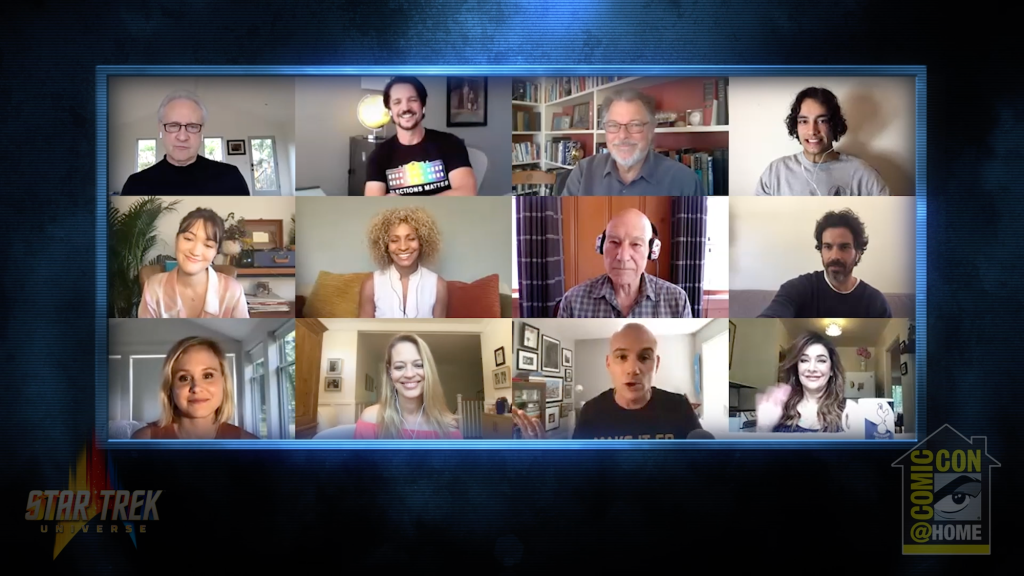 Speaking of Frakes, the panel for the latest “Trek” series served as a bit of a “TNG” reunion, with Frakes joining “TNG” costars Marina Sirtis (Deanna Troi) and Brent Spiner (Data), along with, of course, “TNG” star Patrick Stewart and the rest of the “Picard” cast. Frakes, Sirtis, and Spiner all said they never expected to play their “TNG” roles again after the 2002 film “Star Trek: Nemesis” (though Frakes and Sirtis did reprise the roles for the 2005 series finale of “Star Trek: Enterprise”), and they were thrilled to be able to return to the roles.

“I was just happy, to be honest, that I didn’t have to wear the space suit,” said Sirtis. “I wouldn’t fit in it anymore, so that would be an issue.”

To the at-times visible consternation of moderator Dominic Patten of Deadline, the freewheeling conversation was largely dominated by Sirtis, who teased Stewart about his age, and cheekily scolded the “Picard” actors for gushing over getting to work with Stewart: “Oh, stop it. Stop it! He’s going to be unbearable!”

Spiner, meanwhile, joked (or, at least, appeared to joke) that he was persuaded to return to the role of Data after Kurtzman and showrunner Michael Chabon openly wept when talking to him.

Most of the panel carried on like that, with the actors joking around with each other but otherwise not really betraying any new insights into the making of the previous season or what to expect from season 2. After Alison Pill (Dr. Agnes Jurati) playfully called Stewart “SPS” (i.e. “Sir Patrick Stewart”), several of her co-stars picked up on the nickname during the panel. When Stewart himself mispronounced it as “PCS,” everyone pounced to tease him, leading Stewart to pronounce that he preferred the honorific “P. Stew.”

The panel closed with Patten asking Michelle Hurd (Raffi Musiker) and Jeri Ryan (Seven of Nine) what they hoped they could see in the real world that is from the world of “Star Trek,” which lead to an impassioned speech from Hurd.

“The understanding of how valuable life is,” she said. “Can we all look out for our brothers and sisters? Can we all just take the moment to understand that our differences are actually our strengths, and it’s what makes us a strong species, that we all have these different thoughts, these different looks, these different opinions, these different ways of handling ourselves in the world, of walking down the street. I’m so thankful that I’m part of an organization that gets it.”

You can watch the full panel below.