Spike Lee Tells Jimmy Fallon That History Is Repeating Itself 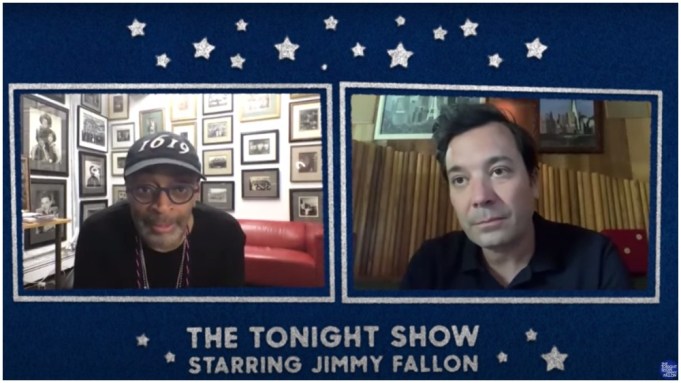 Leading filmmaker Spike Lee told late night TV host Jimmy Fallon that the “world has changed” – a reference to coronavirus, social distancing and the current street protests in favor of #BlackLivesMatter. But Lee went on to suggest that cycles of U.S. police brutality against Black people show that history is repeating itself.

The pair were speaking by video link from their respective homes on Monday night’s edition of Fallon’s “The Tonight Show.”

“Radio Raheem is a fictional character from my 1989 film ‘Do The Right Thing,'” Lee said, as an introduction to his recent “Will History Stop Repeating Itself?” film. The short video intercuts painful-to-watch, real-life footage of the police handling of George Floyd, who was killed two weeks ago, and Eric Garner, killed in New York in 2014, along with the fictional Radio Raheem.

“When I saw Eric Garner, I’m like, ‘That’s Radio Raheem based on Michael Stewart.’ And then to see our brother [George] Floyd, and I know he saw what happened to Eric Garner, so he’s seeing that in his mind as his last eight and a half are being suffocated out of him,” said Lee. Fallon played the clip in full, complete with a graphic content warning.

The pair also introduced Lee’s latest feature film “Da 5 Bloods,” in which four Black (Vietnam) War veterans return to Vietnam. “They are going back to find the remains of their squad leader, played by Chadwick Boseman. And the hitch is, his remains [are] buried among gold,” said Lee.

“[Black leader, Martin Luther King] was among the early opposers to the war. He said it was immoral of a war. In the same way Muhammad Ali said,” Lee added.

The film, which also stars Delroy Lindo, Jonathan Majors and Clark Peters, was largely shot in Thailand as a stand in for Vietnam. It plays on Netflix from Friday.