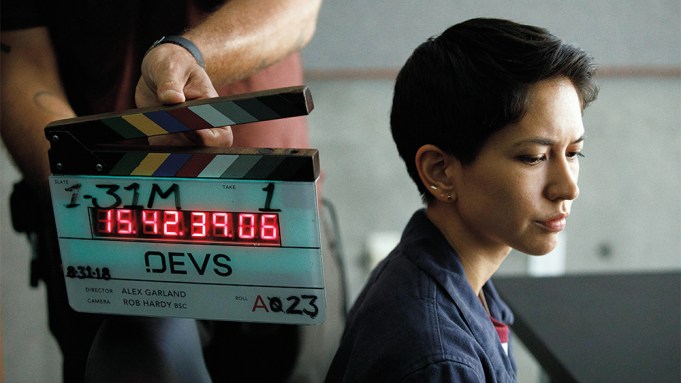 SPOILER ALERT: Do not read if you have not watched the series finale of “Devs” on Hulu.

The sci-fi series centered on Lily Chan (Sonoya Mizuno) who, yes, investigates the sudden apparent suicide of her boyfriend. Both of them work for a quantum computing company, Amaya, founded by the eccentric Forest (Nick Offerman), and whose mascot is a creepy oversized statue of a toddler, planted amid a lush forest somewhere in Silicon Valley.

But “Devs” — written, directed and created by Alex Garland (“Ex Machina”) — also proved to be, at once, a philosophical debate on free will vs. determinism; a crash course in multiverse theory and quantum computing; and a meditation on the megalomania — and hubris — of tech titans.

And for star Mizuno, it was also a love story. In the series finale, Lily has a dramatic encounter with Forest in the devs cube which ends in a fatal elevator crash (a scene Mizuno recalled filming some 80 times).

Afterward, both she and Forest re-emerge in the Deus machine, where she chooses to be with Jamie (Jin Ha), her ex-boyfriend whom she left in the “real” world, or at least the one depicted in the majority of the show.

It’s also about the messiness of being in your 20s.

“I only speak for myself, but you make lots of mistakes in your 20s. You do a lot of stuff. You start to shed those things and your perspective about love and who you want to be with changes. I think on top of all the other stuff going on in the story, that’s what’s going on for Lily,” Mizuno told Variety on the “Variety After-Show.”

Ending up with Jamie, then, was a fitting coda to their romance.

“I felt it was the simple perfect ending for her journey,” she said.

Garland has indicated that there will not be a season 2 of the show, but Mizuno hinted that the cast may be reuniting in the future for an entirely different Garland project.

For Mizuno, who admitted she isn’t particularly tech-savvy, working on “Devs” both confirmed and challenged her beliefs about the pervasiveness of big tech.

“I remember reading the script, like, ‘I want to talk about these tech leaders who are controlling the way our society is run because our governments don’t have the structure to support how fast the industry is growing,’ and it felt like an amazing opportunity to do that,” she said.

But in doing research for the show, Mizuno visited a Google quantum computing lab in Santa Barbara, Calif., and X the Moonshoot Factory (formerly Google X), which shed some light on the net-positives of tech companies.

“[What] you’re doing is meeting these extremely intelligent, interesting, progressive people who are trying to do amazing things, some of them good things, positive things for humankind and the planet,” she said. “It kind of brings my own disquiet to the surface and challenged it.”

“Devs” marks Mizuno’s third time working with Garland. They first collaborated on 2014’s “Ex Machina” and then 2018’s “Annhilation.” In the former, Mizuno played an android who does a memorable disco dance scene with Oscar Isaac. A former ballet dancer, she said still knows the choreography and guesses that Isaac does, too.

And while she no longer dances professionally, she said her performance background influences her understanding of her characters’ physicalities — and how she carries herself on-screen, sometimes to her chagrin.

“Well, I definitely see it when I walk because I walk like a duck,” she noted, with a laugh. “I saw Lily do some duck-walking.”

Watch the full interview with Mizuno on the “Variety After-Show” above.