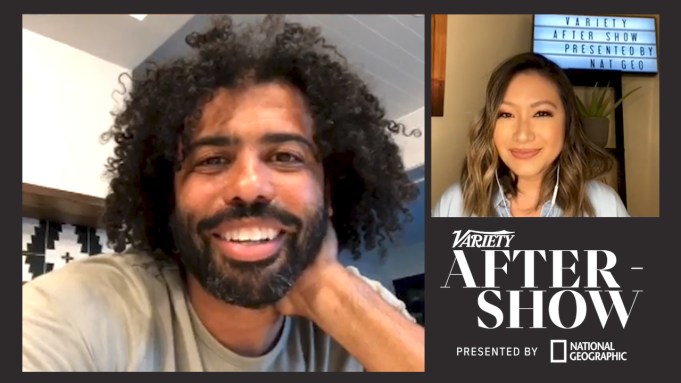 SPOILER ALERT: Do not read if you have not yet seen the premiere episode of TNT’s “Snowpiercer,” titled “First, the Weather Changed.”

Daveed Diggs hasn’t had a grilled cheese sandwich since filming the premiere episode of TNT’s “Snowpiercer.” And for good reason: he had to eat 10 of them, along with an equal number of bowls of tomato soup, for one pivotal scene.

“There was no place to cut in that scene, so there was no spitting out of sandwiches,” Diggs said on the “Variety After-Show.” “Ten full sandwiches and full bowls of soup. I haven’t had either since that day.”

Said scene depicts Andre Layton (Diggs) indulging in the delicious perks of being in a middle car of the Snowpiercer, a 1,001-car-long train carrying the last of humanity on an unending loop around the world after Earth becomes a frozen wasteland. The show is a spiritual successor to the 2013 film of the same name directed by Bong Joon Ho, who adapted it from French graphic novel “Le Transperceneige.”

The train itself is a not-so-subtle metaphor for class, where those at the back of the train (“the Tail,” whose inhabitants are called “Tailies”) consume little more than meager rations and suffer in squalor, while those at the very front can dine on freshly caught uni sushi.

Layton, a former Chicago homicide detective, is called up towards the latter to help solve a murder. There, he encounters the train’s Head of Hospitality Melanie Cavill (Jennifer Connelly) who, by episode’s end, is revealed (spoiler!) to also be the mysterious Mr. Wilford, the mastermind behind the Snowpiercer train.

Before being called up for his services, Layton is on the verge of leading a revolution against those up-train. It’s a reckoning of social injustice that Diggs says is worth examining especially now amid the COVID-19 pandemic.

“It is encouraging in examining whether or not our particular brand of capitalism and democracy is actually working. And that there is sort of something to be mined in the act of examining, and there are steps that potentially could be taken if it’s not working,” said Diggs, an Oakland, Calif. native.

Diggs is known for originating the roles of Marquis de Lafayette and Thomas Jefferson in Lin-Manuel Miranda’s “Hamilton,” which will hit streaming service Disney Plus on July 3, roughly a year before it was scheduled to debut in cinemas. The Tony-, Pulitzer- and Grammy award-winning musical was praised for exclusively starring actors of color, although Diggs said he did not initially fully grasp how impactful it would be.

“We were deep in it, to me, before I understood how much it meant to people and that’s been really wonderful,” he said. “There’s something fundamental about the story and the way of telling the story that, for a lot of people, [gives] them some sort of foundational level of courage or willingness to try something. And that’s cool. That doesn’t happen very often.”

The actor/rapper — who had to cancel tour dates with his experimental hip-hop group Clipping because of the pandemic — admits flexing the performance muscle has been challenging during quarantine. He’s been able to do so by participating in The 24-Hour Plays on Instagram and performing poems as part of a fundraiser for Marcus Books, the oldest black bookstore in the country, located in his hometown of Oakland.

He can next be seen/heard in the Apple TV Plus animated musical series “Central Park” about a family of caretakers of the iconic New York City park. Diggs plays Helen, an assistant to Bitsy, voiced by Stanley Tucci — quite the departure from the gritty Layton.

“I’m so happy to be part of it and talk s— with Stanley Tucci on the show,” said Diggs. “We’re both playing, like, octogenarians.”

Watch the full interview with Daveed Diggs on the “Variety After-Show” above.