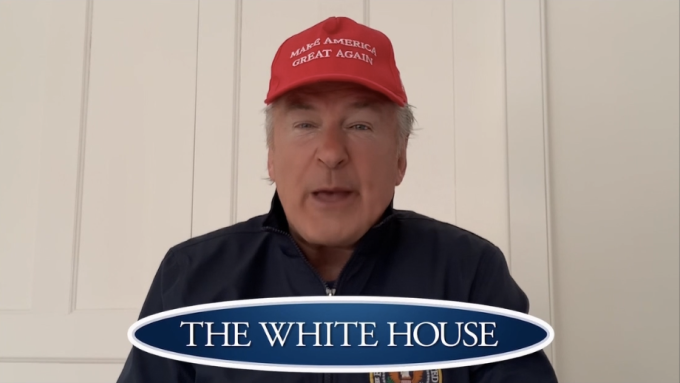 Actors, writers, musicians and even former president Barack Obama will be taking part in virtual graduation ceremonies as the Class of 2020 is still under stay-at-home orders due to the COVID-19 pandemic, and on “Saturday Night Live’s” “At Home” finale, the NBC late-night sketch series got in on the ceremonial event as well.

Alec Baldwin returned to play Donald Trump in the cold open about a fictional high school class’s virtual graduation. Kate McKinnon, who portrayed the principal, mentioned that he was the class’ eighth choice, behind such favorites as Obama, murder hornets and the “Elon Musk-Grimes baby.”

Citing that his valet got the virus, Baldwin’s Trump noted he had to do his own makeup, resorting to a “Liza Minnelli makeup tutorial” to do so but was still honored to be the “vale-dictator.”

Although he acknowledged that the day should be about the graduating seniors, he did, of course, want to talk about himself — and how “poorly” he feels he has been treated, which he compared to the treatment of Abraham Lincoln.

“I’m only telling you the truth. Lincoln would agree. He’s probably smiling up at me from hell right now,” he said.

When Chris Redd and Kenan Thompson’s characters tried to interrupt, Baldwin’s Trump muted the “jazz types” and went on to tell the class they are “lucky” to be graduating right now because “there are so many exciting new jobs out there, like grocery store bouncer, cam girl, porch pirate, amateur nurse and coal.”

Baldwin’s Trump also said he would make sure colleges would be open in the fall because “online colleges are a scam — and I should know, my online college was ranked No. 1 craziest scam by U.S. News every year it was open.”

Calls rang out from students who just wanted Dr. Anthony Fauci — who Baldwin’s Trump called an “elite medical type” — to speak instead. Baldwin’s Trump began coughing and then took a sip of Clorox, which he called “good old invincibility juice.”

But then he turned serious: “I know this is hard, so I’m going to give you some real advice. Believe in yourselves and you can achieve anything,” he said. “Look at me: I started as the son of a simple, wealthy slumlord and grew to become a billionaire, a president, and the world’s leading expert on infectious diseases. Surround yourself with the worst people you can find, that way you’ll always shine. If you don’t understand something, call it ‘stupid.’ Never wear sunscreen. And live every day like it’s your last because we’re going to let this virus run wild — this virus that, remember, was started in a lab, by Obama.”

Other celebrity guests in the “SNL At Home” finale included Kristen Wiig, Josh Gad, Danny Trejo, Tina Fey and Martin Short. Boyz II Men and Kenneth “Babyface” Edmonds were the musical guests in the episode, performing “A Song for Mama,” which was dedicated to all of the mothers, including those who were lost this year, and was cut together with a montage of photos of the “SNL” cast members with their mothers.