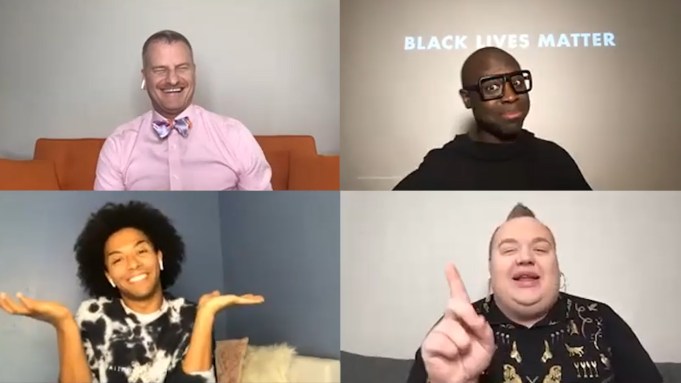 There’s not much that can scare drag queens Shangela, Bob the Drag Queen and Eureka O’Hara, even when the three were traveling to conservative parts of the country as the hosts of the HBO reality series “We’re Here.”

But things got a little dicey for Eureka when they were invited to ride in a pick-up truck at a monster truck rally. “I was like a little overwhelmed with the big, loud trucks. And I’m terrified of anything that I can’t control, so I was willing to be a part of it, but I was also hurting in these 10-inch pumps,” Eureka recalls. “Everyone knows I love a kitten heel so this episode I was like, ‘I’m going to wear this 12-inch platform.’ We had to walk through this dirt to get to the truck, and it was just loud. I come from a race town so when the race fans were in town, it was always known to be a nervous time because they would drink and party and not really be a fan of the gays, so I maybe resonated back to that.”

The three drag queens recently sat down for a virtual Q&A as part of the Variety Streaming Room series.

In ‘We’re Here,’ the trio visited cities like Gettysburg, Pa., and Branson, Mo. Once there, they gave drag makeovers to local residents before putting on a one-night drag show.

“Stepping into these spaces, we almost felt that we had a responsibility to not be fearful, to come in and put on a real strong armor of confidence because we had to connect with these people, our local residents, our drag daughters and sons,” Shangela said. “And we didn’t want them to see us being fearful.”

They also realize the power of reaching such a large cross-section of people, particularly in the wake of the killing of George Floyd and the fractured political landscape. “I have just been taking this opportunity to think how impactful, how important it is for us to get to be in the homes of people,” Bob said. “We get to be in the homes of Americans. Not just Americans, but citizens of the world. We get to be in their living rooms, we get to be on their cellphones, we get to be directly in their ears when they’re listening. And I have your ear for a moment so I’m like, ‘What am I going to say that can be impactful?’”

HBO recently announced that the series has been picked up for a second season.

Variety also asked each of the queens to name a celebrity they’d love to get in their drag makeover chair.

Shangela chose Beyoncé because “she is our everything,” as well as “How to Get Away With Murder” actor Rome Flynn. “His skin is just so beautiful. He has this beautiful bone structure,” Shangela gushed. “I could use my same makeup that I use on myself and snatch him back.”

Bob went with Whoopi Goldberg and Leslie Jones. He said of the “Saturday Night Live” star, “The movie where me and Leslie Jones play siblings will manifest at some point in time.”

Eureka boasted they “could put anybody in drag.” “I mean I hate putting other people in drag, personally,” they said. “I’m not the best at doing it because they always just look just like me. So I would want it to be someone that I could really show out with…I love people like John Goodman.”