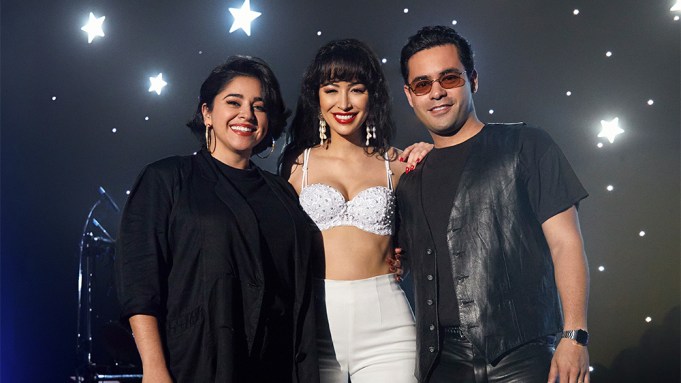 Getting to play Selena, one of the most popular Mexican American entertainers in modern times, was reason enough for Christian Serratos to take the titular role in Netflix’s new bio series “Selena.”

But more than that, Serratos wanted her 3-year-old daughter, Wolfgang, to see her portray the late singer.

“I grew up loving Selena so much,” she says during this week’s episode of the Variety and iHeart podcast “The Big Ticket.” “She has crossed so many generations, and new generations are going to fall in love with her. I know my daughter is going to be no different. So for my daughter to see that I played an iconic Mexican woman like her I think is really powerful.”

Serratos, who stars on “The Walking Dead,” got her start as a child actor on Nickelodeon’s “Ned’s Declassified School Survival Guide” in the mid-aughts, followed by playing Angela in the “Twilight” franchise.

Now 30, Serratos has inevitably set herself up for comparisons to Jennifer Lopez, whose climb to Jenny From the Block began with her star-making turn in Gregory Nava’s 1997 “Selena” biopic.

“Sometimes I do have to remind myself that I can’t please everybody because I’m human,” Serratos says. “But the thing I tried to do first and foremost was to honestly portray her spirit because I think that’s what made her so lovely and so iconic. I think that’s why we all love her so much because there are icons and people we love, but there’s something so personal about Selena.”

Take me back to when you got the call that you were up for playing Selena.

It was one of those things that seemed too good to be true. I didn’t know if the show was ever going to come to fruition so I kind of disregarded it because I didn’t want to get too excited. But then it became more and more real. They wanted me to send in some scenes and some songs. I feel like I was auditioning for six months. It was exciting, but I was relentless about it. A lot of my peers and my husband were trying to tell me to chill because I was kind of killing myself to accomplish this, to play this woman.

Why were you so determined?

I really looked up to and admired this woman my entire life. She’s one of the few Mexican women to become an icon. I wanted the opportunity to follow in her footsteps. She has been such a pioneer for women like me. She opened so many doors for me. It felt it was almost like a way of thanking her.

What was it like seeing yourself for the first time as Selena?

I was wearing this white bustier and white pants for the “Como la Flor” performance in one of the first episodes. I remember seeing Christina, who’s one of our seamstresses, and she was so proud of the work that she had done, but to see me in it, it really affected her and she started to cry. I was like, “Oh, wow, OK.” Then I performed “Como la Flor” and it was the last shot and there was silence. But then the entire audience started crying in the dark. It’s then that I went, “I’m in it.”

Like Jennifer Lopez, you don’t do your own singing on the show. Why not?

I recorded quite a few songs, and I think it was always supposed to be the actress singing but … I always wanted it to be Selena because I was such a fan. I think people were confused by that because I never wanted to be a pop star, but I always wanted to act in films where I got the opportunity to just sing. They were like, “Here’s your chance to show people you can sing.” I was like, “But it’s not about me; it’s never been about me.” I just want the fans to see their girl. I want them to see their girl. I don’t want to hear me. I want to hear Selena.

How has the business changed for you as a Latina from when you started out to now?

I feel a bit of redemption. For a long time, I really wanted bigger and bigger and more opportunities and to play the lead. So often I was told, “You can’t play the lead. It’s not for somebody who is diverse.” So I was consistently bored. I was bored with playing the friend, and I wanted to tell deeper stories. But I think things are getting better. I love that people are now creating their own stories because that’s what it does. It causes people to create their own universes and I’m glad for it.