Continue to Variety SKIP AD
You will be redirected back to your article in seconds
May 28, 2020 10:00am PT 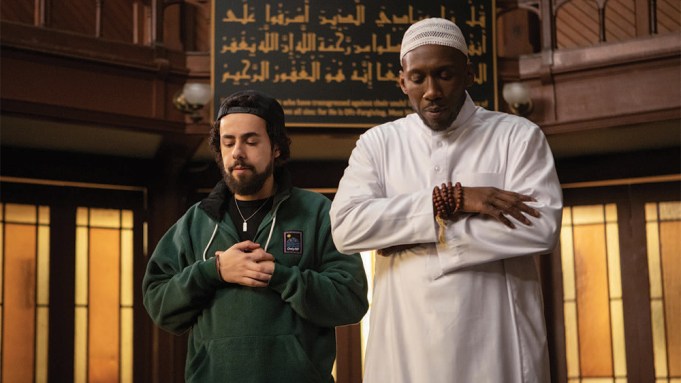 In Episode 2 of the new season of Hulu series “Ramy,” protesters gather outside Ramy’s mosque brandishing angry placards and chanting, “No sharia in New Jersey.”

Unsure how to handle the situation, Ramy, played by show creator and writer Ramy Youssef, turns to his new spiritual counselor, Sheikh Ali, portrayed by Mahershala Ali, for guidance.

“Right now they’re just so consumed by their fear, I know it may seem odd to pray for these people, but trying to help those who can’t help themselves is sometimes the only path for our own heart,” Sheikh Ali tells him. “Help others, and God will help you with your struggles.”

Later in the episode, Ramy befriends a young Iraq war veteran (Jared Abrahamson) and agrees to help him convert to Islam. But during his first prayer session, the veteran is hit by a violent wave of PTSD and assaults one of the protesters.

Following his stunning Golden Globe win earlier this year, which Youssef says now “feels like years ago,” one might expect the comedian to play it safe with his show’s sophomore season, but that’s not his M.O.

There were undertones of politics and Islamophobia in Season 1 (most prominently in the moving 9/11 flashback episode “Strawberries”), but nothing quite as overt as racist chants or bloodied faces.

“We wanted to look at something that is obviously real in this country. I didn’t want to make those characters like cartoonish bigots or anything like that. I just kind of wanted to paint the picture of what a lot of people have experienced shades of in America,” Youssef says. “I’m never afraid to get political or anything. It’s not like I didn’t want to include that stuff in Season 1, but it has to fit the story in an organic way.”

As the sheikh explains to Ramy, forgiving the racists with their hate-scrawled signs might help him forgive himself for his mistakes — and he’s made a few.

In the first season, Ramy sleeps with a married woman during Ramadan, masturbates an unhealthy amount and even has sex with his cousin the day after their grandfather dies. Ramy lists his many sins to the sheikh in the first episode of Season 2, swearing a Bay’ah to let him into his life as his spiritual guide, to lead him on the path toward being a better, perhaps less selfish Muslim.

“Ramy talks about wanting to be a good person and a believing person, and so much of what we wanted to do in Season 2 was put him in a pressure cooker, put him in a situation where we actually get to see what he’s about, not just talking about these things in the abstract,” Youssef says.

Ali’s addition to the series was unexpected, Youssef says, and came about after a two-hour phone call between the two to “just hang out.” At the end of the conversation, Ali casually dropped the line, “If you want me to be in Season 2, just let me know — any part, big or small, whatever you need, I’m there.”

“We had been writing for a month at that point, and I went back to the writers’ room and was like, ‘Mahershala Ali wants to be in the show — we have to figure something out,’” Youssef recalls.

Rather than trying to fit Ali into an existing storyline, Youssef and the writers decided to throw out almost everything they had, “blowing up the whole season” in order to have Ali play Ramy’s sheikh, the vital moral compass at the heart of the new set of episodes.

However, fans of the first season will be pleased to know there are still installments focusing on individual members of Ramy’s family. In Episode 6, “They,” Ramy’s mother, Maysa (the electrifying Hiam Abbass), takes her American citizenship test. Prior to the test, she’s accused of having Trump-like views by her daughter Dena (May Calamawy) for mis-gendering a transgender person. Stung, Maysa closes the citizenship ceremony with a candid, expletive-laden tirade directed at the president.

But as Youssef is quick to point out, Trump is not the butt of the joke here, and politics is never the point of the show. Maysa is trying to reconcile her family and religious values with “typical American ones,” and finds that given the current political climate, the two clearly don’t add up.

It’s telling also that the only character who lashes out against the racism and hatred directed toward Muslims is a white veteran. That creative decision, Ali says, allows the season to take on “a deeper meaning, a larger message.”

Adds Youssef: “If this show is going to explore the idea of extremism, I’m only comfortable doing it with a white character. I don’t really want to do the story of ‘Muslim goes nuts,’ because I feel like that’s always been the dialogue. Hopefully we can keep shifting that dialogue with future seasons.”