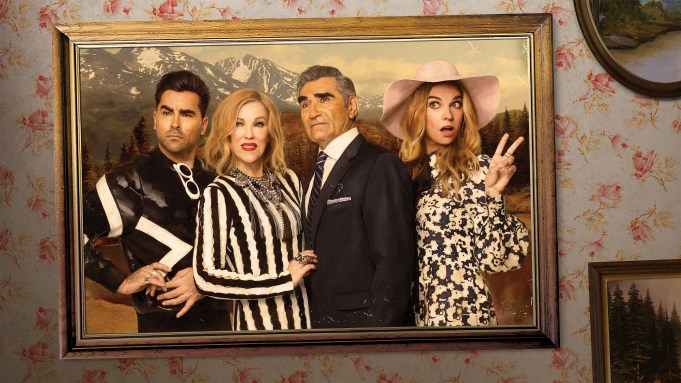 For Netflix subscribers, this “Schitt” don’t stink. A week after “Schitt’s Creek” dominated the Emmy Awards, taking home the outstanding comedy prize and eight other awards, more viewers flocked to check the Canadian comedy out, according to Nielsen data.

That’s likely due to the surprise drop of “Schitt’s Creek’s” sixth and final season on Oct. 3. Originally slated for Oct. 7, the upload came early and caused a frenzy among fans. Viewers’ Season 6 binge will likely spill into the next chart as well.

Viewers watched “Schitt’s Creek” for a total of 968 million total minutes between Sept. 28 and Oct. 4, placing it tops.

The week’s top four streamed programs were all Netflix acquisitions: Besides “Schitt’s Creek” (from Pop TV and CBC), “The Office” (NBC) was No. 2, followed by “The Blacklist” (NBC) at No. 3 and “Grey’s Anatomy” (ABC) at No. 4.

After two weeks in the top spot, Netflix’s “Ratched” slid to No. 5, still making it the most-viewed streaming original for the week. New to the chart, and in the No. 6 slot, was Netflix’s new true crime documentary “American Murder: The Family Next Door,” which dropped on Sept. 30.

Amazon’s “The Boys” remains the only non-Netflix program on the chart, coming in at No. 7.