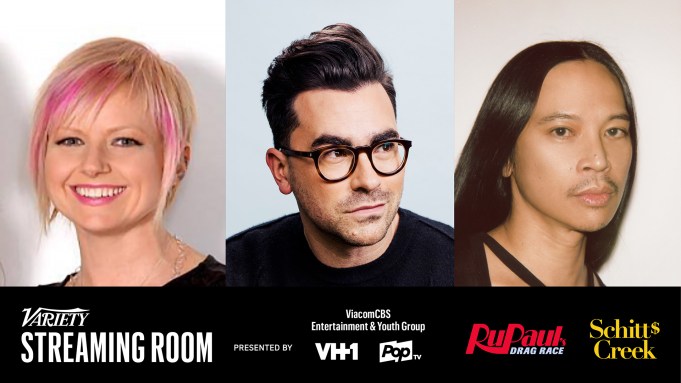 Drag fans have latched onto “Schitt’s Creek” character Moira Rose (Catherine O’Hara), whose outfits, hair and makeup are often akin to the styles donned by drag queens around the country.

The show rose to popularity in recent years, and the central family became iconic for both their personalities and their wardrobe choices, much like the “RuPaul’s Drag Race” star, RuPaul. Emmy winning costume designer, Zaldy, joined “Schitt’s Creek” star Dan Levy (who also serves as the show’s producer) and assistant costume designer Darci Cheyne in the Variety Streaming Room, moderated by Variety‘s Jazz Tangcay.

Throughout the conversation, the designers discussed how looks are influenced by the person wearing them, the storytelling power of clothing and the inspiration behind wardrobe evolutions in both shows.

“Oftentimes I feel like costume design is really not prioritized, or it’s not utilized in the way that it could be, because the way we conduct ourselves, the way we get dressed every day, even if it’s a simple thing it’s saying a lot,” Levy said. “I didn’t want just a strand of pearls around a wealthy woman’s neck in order to indicate that she was wealthy. I wanted to really live in a truthful place.”

Many shows tell the story of going from rags to riches, but “Schitt’s Creek” tells the opposite, a riches to rags story. Levy said that their extravagant clothing represents what once was, while also having an added bonus of explaining their intricate dynamic without words.

“The clothes that our characters wear are really the only reminder of where they came from,” he said. “The designer clothes that they’re wearing are so representative of a life that they used to have. And it also from a storytelling standpoint means that I don’t have to constantly script people saying, ‘remember when we had money?'”

In the reality television realm, however, sometimes clothing choices are catered to the whims and fancies of the stars. RuPaul, for example, has shifted styles steadily over the 12 seasons of “Drag Race.”

Zaldy said that when Ru likes an idea, she’ll often joke about requesting it in five different colors. And though many of her looks vary, they tend to follow different trends over time, with the designers working based on her interests. Currently, Zaldy said he’s been pushing for looks that show off more of her body since the 2019 Vanity Fair cover.

“It wasn’t until about season eight until we saw RuPaul’s legs, because those eight years Ru was just not in the mood to show Ru’s legs,” Zaldy said. “She pulled out a dress that I made for her VH1 talk show in the nineties and wore the shortest dress I’ve ever made in my life. So now it’s like a monumental shift in our design process with just that one little thing or big thing.”

Even the fictional characters’ costumes are subject to change or grow alongside the actors, Levy said. The inspiration for Moira’s whole style came from O’Hara early in the developmental stages, and she picks one of the numerous different wigs owned by her character right before shooting. Levy said she bases the choice on how the character is supposed to be feeling, while her outfits reflect the status she wants to be perceived as holding.

“I think the incredible gift that is Catherine O’Hara is that she doesn’t just come as an actor. She comes as kind of a creative force, herself,” he said. “In that first conversation, she basically came with a phone full of images of Daphne Guinness … and I immediately was excited by the prospect of having that be the jumping-off point.”

Hair and makeup is separate from the work that either Zaldy or Cheyne do for their respective shows, but both said it’s rewarding to see the finished combination of everyone’s hard work. Zaldy said he sends swatches or brief glimpses for RuPaul’s outfits to the hair and makeup department, so they can match or complement colors as they see fit.

Cheyne’s process is different, however, at least for Moira’s character. Many of the family’s signature styles are black and white, or muted gold colors, but O’Hara has been known to select pastel green or pink wigs without warning. But regardless, the outcome is always perfect for bringing the character to life.

“I honestly didn’t see most of the wigs until on the day,” Cheyne said. “And it’s like seeing the icing on a cake when the hair and makeup was done on top of our costume. Just mind-blowing.”

Zaldy is continuing to work with RuPaul moving forward, but “Schitt’s Creek” recently bowed out with its series finale after six seasons. The show ended on a high note, as a special occasion called for each of the characters to dress to the nines. Levy said the finale was specifically intended to demonstrate the skills of costuming and the show’s behind-the-scenes crew.

“I think we wrote (the finale) as a love letter to our crew because it has the highest production value,” he said. “It required the most work in terms of hair and makeup and costume. It was beautifully production designed. So in the end, I think what was so beautiful about that episode across the board was that it was showing the best of what our team could do.”