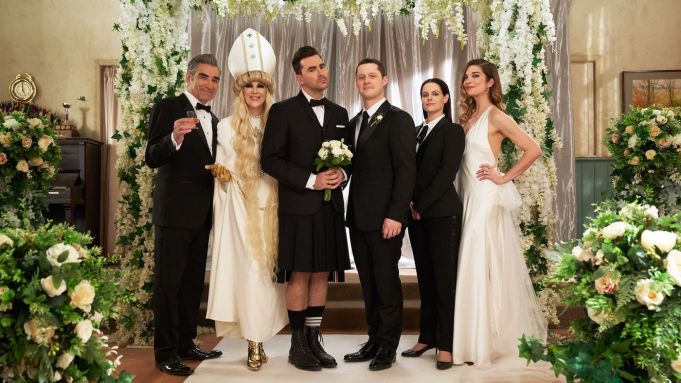 “Schitt’s Creek” bade a teary, emotional farewell, and more than a million people tuned in to watch.

The series finale, which aired simultaneously across Pop TV, Comedy Central and Logo, drew 1.3 million total viewers, which represents the show’s highest-rated episode ever. 501,000 viewers tuned in on Pop, narrowly beating the penultimate episode’s audience tally of 499,000. For reference, this season was averaging 370,000 total viewers on the network in Live+Same Day going into the finale.

According to Pop, the sixth and final season was up 103% overall on season 5, with the finale up 36% versus the current season overall. Tuesday’s finale, which was capped off by David’s (Daniel Levy) wedding, was up 173% in the 25-54 demo on last season’s finale among, and had a 25% more total viewers than the previous series high.

The finale was followed by a farewell documentary special titled “Best Wishes, Warmest Regards: A Schitt’s Creek Farewell,” which aired only on Pop and was the highest-rated telecast in the network’s history in its target demo of adults 25-54.

Since its beginnings on the Canadian network CBC, “Schitt’s Creek” has grown its viewership exponentially, thanks in no small part to the much-documented Netflix effect.

Pop’s 2017 deal with the streamer brought a substantially larger, wider audience to the series, an effect which star and executive producer Eugene Levy called “enormous and immediate” in Variety‘s recent cover story on the show.

“You could feel it wherever you went — on the street, at an airport, in a restaurant, more people were coming up saying, ‘Love the show,” Levy said.