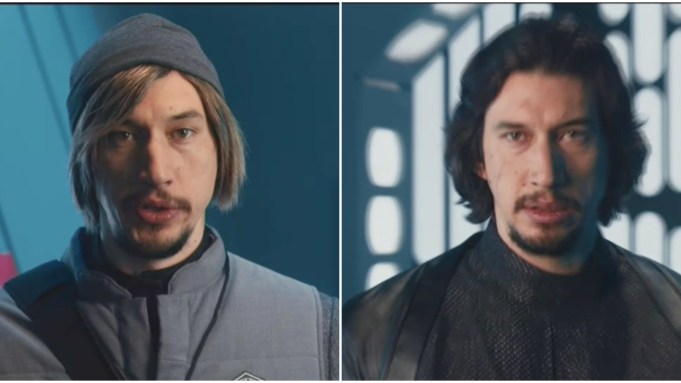 When Adam Driver hosted “Saturday Night Live” in 2016 he went viral for a “Star Wars”/”Undercover Boss” mashup sketch that saw his Kylo Ren put on a disguise in order to observe his employees ala the CBS reality show. Four years later, he has done it again.

While hosting the Jan. 26 episode of “SNL,” Driver took part in a special “Where are they now?” edition of the show, being made up into “Randy,” “an entry-level intern.”

“I’ll say it: I haven’t been the best boss lately,” Driver, in his Kylo Ren costume, said. “I’ve been a little distracted by some personal drama.”

That drama? “Days after appearing on our show, Kylo killed his dad, cut his mentor in half, fired upon his mother’s spacecraft and is now obsessed with finding a young Jedi named Rey,” the voiceover reminded.

When he first stepped foot on the Star Destroyer H17, he began by saying — apropos of nothing — “OK boomer” as a way to fit in. But he then immediately showed his hand by asking if they thought Rey would take Kylo Ren’s hand if he offered it for a second time.

He had trouble getting drink orders correct, wrangling droids and getting straight answers out of Stormtroopers. But he learned the valuable lesson that interns do the work no one else wants to. And the employees quickly learned “Randy” was Kylo Ren — when he exploded an admiral’s head with just a look. (That admiral was played by Beck Bennett.)

Sensing who he really was, he was invited to a party with the rest of the interns, where one, played by Chloe Fineman, used the opportunity to try to get promoted. “I applied to be a fighter pilot, but the director was like, ‘The only way for a woman to be fly cockpit is a direct order from Kylo Ren.”

It worked — Driver’s Kylo Ren gave an interview saying, “The culture here needs to change. Everybody deserves a shot. If I can be a small part of that change, I will.”

But when he gives the woman her shot, she says she wants to fly like Luke Skywalker, not Kylo Ren — so he kills her. “And now you’ll die like him, too. OK boomer?”

“I made four new friends and only killed one of them. I’d say that’s a pretty good start,” he closed out the sketch.