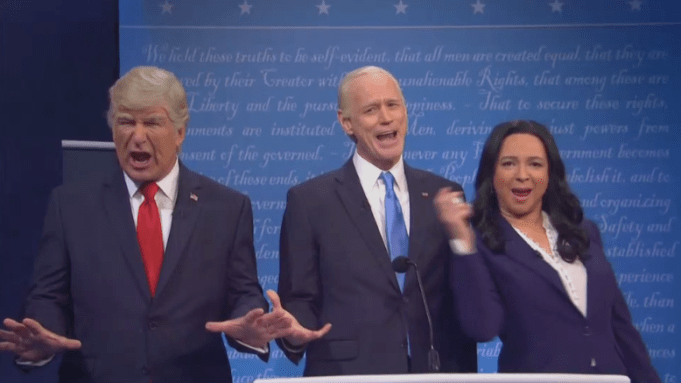 With the second presidential debate leading the “Saturday Night Live’s” Oct 24 show, that meant both Alec Baldwin and Jim Carrey were once again in the spotlight. But, in a fun twist, so were Maya Rudolph and Kate McKinnon. The former cast member now known for her portrayal of Sen. Kamala Harris took on the role of debate moderator, journalist Kristen Welker, while current cast member McKinnon reprised her role as Rudy Giuliani.

Rudolph’s Welker kicked things off by announcing that this debate would have a mute button because “it was either that or tranquilizer darts,” but President Donald Trump has a “high tolerance” of the latter “after his COVID treatments.”

“It’s not connected to anything, but I’ll push it,” Rudolph’s Welker threatened as Carrey’s Biden got riled up and began to walk out from behind his podium.

Baldwin’s Trump started the debate a bit nicer (although he called Rudolph’s Welker “Hoda,” as in “Today’s” Hoda Kotb. “You’re taking really good care of us, and now could you just tell us about the specials please?” he said.

When responding to a question about his COVID-19 plan, Baldwin’s Trump called it “so boring, right?” and claimed, “We’re rounding the corner. In fact we’ve rounded so many corners we’ve gone all the way around the block and we’re back where we started in March.”

Carrey’s Biden called it the “third wave,” but Baldwin’s Trump pointed out, using hand gestures, that a wave moves up and down, while COVID is just moving up. He acknowledged — but downplayed — spikes in Florida, Arizona and North Dakota, “but who cares? A lot of people don’t know this, but we’ve got another Dakota somewhere.”

“In just couple of weeks, if you vote for me, the vaccine will be here and will be distributed by the military,” he continued. “The Army will come and shoot it with a cannon into your face. I had it, it was very mean to me but I beat it and now the doctors say I can never die. And the virus said, ‘Sir, sir, I have to leave your body.’ And the virus was crying. Very sad.”

Baldwin’s Trump also said “we’re all learning to live with” COVID, to which Carrey’s Biden got an Old West standoff look in his eye after saying, “We’re all learning to die with it, man.” He also called Baldwin’s Trump out on not having a plan for COVID, saying, “You don’t even have a plan for me. First I’m creepy, then I’m sleepy. You say I have dementia, then you say I’m a criminal mastermind.”

“I can’t show you my plan, it’s under audit just like my taxes,” Baldwin’s Trump responded. But he guaranteed the vaccine was coming “somewhere between two and 700 weeks.”

“We’re making so many ventilators,” he continued. “And I don’t want to get anybody excited, but if elected I promise everyone in America will be on a big, beautiful ventilator.”

That allowed Carrey’s Biden to announce his “Biden Care” health plan, coming if Obamacare were to be suspended. “It may not talk as smooth, it may need a little bit more sunscreen than the previous melanin-rich plan, but damn it, it’s got heart and it works.”

Baldwin’s Trump brought in his lawyer, McKinnon’s Giuliani, to back him up about his plan. In a spin on the former New York mayor’s appearance in “Borat 2,” McKinnon’s Giuliani claimed to be adjusting his microphone before spinning around to face the camera to drop a “truth bomb” about Hunter Biden.

The debate sketch also asked each candidate to devote a minute to climate change.

“Oil, no; wind, yes; fracking, depends on what state I’m in,” said Carrey’s Biden. This allowed Baldwin’s Trump to deliver the now-infamous “I know more about wind than anyone line,” adding, “It makes golf shots go real bad” and “sometimes it goes into a twister and throws a cow right on top of Helen Hunt.”

In closing, each candidate also had a chance to speak directly to Americans who did NOT vote for them on a hypothetical upcoming election day.

“Hola,” was Baldwin’s Trump’s first reaction. But then he added, “Just remember how good things used to be back before the China plague. We had the lowest unemployment numbers in all categories: Blacks, Asians, Latinxes, brunettes, MILFs, LGBTQAnon. In conclusion, New York is a ghost town, kids love cages and Joe Biden is from Kenya, thank you.”

Carrey’s Biden said, “Look everybody, you know who he is, and you know who I am. I’m good old Joe. I’m reliable as a rock. … I don’t have a golden toilet seat, I have the soft, spongey one that hisses whenever I park my keister. There’s only two things I do: I kick ass and I take trains — and I don’t see any trains in sight.”

Later in the episode on “Weekend Update,” Colin Jost and Michael Che weighed in on the debate by talking about “yelling lines” he wished Biden had said instead at the TV. None of these lines made it into the opening debate sketch, however.

“When Trump said that Biden is all talk and no action, why didn’t Biden just say, ‘Bitch, show us your taxes, show us the vaccine, show us the wall and show us what prison you locked Hillary in,” he said.

“SNL” also delivered a voting PSA during which cast members asked the audience if they wanted to vote for someone who divided the country or united it. But they admitted they were worried because, “If Donald Trump isn’t president, then what are we going to talk about?”

While that piece came with humorous lines such as, “My entire personality is hating Donald Trump. If he’s gone, what am I supposed to do — focus on my kids again?” and worrying about Rachel Maddow’s content for her show, it likely hit close to home to those who work on “SNL” because that show spends so much time talking about Trump as well.

What that sketch concluded was that if Trump loses on Nov. 3, he will likely “get more vocal,” “angrier” and “crazier.” Hopes were also high that he might be put on trial — even defending himself — or that he and his daughter Ivanka Trump would run on a presidential ticket together in 2024.