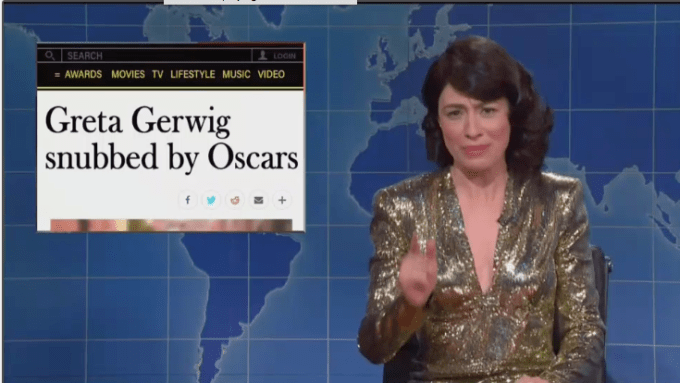 With the 92nd Annual Academy Awards just around the corner, “Saturday Night Live” devoted a segment in its Jan. 26 “Weekend Update” to cast member Melissa Villaseñor’s thoughts about a number of the nominees — and one notable snub.

Clad in an Oscar gold dress, Villaseñor sat next to Colin Jost at the anchor desk, saying she thinks she has a good chance to win a statue this year because she wrote original songs for all of the top movies.” To prove it, she started with a ditty about “Joker.”

Although she said she had “a whole bunch” of these, she decided to combine them all for a medley.

“Manson, Hitler, white male rage,” she sang while the posters for “Once Upon a Time in Hollywood” and “Jojo Rabbit” were keyed in as graphics to her right.