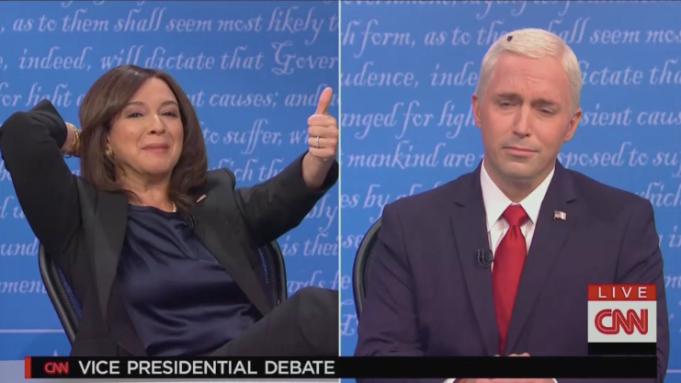 On Wednesday night a star was born. When a fly landed on Vice President Mike Pence’s head during the debate against Sen. Kamala Harris, it was a moment that took over Twitter for the rest of the week. Naturally, the fly had prime screen time during “Saturday Night Live’s” Oct. 10 cold open sketch about the debate — but rather than cast someone new in the role, the late-night sketch comedy show hypothesized that it was Joe Biden (Jim Carrey) who teleported to the debate in order to “save the soul of this nation.”

The sketch began simply, with Kate McKinnon portraying debate moderator Susan Page and saying they would be debating a “who cares number of topics,” Beck Bennett portraying Pence, and Emmy winner Maya Rudolph as Kamala Harris, entering by double-fisting cans of Lysol. (The “SNL” set did include the plexiglass barriers between candidates, or as McKinnon’s Page put it, “buffet-style sneeze guards on account of, one of you works for patient zero.”) The first question was for Bennett’s Pence, who stalled when asked about the pandemic and then yielded the remainder of his time — only to interrupt Rudolph’s Harris half a sentence in, to allow her to deliver the other debate moment that took over social media this past week: “I’m speaking.”

She noted that she wanted to hear the vice president’s response, so while he spoke, she only planned to “smile at him like I’m in a TJ Maxx and a white lady asks me if I work here.”

She did, but then she switched to “more of a Clair Huxtable side-eye” and eventually fixed her face in a way “every Black woman knows exactly what I’m thinking — and a few of the white women and all of the gays” as he said things like, “President Trump puts the health of all Americans way ahead of his own personal and financial gain” and “enough about COVID, let’s talk about the two things Americans do care about: swine flu and fracking.”

Rudolph’s Harris clarified his latter claim by saying that if “Dr. Fauci says the vaccine is good, I will be the first in line like it’s an Ann Taylor sample sale. But if Trump says it’s safe? I will throw that vaccine in the trash like last week’s shrimp pad thai.”

As Bennett’s Pence kept coming back to swine flu (“two million dead if you include the swine!”), Carrey’s Biden decided to hop into the not-yet-fully functional teleportation device. Of course, since there were still some kinks to work out, he ended up mixed with a fly that had also gotten into the machine and landed on Bennett as Pence’s head, doing tiny finger guns at first and eventually a version of Jeff Goldblum (who famously starred in “The Fly”).