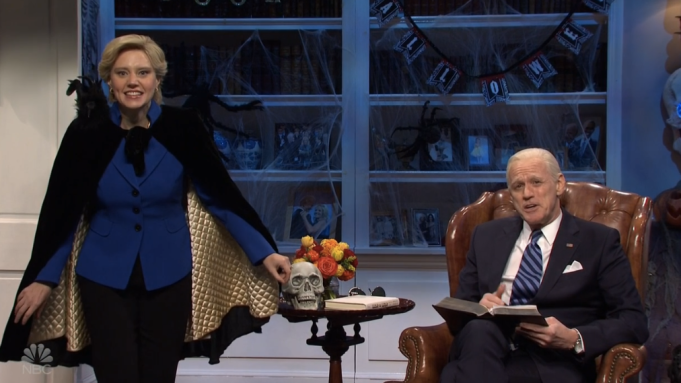 “Saturday Night Live’s” Oct. 31 episode not only served as the Halloween show, but also as the last show before the 2020 presidential election. So Kate McKinnon reprised her role as Hillary Clinton to warn Jim Carrey’s Joe Biden not to count his chickens before they hatched when it came to expecting a win.

“Even if you do win on Tuesday the election could still be stolen for you,” she said in the sketch, which you can watch above..

“I said come on, no one would dare; I’d be sworn in fair and square. All the votes will be accounted for,” Carrey’s Biden replied.

But Carrey’s Biden was undeterred saying the this time it is different because the people know he has a plan — to which McKinnon’s Clinton point out the real advantage is that he is a man.

The sketch took on a rhyme scheme in order to play on an Edgar Allan Poe poem, as Carrey’s Biden used the classic structure to parody modern politics.

Mikey Day took on the role of FiveThirtyEight’s founder Nate Silver to deliver the odds of Donald Trump winning the election, which he compared to the same odds as coming up with the number “one” when you roll a die. Of course, he rolled as an example and got the “one.”

“I guess that shows you that it’s technically possible, however, unlikely,” he said.

He tried again and got another “one” and then a third time and got “electoral tie,” which isn’t really an option. That prompted him to leave because he thought the country was haunted.

Carrey’s Biden refuted that opinion saying, “We just have to come together, like two butt cheeks to stop the crap.”

Later in the sketch Kenan Thompson and Chris Redd portrayed Ice Cube and Lil Wayne, respectively, so Carrey’s Biden could ask why they would be voting for Trump. In unison they replied, “Taxes.”

“Oh, this is just a very common condition called ‘old man purple,'” he said about his hands. “Basically my blood hates me so much, it’s trying to get away from my body. Either that, or I’m too far away from my horcrux.”

Ending the sketch, Carrey and Rudolph appeared together to address the nation. Carrey started, saying, “Whatever happens, we’ll be OK,” with Rudolph following on that sentiment to add, “Our nation will endure. We will fight another day.”

“I’m sure it will be peaceful, no matter who has won,” Carrey’s Biden said.

“Though it’s never a good sign when Walmart stops selling guns,” Rudolph’s Harris replied. “Use your voice and use your vote. Democracy will represent.”

Host John Mulaney devoted some time to the election during his almost 10-minute monologue, first saying, “I’m supposed to make an announcement. On Nov. 3 there is an elderly man contest. So there’s two elderly men and you’re supposed to choose your favorite of the two elderly men.”

It seemed like he was downplaying the situation at times, noting that you can vote by mail or go in person, despite the United States Post Office saying they need two weeks to deliver mail-in ballots and therefore encouraging mailing in a ballot now means that ballot likely won’t be counted. Additionally he said “rest assured, no matter what happens, nothing much will changes in the United States. The rich will continue to prosper, the poor languish, families will be upended by mental illness and drug addiction, Jane Lynch will continue to book lots of projects and when she does she’ll deliver.”

A little later in the monologue he turned his attention to his 94-year-old grandmother who will be voting, at first seemingly to say that if she can do it, so can and should everyone else. The twist was that he thought she should NOT do it.

“You don’t get to order for the table when you’re about to leave the restaurant,” he said. He acknowledged that the joke is ageist and no one age group is better than another. “That would be like calling yourselves ‘the greatest generation.’ ‘Oh we fought the Nazis!’ Well, we’re trying to fight the new Nazis if you’d get out of the way.”

Later in the episode, Mulaney joined cast members Kenan Thompson, Chris Redd, Ego Nwodim and Punkie Johnson in a musical sketch about voter suppression, which saw Mulaney’s character constantly keeping the four from voting, due to closed polling places and roads. They do eventually make it in line to vote but face a multi-hour wait and potentially being turned away for not having facial coverings.

And in the final “Weekend Update” before the election, Colin Jost flat-out said, “We cannot do another four years of Trump [as the president]. It is too much. Every day I wake up and Google, ‘America still democracy?’

“Even if you like Trump, at this point you have to be exhausted,” he continued. “Remember that friend you had who at 4 a.m. would be like, ‘Yeah where are we going next?’ And you’re like, ‘This is fun, but if I keep hanging out with this dude I’m going to die.’ Right now it feels like Trump wants us all to do another bump of whatever he got from his Muppet doctor and just see wherever the night takes us. I don’t know about you, but I think this time I’m calling a designated driver.”