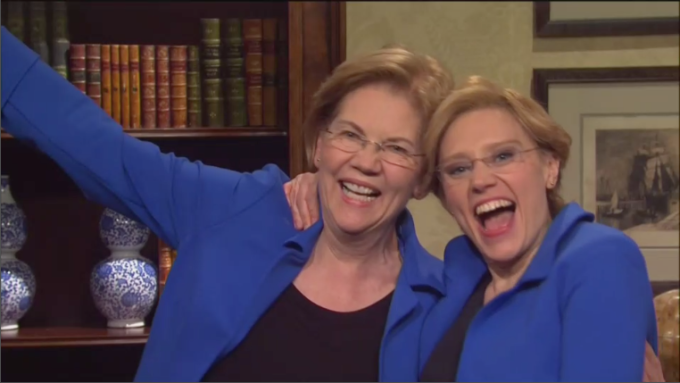 A lot can happen in a short week’s time. On Saturday, February 29, “Saturday Night Live” opened its episode with a press conference about COVID-19 that turned into an impromptu democratic presidential hopefuls press conference because the primaries were the bigger story. But just seven short days later, most of those candidates had dropped out of the race, leaving Bernie Sanders and Joe Biden last men standing, and COVID-19 became a top news story for the events that canceled due to concerns (everything from SXSW in the U.S. to Mip TV in France) and the states of emergencies declared in places including New York. So the March 5 episode of NBC’s late-night sketch comedy show put its spotlight on the virus — but threw in a surprise political cameo for good measure.

Elizabeth Warren appeared in the sketch as herself, visiting Kate McKinnon’s Laura Ingraham via satellite. McKinnon’s Ingraham told her she “certainly ran a memorable campaign” and then ran footage that she said was Warren debating Mike Bloomberg, but was just the viral clip of Warren’s Golden Retriever Bailey stealing someone’s burrito.

When asked if she was endorsing anyone, Warren said, “It’s tough. Maybe I’ll just pull a New York Times and endorse them both.”

But more seriously, she added that she was proud of her campaign because “we built a wide coalition of teachers, preschool teachers, middle school teachers and teachers’ pets. And not only did I not accept money from billionaires, I got to give one a swirly on live TV.

“But now, I’ve got time to do a little self-care,” she continued. “Hanging out with my dog Bailey, prank-calling banks, drag-racing Subarus, avoiding Twitter.”

McKinnon did a quick change into a matching outfit and slid into the shot with Warren to “thank you for all that you’ve done in your lifetime.”

The majority of the sketch had its attention on COVID-19, or more broadly, coronavirus, though.

“The left continues to wage its deceitful, dishonest and, frankly, gay smear campaign against President Trump,” she said before showing a clip of what she said was “loco libs driving to Whole Foods to buy he last bottle of organic Purell” but was actually a clip of Vin Diesel in the “Fast and the Furious” franchise.

“The left is trying to whip people into a fear frenzy of lies,” she continued, “which just isn’t right — that’s our thing.”

She went on to say that the virus is an urban legend — “and yes, I said urban as a dog whistle. The point is, you’ve got much bigger things to worry about.” This list, which she then read off, included “women who keep their maiden names, Montessori schools, Mexican teenagers rehearing a dance for a quinceañera in a public park” and “black marching bands — they’re too good.”

Cecily Strong joined McKinnon in the sketch, resuming her role of Judge Jeanine Pirro who said, “Americans are not at risk” of the virus — “especially not our viewers, who skew elderly, are in bad health, live cloistered together in homes specifically for sick people and have smoked their entire lives.” Claiming she wasn’t worried, she said, “If you see me avoiding Chinese restaurants, it’s not ’cause I’m scared, it’s ’cause I don’t trust the Chinese. A fortune cookie once told me to lower my voice and I’ve never looked back.” Also, she noted, “alcohol is a disinfectant, so mama’s going to live forever.”

“Our father has everything under control,” said Day’s Tump as Moffat’s Trump just mimicked his body language and hand gestures off to the side. “Democrats would love for people to get sick so they could use it to their advantage — like how we give Eric raw chicken so he misses important meetings.”

Darrell Hammond appeared as Chris Matthews, who recently exited MSNBC amid inappropriate comments about women and Sanders. “The race is down to Hitler and an ice cream cone to see who can beat the Michelin man,” he said in response.

Later in the episode, “SNL” worked COVID-19 into its sketches by tweaking actions in the soap opera “The Sands of Modesto” for actor safety. This included McKinnon disinfecting a phone and her own face at the start of the sketch, closing doors with her elbows, saying goodbye to her daughter (Chloe Fineman) by doing a jig where they touched feet and kissing Daniel Craig through a plastic shield.

Rachel Dratch resurrected Debbie Downer for a wedding sketch. She started in a full face mask — “Unfortunately, with COVID-19 you can display no symptoms and still be wildly contagious,” she told her table mates. “They say to forego masks, but good luck nabbing one when we’re facing a worldwide pandemic.”

And Strong brought back her “Girl You Wish You Hadn’t Started a Conversation With at a Party” to also comment on the virus, which culminated in her agreeing to wear a mask because she was showing symptoms — and then pulled out a Momo mask on a stick with which to cover her face.