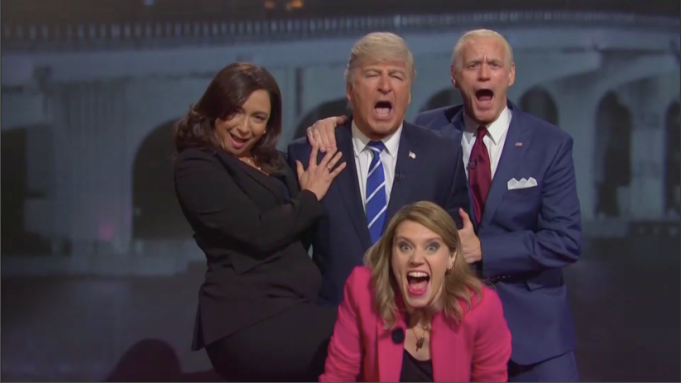 The late-night sketch comedy show was expected to recreate this political event, especially given that Trump’s real-life town hall aired on “SNL’s” own network, NBC. After it was announced that NBC would air that event, a number of top performers and producers — including talent that currently work on NBC shows — signed a letter asking the network brass to rethink that decision. The “SNL” team did not sign that letter, clearly working on a different kind of reaction, which played out on Oct. 17 in both the cold open and “Weekend Update” portions of the show.

“One town hall was a thoughtful, cogent discussion of the issues facing our country. The other featured President Trump,” the cold open began.

The town halls were then “recreated” and intercut with each other to simulate the at-home viewer “flipping back and forth” between them. The vibe Biden’s town hall was going for, Day as Stephanopoulos said, was “poorly attended college lecture” and would feature “softball questions” from those who support Biden, as well as those who hate Trump, Day as Stephanopoulos noted — although he did ask those who were asking questions to “limit how many times you outright say you hate President Trump.”

The highlight of Biden’s town hall was his response to how he would handle COVID. “Here’s the deal, unlike the president I actually have a plan.” When asked what it was, he replied, “A plan? It’s a detailed proposal for doing or achieving something.” When it came to his plan, he said, “Let me start with a story, mixed with a complicated math problem: If you have three million doses of vaccine and the vaccine leaves Chicago at 10 a.m., what time would it arrive in Washington, and please show your work.”

Every other time his town hall was on-screen, he was in the middle of a seemingly long-winded story, including talking to God and telling him he could save the country, pulling on a “Mister Rogers” sweater and painting in a Bob Ross style wig.

Meanwhile, when it came to Trump, McKinnon’s Guthrie said right off the bat that “if you were mad at NBC for doing this town hall, just let me get a few questions in and I think you’ll thank me.”

She started by asking why he won’t condemn white supremacy, to which Baldwin’s Trump responded, “I do. I do condemn it. I’ve always more or less condemned it.” Addressing QAnon specifically he said, “You mean the group that thinks that democrats are a cabal of Satan-worshipping pedophiles, that I’m their messiah? I don’t know anything about them at all. All I know is they’re against pedophilia and I agree with that. If anyone is against pedophilia it’s me, the man who was close personal friends with one of the most famous pedophiles on Earth. Rest in power, Jeffrey [Epstein].”

Telling Baldwin’s Trump he wasn’t just someone’s crazy uncle didn’t deter him either, noting this is just a preview to what’s to come in a few months when households’ actual crazy uncles gather for Thanksgiving. “Stand back and stand by,” he said, giving a salute.

Baldwin’s Trump also evaded McKinnon’s Guthrie’s questions about when he last tested negative for COVID by saying he got tested all the time and “there are so many COVIDs: COVID-12, COVID-14” and that his doctors say he is doing great and “my lung is beautiful.”

“I never died or saw hell or the devil — he never showed me a list of my sins. I was just alive and strong the whole time,” Baldwin’s Trump said.

Rudolph’s Harris interrupted Trump’s town hall to ask “what the hell is happening” with the masked woman behind Baldwin’s Trump who was nodding furiously and at one point even twerking.

“Either that’s Candace Owens in a wig or that girl answered the wrong Craigslist add,” she said.

The sketch gave each candidate a chance for closing remarks. Carrey’s Biden promised he would not tweet once if he is elected (“because I don’t know how”) and he will only have one scandal: “I will mistake Angela Merkel from my wife from behind and tell her she’s got a rocking caboose. There’s no malice in that.” Baldwin’s Trump asked America if they are better off than they were four years ago, and when a graphic of America on a globe exclaimed a resounding, “No,” he replied, “All right, then just try and take me alive.”

Later, during “Weekend Update,” Michael Che reiterated that NBC aired the Trump town hall because “what can I say? We have a type” as a three-split graphic of Bill Cosby, Matt Lauer and Donald Trump appeared next to him.

“Who are these town halls even for? Who’s still on the fence about this election?” he said. “Whether you’re voting for Trump or Biden, you definitely made up your mind and you’re probably not thrilled about it. These choices are so bad that Kanye’s running and people are like, ‘Maybe?’ That wouldn’t happen if we had actually good candidates. When Kennedy was running against Nixon, nobody was like, ‘What about Little Richard?'”