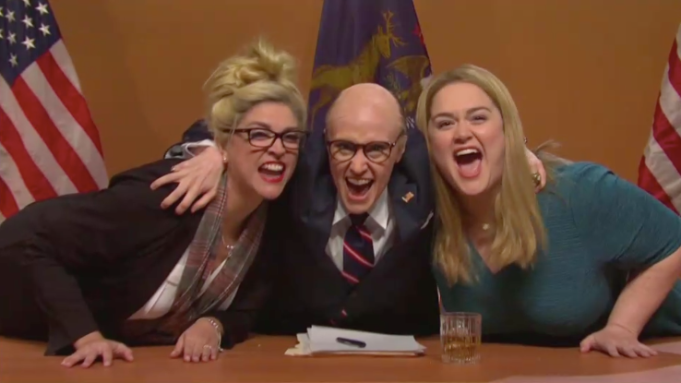 Although the swearing-in of President-elect Joe Biden is just about six weeks away, President Donald Trump has still been dominating the news, most recently with a hearing regarding allegations of fraud in the 2020 presidential election. Naturally, for “Saturday Night Live’s” first show back after a few week hiatus, the late-night sketch comedy series led with a satirization of that televised event, featuring Kate McKinnon as Trump’s lawyer Rudy Giuliani, Cecily Strong as “star witness” Melissa Carone and Chloe Fineman as “Nicole Kidman’s character from ‘The Undoing'” (aka Grace Fraser).

McKinnon began the sketch, which you can watch above, by saying it was exciting to “just be in a courtroom where I’m not the defendant.” Planning to “prove” that the election was stolen “with a level of trickery” not seen since Harry Houdini, McKinnon’s Giuliani was interrupted by fart noises that the character claimed “wasn’t me; that was you guys” and then prepared to present a number of “barely intoxicated” eye-witnesses to fraud.

Strong, whose recurring character “The Girl You Wish You Hadn’t Started a Conversation With at a Party” had been compared to Carone on social media this week, swore in saying she swore to tell the whole truth, “so help me, gob” and then told the Michigan State Senate they were going to regret asking her to speak.

“I personally saw hundreds, if not thousands, of dead people vote,” she said. “I ‘member because I was walking to and they were walking in and then they gave their votes to democrats and you probably did something crazy with them. … Did you talk to the dead people?”

Strong also parodied Carone’s mispronunciation of “affidavit” during her real-life testimony. When it sounded like she said “after David,” Strong’s Carone said, “That’s right ’cause David signed and then I signed after David.”

She also said the election was “random”: “I voted for Trump, yet Biden won? Hmm, maybe a little too random. You aren’t even going to admit that Dominion cheated? … For starters, they cheated me out of my cheesy bread,” she said, assumed to be confusing Dominion with Domino’s.

“Either way, my vote took longer than 30 minutes, so it’s supposed to be free,” she said.

Lauren Holt portrayed Trump’s co-counsel Jenna Ellis, while Heidi Gardner played a so-called eye-witness to fraud, claiming she ate ballots because “the democrats said, ‘It’s lunch time’ and then they opened the food truck and it was full — full of ballot sandwiches, ballot pizzas, ballot steaks and ballot spaghetti.” Beck Bennett as MyPillow CEO Mike Lindell followed Gardner, who just tried to sneak in an ad for his product. Later in the sketch Alex Moffat played a witness who said he saw a UFO and its aliens filled out ballots, Pete Davidson and Kyle Mooney reprised their roles as the suspects plotting to kidnap Michigan’s governor Gretchen Witmer, and McKinnon’s Giuliani called Fineman as Grace to testify.

“Your honor, my husband Hugh Grant is innocent,” she said. “There’s no way he could have been that murderer. He’s too hot and white.

But Strong continued to steal the spotlight as she branded a martini glass with quips like, “Even though it’s a fraudulent erection, it can still get you pregnant” and saying her drink was “actually the COVID vaccine.”

“I would say the defense rests, but we will never rest — not until this election is overturned,” said McKinnon’s Giuliani. “Or I get a full pardon and $10 million in cash. And if you like what you saw here today, we’re having a press conference right after this at the Ritz Carlton Plumbing and Heating Supply Company right off I-94 between a dirty movie theater and a crematorium.”