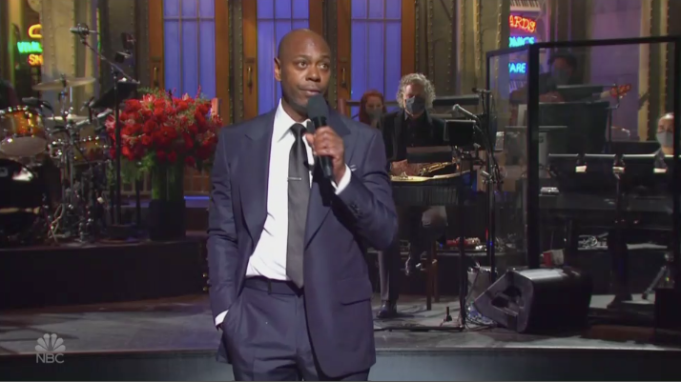 Returning to host “Saturday Night Live” for the second time, comedian Dave Chappelle couldn’t help but address the political news of the day — and how they related to politics of recent past — in his opening monologue.

The Nov. 7 episode was the post-election episode, the second time he had that prime hosting spot. And just hours before the show went on the air, the election was called for Joe Biden and Kamala Harris, and they delivered victory speeches in Delaware.

Chappelle started his monologue, which you can watch above, by talking about his great-grandfather — a man he never met but heard about all his life, he said, and a man who was a slave for 10 years of his life before learning to read and then dedicating his life to education, the freedom of Black people and Jesus.

“It was a pretty amazing story my great-grandfather had, and I thought about him all day because I wish I could see him now,” Chappelle said. “And I wish he could see me. Because I wonder what he would say.”

While the sentiment was sweet and serious in one minute, Chappelle’s usual sharp humor turned it in the next when he noted that both Netflix and HBO Max are streaming a show that bears his great-grandfather’s name (“Chappelle’s Show”) and he didn’t get paid for that. “If he could see me now, he’d probably be like, ‘This n—- got bought and sold more than I have,'” he said.

He also spoke of a friend of his in London who contacted him earlier in the day who told him she thought the world would be a “safer place now that America has a new president.” His response was that “America doesn’t.”

“Do you guys remember what life was like before COVID?” he asked the studio audience. “It was a mass shooting every week. … Thank god for COVID. Something had to lock these murderous whites up, keep them in the house.”

Chappelle also reflected on his recent months during the pandemic, performing stand-up comedy in corn fields in the small town in which he lives. While he said in some ways the shows have saved the town, he also pointed out that his neighbors have complained his shows are too noisy.

“They had a whole Zoom meeting about me,” he said. “‘My kids are trying to sleep and all they hear is the n-word.’ I said, ‘Was I saying it or were you?'”

And he commented on how he didn’t understand why “poor white people” don’t want to wear masks: “You have no problem wearing them at the Klan rally, wear them to Walmart too.”

Mentioning that some people got paid more from a stimulus check than their actual paychecks, which makes them not want to work, Chappelle pointed out that things are reminding him of Ronald Reagan and how he used to claim Black people were “welfare people and drug addicts. Who does that sound like now?

“We’re trying to move forward, these white n—– holding us back. Don’t want to wear your mask? Try wearing the mask I’ve been wearing all these years,” he said. “I can’t even tell something true unless it has a punchline behind it. You guys aren’t ready. You aren’t ready. You don’t know how to survive yourselves. Black people, we’re the only ones who know how to survive this. Whites, come, hurry quick; come get your n—- lessons. You need us. You need our eyes to save you from ourselves.”

Chappelle saying Trump is gone got big cheers, which he followed up by saying, “I thought the guy was at least an optimist” and admitting that he was not as optimistic. “There are bad people on both sides,” he said. When the response was tepid, he noted, “All right, just trying them out.”

But he did follow it up by calling Trump a “racist, hilarious son of a bitch” for the former president calling coronavirus the “Kung Flu.”

“Donald Trump’s a wild guy,” he said, referencing how he was just guessing how to cure coronavirus during a pandemic. “How about some bleach? Some bleach directly in our body. Oh boy, the Secret Service is going to have to childproof the White House now … ‘Mr. President, don’t touch that stove, it’s hot; turn those scissors around, Mr. President, if you’re going to run around the house.”

Trump ended up contracting COVID-19, which Chappelle called “hilarious” because it “was like when Freddie Mercury got AIDS; nobody was like, ‘Well how did he get it?’ This guy was running around like the outbreak monkey; he looked like a 1970s penis just raw-dogging Earth.”

Chappelle also asked the audience to think about what kind of a man, let alone leader, lets people fight and die while he prioritizes himself. “A white man,” he said. “I don’t mean to put this on the whites, but I’ve been Black a long time, I’ve noticed a pattern.

“But if you’re a good white and you actually want to help then join me,” he continued. “My plan is called the kindness conspiracy — random acts of kindness for Black people. Do something nice for a Black person just because they’re Black, and you’ve got to make sure they don’t deserve it … the same way all them years they did terrible things to Black people just because they’re Black and they didn’t deserve it.”

He also referenced the last time he hosted and how bad it felt for many people who had just learned Hillary Clinton would not be the 45th president. Then, he took part in a sketch that showed a group of friends watching the results roll in together, starting out cocky but growing more and more confused and agitated — except for Chappelle’s character and a surprise guest appearance by Chris Rock, who saw it coming. Now, he implored people to remember that half the country feels like that now and that being a humble winner is important. But he also pointed out that the life expectancy of white America is dropping due to drug addiction and suicide. Addressing the “white anguish” that comes with feeling like no one understands, he said he promises he does know how that feels.