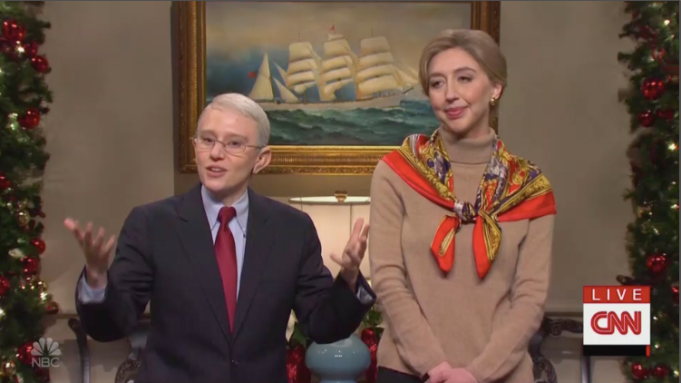 Eleven months into the COVID-19 pandemic and the FDA approved the emergency use of a vaccine from Pfizer. Just a day later, NBC’s “Saturday Night Live” offered its commentary on the situation, using its Dec. 12 episode cold open sketch as an opportunity for Kate McKinnon to portray Dr. Anthony Fauci and Heidi Gardner to take on Dr. Deborah Birx.

The duo appeared in the sketch, which you can watch above, as talking heads on CNN. Beck Bennett’s Wolf Blitzer introduced the situation with the vaccine by saying, “It’s just like the PS5: Everybody wants it, nobody can get it and if you’re rich you already had it a month ago.”

The majority of the sketch pointed out Dr. Fauci’s accomplishments and how beloved he has become because of them, mentioning that he would be joining President-Elect Joe Biden’s administration and, at one point in the sketch, tossing bras on him because “any other year I’m a 2, this year I’m a 10.” Meanwhile, Gardner’s Dr. Birx pointed out that she has also been involved, although in a less high-profile way.

“Remember when Trump said to inject bleach and I did a stanky little face?” she said. “I almost whispered, ‘No.'”

When discussing the actual vaccine, McKinnon’s Dr. Fauci said they were doing it “World War II style: we made England go in first, see what’s what and then we swoop in at the end and steal the spotlight.”

The plan for the roll-out was also explained as healthcare workers getting it first (“Your McSteamys, McDreamys, what have you,” McKinnon’s Dr. Fauci said), followed by “anybody named Mildred, Boris, Blanche, Mabel or Walter,” said Gardner’s Dr. Birx.

“And then after the elderly, we’ll move onto prisoners, then teachers, then sick people, then everybody else,” she continued.

However, the state distribution rollout, they joked, would be alphabetically, “starting with ACalifornia and then BaNew York City.” Each locale’s vaccine would be received in a regionally-specific way, from “tossing it like Mardi Gras beads” in Louisiana to it being “vinegar-based” in North Carolina, they said.

“In New York the vaccine vessels will be very thin on the bottle, whereas in Chicago it will be more of a deep dish,” Gardner’s Dr. Birx said.

No date was given for the start of this plan, with McKinnon’s Dr. Fauci saying that “this president has done about a good a job with this rollout as I did throwing out the first pitch at the Nationals game.”

They also discussed the need to keep the vaccine cold, saying it would come in Coors Light cold-activated cans, and the need to track patients to ensure everyone comes back for the second dose. “Using a technique long-employed by one-night stands who have caught feelings,” McKinnon’s Dr. Fauci said, “we’re going to have them leave a necklace at the CVS so they have an excuse to come back.”

Later in the episode, guest host Timothée Chalamet played a rebellious coronavirus molecule that chugged Purell and praised New York Governor Andrew Cuomo, which made him a disappointment to his parents, who had spent the year traveling from China to Italy to Florida (“How great is Florida!?” they quipped) and pointed out that the only leader they recognized in their household was Donald Trump because “he introduced us to everyone he knows, even after he was infected.”

“I’m getting the vaccine,” Chalamet’s molecule said, blaming his parents for his attitude. “Dad’s been so focused on the second wave he can’t even hear his first-born son crying out for help.”