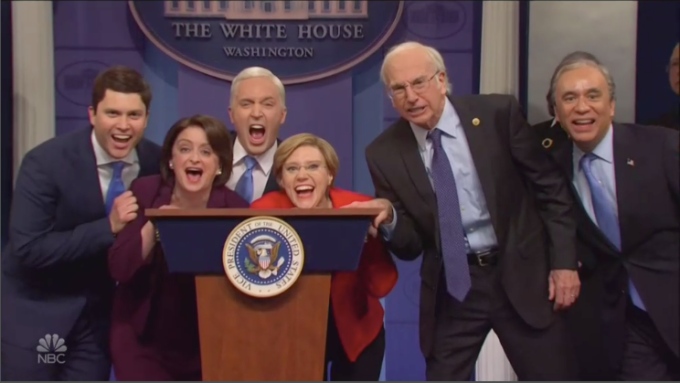 Vice president Mike Pence has been put in charge of managing the coronavirus concerns, and that is giving Beck Bennett a chance to step into the spotlight on “Saturday Night Live.” But he wasn’t there alone, as the sketch quickly turned toward the democratic presidential hopefuls, including special guest host John Mulaney as Joe Biden.

In the Feb. 29 cold open sketch, Bennett’s Pence delivered a White House press conference, “even though I don’t believe in science,” he said. “I have to admit, this disease has been quite the test of my faith — just like dinosaur bones or Timothee Chalamet.”

He then introduced the team assembled to tackle this new disease — a team he said was made up of some of the best minds “left in government.” This included Kenan Thompson as Ben Carson who joined Bennett’s Pence at the podium.

Thompson’s Carson said the coronavirus “is going to be bad” before holding up a sketch of Stitch (from “Lilo & Stitch”) and saying that is what the disease looks like. “He’s a nasty little thing, he’ll bite you.”

The sketch did take the time to mention the very real precautions that can be taken when it comes to stopping the spread of contagious viruses, such as covering one’s mouth when he or she coughs, but of course that, too, came with jokes. Another precaution, per Bennett’s Pence was “closing your eyes during intercourse,” while Thompson’s Carson suggested purchasing a “Make America Great Again” face mask from the White House website.

“It may take a couple of months for delivery because they are made in Wuhan, China,” he warned.

When Bennett’s Pence opened the conference up to questions, Fred Armisen as Mike Bloomberg stood up, identified himself as “from Bloomberg News” and asked, “Doesn’t it seem like a good time to have a president that’s competent and capable, even if that candidate lacks charisma or ability to connect with human beings?”

He was soon followed by Kate McKinnon as Elizabeth Warren, Larry David as Bernie Sanders, Colin Jost as Pete Buttigieg, Rachel Dratch as Amy Klobuchar and Mulaney’s Biden, who was wearing a sash that said “South Carolina” on it, celebrating “who kicked butt in South Cracker Barrel.” (Biden won the South Carolina primary earlier in the day.)

He then launched into a long rant about how he palled around with Nelson Mandela “‘Green Book’ style, ran into the ebola monkey and managed to “convince Mandela that whitey was OK” by wrestling the monkey.

Meanwhile, due to the coronavirus, David’s Sanders pointed out that “universal healthcare doesn’t sound too crazy now.”

The more the sketch went on, the more shots the candidates took against each other, such as McKinnon’s Warren pointing out that Bloomberg supported George W. Bush. But occasionally the candidates pointed out their own shortcomings, such as Armisen’s Bloomberg saying what was in the NDA he asked an employee to sign wasn’t that bad — it was just a joke to a female employee: “Knock knock, it’s your boss Mike, listen get rid of that baby.”

Jost’s Buttigieg turned it back around to the original matter at hand, though, by saying he was the only candidate who wouldn’t lose to the coronavirus because the others “are all in high-risk demographics.”

“You want to talk high risk? I have it on good authority that Pete Buttigieg is a hand-cougher,” David’s Sander said. “America doesn’t need a hand-cougher. They need a president who is old enough to know Typhoid Mary.”