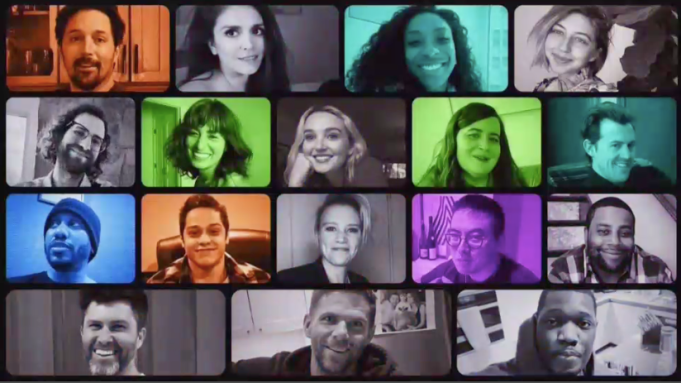 When something unfathomable happens, many try to make sense of it (or simply provide an escapist outlet from it) through humor.

And that is exactly what “Saturday Night Live” did when returning with original material on April 11, producing content remotely amid the coronavirus pandemic.

Tom Hanks, who went public with his own COVID-19 diagnosis last month, served as the host for the episode, and Coldplay’s Chris Martin was the musical guest. Larry David also reprised his role of Bernie Sanders with a special message after Sanders ended his campaign for president earlier in the week, Fred Armisen popped in to help Beck Bennett and Kyle Mooney come up with a sketch, and Alec Baldwin called into “Weekend Update” as Donald Trump.

Armisen, as well as other former cast members including Adam Sandler, Bill Hader, Tina Fey and Maya Rudolph also sent in messages — and a special song — to pay tribute to music producer Hal Willner, who sadly passed away earlier this week, after reportedly experiencing coronavirus symptoms. Their footage was cut together with similar clips of messages of love and memories of the the man and his indelible contributions to the score of the show in a documentary short.

While the episode mentioned coronavirus quite a number of times, from Hanks’ opening monologue to a reality dating show sketch about people coming out of quarantine, it was mostly touched on with messages about the importance of social distancing and washing one’s hands. The overarching message of the episode, as Hanks said explicitly, was that everyone was in this together.

Without a cold open sketch this time, Hanks kicked off the episode with a nod to Netflix’s “Tiger King” docuseries by addressing the audience with a “Hey all you cool cats and kittens, it’s me, your old pal.”

He noted that it is “a strange time to try and be funny, but trying to be funny is ‘SNL’s’ whole thing, so we thought, ‘What the heck? Let’s give it a shot.'” Acknowledging the “why him” as a host of the episode, the now-10 time host said that he has been a “canary in the coal mine” for the virus: “Ever since being diagnosed, I have been more like America’s dad than ever before since no one wants to be around me very long and I make people uncomfortable.”

Also in his monologue, which you can watch above, Hanks spoke of his March diagnosis in Australia, commenting on how they use Celsius when taking temperatures, telling him 36 degrees was OK but 38 was bad, “like how Hollywood treats female actors,” he said.

Giving an update on his health, he said he — as well as his wife Rita Wilson, who was also diagnosed — are doing fine and are hunkered down, like everyone else.

“SNL” was not true-live as it aired coast-to-coast on April 11: As cast member Aidy Bryant explained on Twitter just minutes before the show was set to start, they “cobbled it together out of a bunch of little pieces” during the week and were at home watching it air alongside the audience “for the first time ever.”

But because they wanted it to feel as much like a regular episode as possible, Hanks incorporated an audience question and answer section into his opening monologue. Of course, he played all of the audience members in this situation.

“Will it be weird to see sketches without big sets and costumes? Sure. But will it make you laugh? Eh, it’s ‘SNL,’ there will be some good stuff, maybe one or two stinkers, you know the drill,” Hanks said. “Stay safe. We are in this for the duration, and we are going to get through this together. We are going to thank our hospital workers, our first responders, and all of our helpers… the men and women who are keeping this country going when we need them more than ever. We’re going to take care of them, and we’re going to take care of each other.”

The show began with the cast checking in with each other through the digital meeting app Zoom, with Kate McKinnon noting that they were live “sometime between March and August.” The specially-shot opening titles included each cast member at home — some with pets and human kids — as well as the band members playing their parts of the theme song from their own houses.

Pete Davidson delivered two music videos from his mother’s basement, where he lives: The first saw him singing about missing an ex in the vein of a “Drake song”; the second was him as a “new kind of rapper” who had $2,000. McKinnon donned a Super Diva sweatshirt and glasses to play her recurring role of Ruth Bader Ginsberg in a workout video so she didn’t gain the “quarantine 15 ounces.” Heidi Gardner finally got to deliver a version of her recurring character Bailey’s YouTube show, while Mikey Day took on a sketch about a Twitch streamer, and Alex Moffat played a sports reporter who had to find household items to pit against each other since live sports have been canceled. They also had fun with tropes of business meetings being done over Zoom; with a quarantine edition of “MasterClass,” in which Chloe Fineman played Timothée Chalamet, JoJo Siwa and Carole Baskin; and with a new animated short that took on “Middle-Aged Mutant Ninja Turtles.”

When it came to David’s message as Sanders, he called himself “always the bridesmaid, never the Democratic nominee” and said the stress of the campaign and the coronavirus he had lost a lot of hair on top — but that because he’s a “78-year-old man living in Vermont, I have a whole room full of toilet paper.”

He took some time to answer questions he knows his supporters have, such as, “What the hell happened?” To this, he said, “It didn’t help that the media lined up behind Joe Biden like he lines up behind the set of ladies’ shoulders.” So will he endorse Biden? David as Sanders said yes — especially because he said he would do anything to defeat Donald Trump — it was just about “how” to endorse him.

He wanted to move onto the real problem of the day, though, the virus, noting that healthcare workers “don’t even have the protective equipment, they don’t have Purell, they don’t even have the little keychain that has the bottle of Purell that goes on your purse. Their gloves have holes in the fingers like Oliver Twist — and I should know, I went to school with Oliver Twist.” He offered advice on tackling the pandemic, which included “no more handshakes, no more high-fives, and don’t even mention the Euro kiss. The only greeting we need is the half-wave. It’s 50% hello and 50% ‘Ehh go away.’ It’s worked for me for years.”

Martin performed Bob Dylan’s “Shelter from the Storm” on guitar, and in introducing him, Hanks seemingly paid subtle tribute to Fountains of Wayne cofounder Adam Schlesinger, who died from coronavirus complications on April 1: Schlesinger wrote the theme song for Hanks’ 1996 film “That Thing You Do,” and Hanks wore a T-shirt bearing the logo of his Playtone company, which produced the film. “There would be no Playtone without Adam Schlesinger, without his ‘That Thing You Do,’” Hanks tweeted.

Martin, presumably performing from his home studio — which included handwritten signs reading “Entrance to trains,” like the “SNL” stage — raced through a solo acoustic version of Dylan’s 1975 song. While the track is from Dylan’s “Blood on the Tracks” album — which contains songs written in the wake of his divorce from Sara Lownds — and its lyrics are filled with Biblical references, Martin’s choice appears more reflective of the song’s title.

Colin Jost and Michael Che delivered a special split screen edition of “Weekend Update” that had friends listening in so they could have a laugh track.

“Doing comedy with no audience, it kind of like when you’re in a long distance relationship and your girl is like, ‘We can’t have sex, but we can Facetime,'” Che said.

“Weekend Update” discussed Dr. Anthony Fauci, Sanders dropping out of the Democratic presidential race, Harvey Weinstein reportedly recovering from coronavirus and that this past week included #NationalBeerDay, which Jost said marked the first time alcohol actually helped him remember what day it was. Che also mentioned that he lost his grandmother this week, and she really liked “Joke Swap,” so he put Jost on the spot for one. But after he read it, red-faced, Che noted his grandmother never watched the show, he “just wanted to see [Jost] do that.”

When Baldwin called in as Trump, he said he was happy to report that America was No.1 when it came to coronavirus, his ratings are up, and “every night at 7 p.m. New York claps and cheers over what a great job I’m doing.”

This special episode marked “SNL’s” first time back on the air with new material since March 7 when Daniel Craig hosted. That episode, as well as the one before it, did work coronavirus into some sketches, most notably a Democratic hopeful press conference cold open, as well as a cut for time “Love Is Blind” sketch that featured cast members as reality show contestants looking for love in quarantine. But the next original episode in the 45th season, set for March 28 with John Krasinski as the host, had to be canceled, as health measures that shutdown film and television production and urged people to stay home and shelter in place were already underway.

This was the first “SNL” to be produced remotely, but it is not yet known how many more episodes like it may follow. The show set a rerun of the John Mulaney/David Byrne episode for the April 18 episode, but there are still quite a few weeks left in the traditional broadcast television season.

Jem Aswad contributed to this story.