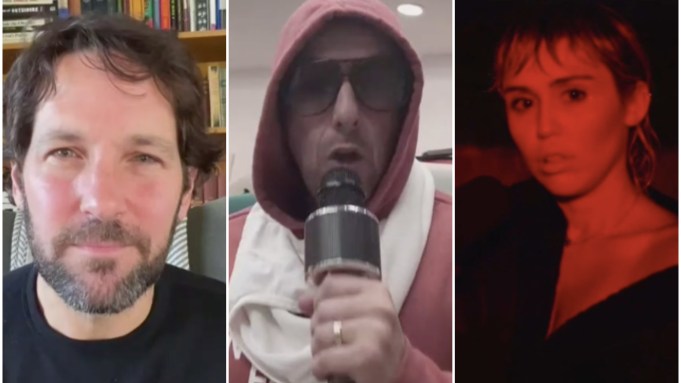 The second-ever “Saturday Night Live: At Home” edition was a star-studded affair.

Brad Pitt was the first special guest in the April 26 virtual episode of the NBC late-night sketch comedy show. Delivering a cold open in which he played Dr. Anthony Fauci and addressed rumors about the testing of and cure for coronavirus, Pitt previewed that the evening’s show would be sort-of live from around the country. After a week off since its first-ever remotely-produced episode, “SNL” returned with big names across film (Pitt), sports (Charles Barkley), music (DJ Khaled) and TV/former cast members (Fred Armisen, Jason Sudeikis). And that was all just in the opening minutes of the show.

Pitt’s cold open set the tone for the episode as delivering important news about the virus and stressing the importance of social distancing, but as sketches went on more humor was woven into how that message got delivered. Thompson hosted a new edition of “What’s Up With That?” that featured Barkley and Khaled as themselves and Armisen and Sudeikis as members of the show’s crew. It also put up an image of Bill Hader as Lindsey Buckingham to continue the runner that they never let Buckingham speak on the show.

In addition to Sandler and Schneider, Pete Davidson’s mom, Amy Waters Davidson, who has appeared with him in “Weekend Update” segments in the past, appeared in her son’s latest music video — this time about going crazy while being quarantined with his family. Davidson lives in his mother’s basement and he sang about all of the things he has become sick of while spending two months on the couch. Sandler did a verse on the song, while the short also featured glimpses at some of Davidson’s other famous friends, including Tan France and Judd Apatow, via a group Zoom chat.

“Saturday Night Live” has led the charge of remotely-produced episodes, but also coming up on NBC is a special “Parks and Recreation” reunion, while over on CBS, freshman drama “All Rise” will deliver a virtual hour.