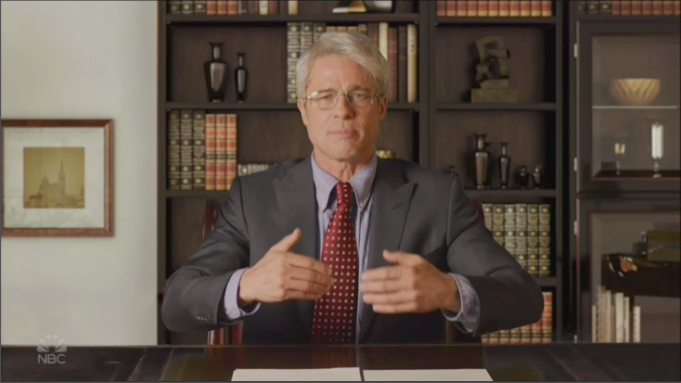 “Saturday Night Live” brought back its infamous political cold open sketch in its second-ever “At Home” edition, and Brad Pitt was along for the ride.

Pitt portrayed Dr. Anthony Fauci in a sobering address about coronavirus, acknowledging that “there has been a lot of misinformation out there about the virus” and deciding to clarify “what the president was trying to say.” Instead of reaching for jokes, the show used its platform to deliver real information about the state of the pandemic.

The NBC late-night sketch comedy show cut in real-world footage of Donald Trump’s speeches about coronavirus, starting with his claim that he had had some great meetings and there would be a vaccine “relatively soon.” To this, Pitt as Fauci clarified that “relatively soon is an interesting phrase. Relative to the entire history of Earth? Sure, the vaccine is going to come real fast. But if you were to tell a friend, ‘I’ll be over relatively soon’ and then showed up a year and a half later, well, your friend may be relatively pissed off.”

Turning attention to Trump’s “like a miracle, it will disappear” claims, Pitt as Fauci admitted that “a miracle would be great” but noted that “miracles shouldn’t be Plan A. Even Sully tried to land at the airport first.”

He also had “a couple of things” to say about the state of tests. First, he said he didn’t know if he would describe the test as “beautiful — unless your idea of ‘beautiful’ is having a cotton swab tickle your brain.” Additionally, he wanted to point out that “almost no one can get a test.”

Pitt as Fauci had no verbal response to Trump’s musings about injecting disinfectant to “knock out” the virus, just a dumbfounded look. And he facepalmed — even though he knew he “shouldn’t be touching [his] face” at the idea that you could stop the virus by hitting the body with light.

“Yeah, I’m getting fired,” he said. “But until then, I’m going to be there, putting out the facts for whoever’s listening. And when I hear things like, ‘The virus can be cured if everyone takes the Tide Pod challenge, I’ll be there to say, ‘Please don’t.'”

At the end of the sketch, Pitt pulled off his Fauci wig and thanked the real Dr. Fauci for his “calm and clarity during this unnerving time.” He also thanked the medical workers, first responders and their respective families.