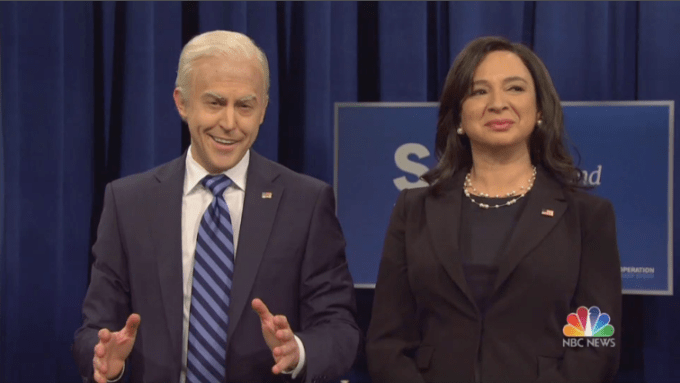 The final episode of “Saturday Night Live” for the tumultuous year that was 2020 started with both the hot topic of the day and the hot topic of the month: who would take over the role of President-Elect Joe Biden on the late-night sketch comedy series and the COVID-19 vaccine, respectively.

The episode aired just hours after Jim Carrey shared news that his stint as  Biden was only set to be six weeks and therefore he would not be continuing through the rest of the 46th season of the late-night NBC sketch comedy series. After much speculation on social media throughout the day, “SNL” cast member Alex Moffat took on the politician, appearing in the Dec. 19 cold open sketch alongside Beck Bennett as Vice President Mike Pence, Kate McKinnon as Rudy Giuliani, Kenan Thompson as Dr. Ben Carson and guest star Maya Rudolph as Vice President-Elect Kamala Harris.

The sketch began with Bennett’s Pence receiving a COVID-19 vaccine. “I’m sure all Americans are excited to see me, the guy who let COVID spread everywhere, get one of the vaccines,” he said.

He then went on to assure the public watching from home that the vaccine was “completely safe and harmless,” which was why “Trump refuses to take it or talk about it.” Instead, he sent his No. 2 to be his “human shield,” Mikey Day as the doctor who would administer the vaccine jumped in.

Bennett’s Pence began to pull his pants down, saying, “It’s OK, if you’re a doctor you can go in,” but Day corrected him to say it was “a simple injection in your arm.” At a time when COVID cases are continuing to climb, the sketch served more as an educational tool for those who were still uninformed or otherwise wary about the vaccine than it did a parody.

When Rudolph’s Harris showed up, right after the vaccine was administered, Bennett’s Pence asked her how she “even got into the White House,” to which she replied, “I won more votes” and then slapped him when he said she and President-Elect Joe Biden would only “be in here soon if those election results hold up.”

“Trump made me do it,” he continued.

McKinnon’s Giuliani showed up because he “heard they were giving out free meds,” while Thompson’s Carson asked what he should do now, as well as what his job even was so he could “put it on my resume.”

Moffat’s Biden entered with a boot on his foot to signify his recent injury, obtained from playing with his dog, but quickly did a somersault to prove he was doing just fine.

“You look different somehow,” Bennett’s Pence said, in reference to the recasting.

“I’m like Colonel Sanders: every time you see me, I’m a different guy,” Moffat’s Biden responded. “There’s a good chance the next time you see me I’ll be Mario Lopez.”

He was all set to get the vaccine, too, because Harris was worried about him. “I’m worried about you, Joe, especially because you’re already in a cast on day minus-40 in office,” she explained.

“I just want to let the American people know one thing,” he said. “You’re about to have a real leader again, and you’re going to have the most diverse cabinet in the history of American politics.”

“And I will make sure that Joe never specifies what he means by diverse,” Rudolph’s Harris added.

Moffat now joins the ranks of Kevin Nealon, Jason Sudeikis, Woody Harrelson, John Mulaney and, of course, Carrey in the list of “SNL” impressionists of Biden.