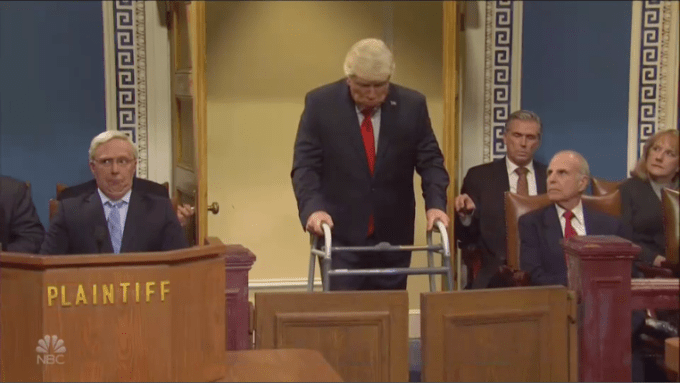 For those who have been disappointed with Donald Trump’s impeachment trial, “Saturday Night Live” has an alternative.

The Feb. 1 episode of the late-night sketch comedy show kicked off with “The Trial You Wish Had Happened,” a cold open sketch featuring Kenan Thompson as Judge Mathis (yes, TV’s Judge Mathis) taking over the proceedings from Mikey Day as Chief Justice John Roberts. This sketch also saw the return of Alec Baldwin as Trump, with a little bit of Harvey Weinstein mixed in: When he entered the courtroom, he was bent over a walker, as Weinstein has been every day he has arrived at court for his rape trial.

“This court needs a real judge who got some big brass ones under his skirt,” Thompson’s Mathis said, taking the bench with his own gavel.

Entering the courtroom next was Beck Bennett as Mitch McConnell who just wanted “to remind the American people that all men are innocent after proven guilty.”

Kate McKinnon took on the role of Lindsey Graham who stepped into the defendant’s box saying chances of getting re-elected “ain’t going to happen unless I kiss Mr. Trump’s grits and tickle his biscuits, and that’s why I do declare that Mr. Trump is innocent.”

In this trial, witnesses were called “because that’s how a damn trial works,” Thompson’s Mathis said. First up in that regard was Cecily Strong as former security advisor John Bolton.

“The things I saw President Trump do and say made me deeply worried about the future of democracy,” Strong’s Bolton said.

When asked why he was only admitting that now, the response was “because I’m a messy bitch who loves drama,” which excited the judge. But Strong’s Bolton wasn’t about to offer any more “free spoilers” when he had a book to sell. “It’s called ‘Harry Potter and the Room Where It Happened,'” he said.

Bennett’s McConnell objected to Bolton as a witness without also calling Hunter Biden.

“Oh you know I’m calling Hunter Biden, too. What do you think, I hate hilarious witnesses?” Thompson’s Mathis said.

Pete Davidson then rolled onto the Studio 8H set on a hoverboard, vaping, pointing out that he’s not actually apart of the issue but “the president is just kind of pointing at me to distract from his own crimes.” But he then did go on to say his current job is being on the board of a money laundering company called Nepotismo.

“I’ve been selling Biden steaks from my office at the top of Biden Tower,” he said, “and letting foreign leaders stay at Biden-a-Largo. Oh no wait, that’s the president’s sons. Ya burnt!”

When Baldwin’s Trump entered, he addressed the judge by saying he was a “very sick old man” who could “barely get around the house,” so how could he withhold aid from Ukraine?

“In what sense? Because Harvey and I overlap in a few areas,” he responded.

His real defense, though, was that “I’m guilty, but it ain’t no thing.”

Alex Moffatt portrayed Adam Schiff, to represent the Democrats who might have a response to this, but when he didn’t, Thompson’s Mathis called in “a real lawyer” aka Kyle Mooney as “My Cousin Vinny.”

“There’s no way this guy Trump only met with two Uks,” he said, as in two Ukranians.

“That is too dumb, even for this,” Thompson’s Mathis said before allowing Baldwin’s Trump to make a closing statement.

“Ladies and gentlemen of this government place,” he began. “What I’ve learned from this trial is that clearly nothing I do or say has any consequence, so I’d like to come clean about everything. The call with the Ukraine wasn’t perfect — it was illegal and, frankly, it was a butt dial. Also, I watch CNN all the time and it’s awesome. I hate the following states: Iowa, Michigan, Pennsylvania, Arkansas and West Virginia. West Carolina, I’m sorry. I cheat all the time: at golf, taxes, wives, elections, in bathroom scales. I’m not 239 pounds; I’m 475 pounds. And I don’t really need this walker either, although it does help me be lazier, which I like.”

Also, he said he cut the funding to the CDC so this “Wang Chung virus” was going to be really bad.

“But this trial has been incredible because I now have a best friend,” he said, calling McConnell a “ride or die.”

This caused Bennett’s McConnell to begin singing about “What have I done?”

Naturally, Mathis found Trump guilty. His sentence was a fine and to have to say something nice about Nancy Pelosi, to which Baldwin’s Trump said, “Her body’s an eight.”