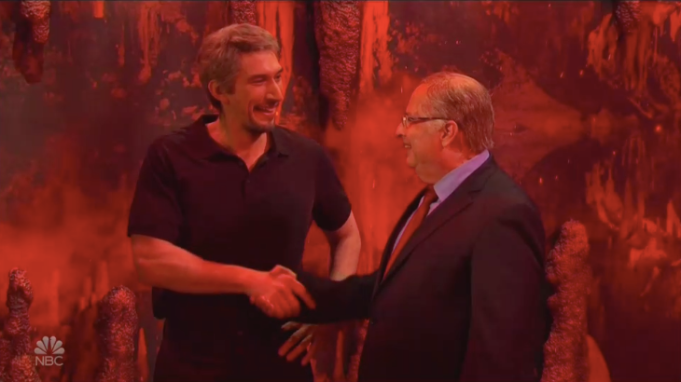 The 45th season of “Saturday Night Live” has been on hiatus for a month, and what a month it has been. The last episode aired just days after Donald Trump was impeached, and this week alone saw House impeachment managers presenting their case on why it would threaten the country’s security for him to stay in office. Naturally, the late-night sketch show addressed that from the moment it returned.

Former cast member Jon Lovitz stepped back into Studio 8H to play Alan Dershowitz in the Jan. 25 cold open. He started out by prepping to address the Senate but then ended up in hell — and when he did, he was visited by his former client, Jeffrey Epstein (as played by episode host Adam Driver).

“It’s wonderful to be here — because I’m not welcome anywhere else,” Lovitz’s Dershowitz said. “There’s a lot of haters out there for no good reason, but I like I said to my client and my dear friend Jeffrey Epstein, haters gonna hate.”

He then went on to rehearse a speech he planned to give the Senate, comparing Donald Trump to “another client of mine, Sir O.J. Simpson.”

Cecily Strong, as Senator Susan Collins, asked him not to mention his previous clients in connection with the president because “it’s not a great look.”

“If I learned one thing from my time with accused wife-murderer Claus von Bulow,” he said, “it’s that appearances can be deceiving. Trump couldn’t possibly be guilty.”

But before he could say why, his heart gave out and the sketch followed him down to hell, where Kate McKinnon as the devil said she would be sending him back up to Earth in a minute, but first she wanted to meet him because she’s “a huge fan.

“No seriously, you’re the G.O.A.T. And I should know, that’s what my legs are made of,” she said, adding that she was going to fangirl out on him.

McKinnon’s devil sat down with Lovitz’s Dershowitz for an episode of her podcast. (“I invented them,” she said, which is ironic considering McKinnon previously told Variety how much she actually loves podcasts.) Her first question was how he came up with the Trump defense, considering years ago he said one doesn’t need a crime to impeach the president, but now that he is working for him, he says one needs something “crime-like.”

Lovitz’s Dershowitz didn’t answer that question, in part because McKinnon’s devil followed it up so quickly by asking if there was anyone he wouldn’t represent.

“If someone is famous enough to get me on TV, it’s all good,” he replied.

“I used to let nobodies into hello, but now it’s all influencers,” she followed.

When Driver’s Epstein stopped by, he told Lovitz’s Dershowitz that he loves what he’s been doing for Trump. “All we get down here is Fox News, and it’s been a joy to see you work,” he said.

After McKinnon’s devil noted she appears differently to different people, Driver’s Epstein said to him she looks like “a woman my own age.”

Later in the episode, Colin Jost summarized the week-in-impeachment news during “Weekend Update.” Meanwhile, Michael Che said he didn’t watch any of the impeachment proceedings — but he did still make jokes about the events. Watch “Weekend Update” below.