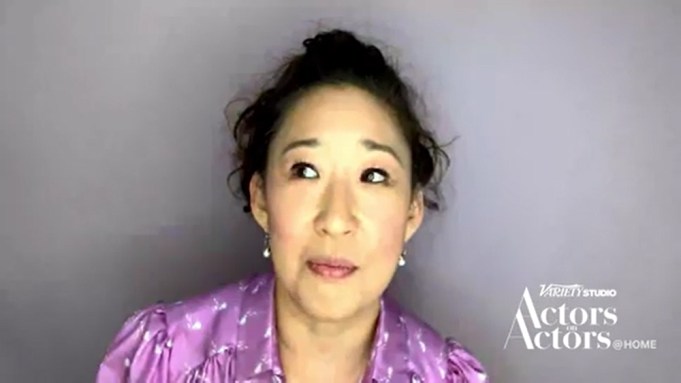 During her 10 seasons on “Grey’s Anatomy,” Sandra Oh was so deeply invested in playing Dr. Cristina Yang, she’d often get into heated debates with the writers about her character.

In an interview with Variety‘s Actors on Actors issue, Oh spoke to Kerry Washington — who starred in “Scandal” — about what it was like going “to-to-toe” with Shonda Rhimes, who created both shows.

“I spent a lot of time with writers, and television is all about your relationship with the writer,” Oh said. “What I was able to get from ‘Grey’s’ is to have the responsibility and the relationship with the writer to be able to direct where she’s going. If something kind of came up which was like, ‘That is completely wrong,’ I would go toe-to-toe with Shonda and a lot of the writers, which has been challenging. But I think ultimately, for the entire product and our relationship, if you’re fighting for the show, if you’re fighting for your character, people can tell that.”

Oh recalled a story line in Season 3 of “Grey’s Anatomy” when Cristina was going to marry Preston Burke (Isaiah Washington).

“Most of the shows that I have done have not been Asian-specific purposefully,” Oh said. “When we did ‘Grey’s,’ for at least the first 10 seasons we would not talk about race. We would not go into race, and that was purposeful. And, whatever, it was the right thing to do when it was. In Season 3, Burke and Cristina were getting married and there were the two mothers, the Asian mother and the Black mother, and I’m like, ‘Come on, there is a lot of story that we can do here!’ But they didn’t want to touch it, for whatever reason. Now my interest is much more in bringing that story in.”

Kerry Washington said that when she read the scripts for “Scandal,” she’s always start with positive feedback before suggesting any notes.

“It’s the truth,” Washington said. “You’re a truth-teller, which is a beautiful thing.”

“I feel like, when I look back, because it’s been six years now since I left ‘Grey’s,’ I feel like one of my biggest successes, for me, was I don’t feel I gave up,” Oh said. “We did 22 episodes, but in the early years, it was 24. It was crazy. Then you have to kind of pick your moments of where you can lay off the gas pedal, because it is such a slog. There would be scenes that I would just go, I don’t know, 10 rounds on, and I know I was difficult. And I really respect all the writers there who rode it out with me.”

“What does that mean, you would go 10 rounds?” Washington asked.

“I would go 10 rounds in saying, ‘It’s not right,'” Oh said. “You’ve got to do different levels with the writer, and then you bump it up and you eventually get to [Shonda]. You’ve got to bother her. When it felt like such an impasse, we would both be digging in our heels hugely. But just the friction itself, a lot of times a third thing would come out, and it would not be in my sight of consciousness at all; it would take that pushing against someone equally as strong. I started to learn how to trust that.”

For more from Variety‘s conversation with Oh and Washington, read our full story here.