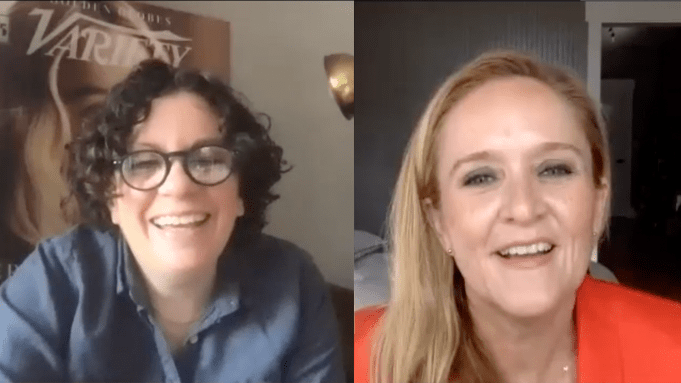 Since late March, Samantha Bee has been filming TBS’ “Full Frontal With Samantha Bee” — her topical comedy show — from the woods outside of her house in upstate New York. Her last taping of the show in its Manhattan studio was on March 11, the week that productions shut down because of the coronavirus pandemic. Bee and her family left town the next day. Soon, Bee and her husband, Jason Jones, began experimenting with his iPhone to see whether it would be possible to film the show from there — and it was. “Full Frontal” has been on since March 25, featuring Bee’s authoritative monologues, interviews and even remotely produced field pieces.

Recently, Bee appeared in the Variety Streaming Room, during which viewers got to see the first episode of the “Full Frontal” digital series, “Pandemic Video Diaries.” During the interview, Bee talked about how she and her team are creating the show each week, finding humor in today’s relentless and tragic news cycle, the upcoming election, her quest to save the U.S. Postal Service and accidentally swallowing a bug.

Is your husband, Jason, still the director and camera operator?

That is still the case. We have a little bit more equipment now, but not a lot. We’re still shooting the whole show on an iPhone.

And we’re shooting in the forest, but I would say it’s an eighth of a mile from the house. So there’s no plugs, you can’t plug anything in. And it’s actually very wild back there now. And I don’t want to say hostile, but it’s more hostile than it has been in the past. There’s a lot of poison ivy and he has it all through his body, now. He has systemic poison ivy from being back there too much.

So there was no poison ivy when you first started, and now there’s rampant poison ivy.

When we started in March, it was just cold. Spring has kind of unfurled as we’ve been shooting the show, which has brought various — like, we’ve had gnats swarms, and there was one day where we were shooting and all of the dragonflies hatched on the same day. I don’t think you could see it in the show, but we were just swatting away clouds of dragonflies to get back there. Right now it’s really all about the poison ivy, which is bad. Jason gets it really badly.

We shot an episode yesterday and he just totally flared up again. Nature is disgusting.

How does the virtual writing process work?

There are some processes that work better than others done remotely; I think that writing is one of those processes. Everybody’s familiar with kind of going away and working on their own a little bit — more than other departments at the show. It is very isolating. It’s much more fun to be in a room together doing a rewrite altogether, physically in person. There’s really no nuance to a big Zoom meeting or a big Google hangout. A lot is lost. Everybody’s kind of muted, and it’s very awkward and jokes don’t land in the same way. It’s not the same kind of rollicking environment that we would all hope for, but this is what we have.

Everybody’s still working remotely, but also handling massive anxieties about the world right now and coronavirus. And it’s a lot. People are very confined. We’re less confined, but we have poison ivy.

The monologues are so rapid-fire, what are the actual logistics of shooting those in the woods?

I have a teleprompter, which is really just my kid’s iPad, because there’s no world in which I’m going to memorize everything. I’ve fashioned my daughter’s iPad and I make sure that she charges it fully on the Monday night so that I can have it all day on Tuesday. I’m loading it into the prompter while Jason sets up. It sort of makes sense and you really can’t tell how low-rent it is when it’s on TV, but in real life it’s just us. I’m just in the kitchen loading the prompter, getting the timing exactly right, making changes for myself. Just formatting it in a way that I can see it properly.

Normally, a super-talented person runs the prompter, and you’re really in sync with them and they’re speeding up the words as you go. As you speed up, they speed up. But running it yourself as a totally different vibe. When I do the show in the studio with a studio audience, I try not to stop. I try to just do it all just straight to the camera with no interruptions, 10 or 11 minutes. I just go for it.

In the woods, it’s trickier. I have to stop down because the speed will be incorrect or a fly, yesterday, literally a bug flew into my mouth. It was bad. It was such a weird moment for me because I have a real Catholic girls’ school gold star mentality. I’m like, “I’m going to do it. I’m going to do it straight through, no interruptions. It’s going to be perfect.” So, a bug flew into my mouth and in the moment I just ate it. I just swallowed it. It was so instant because I was like, “The show has to go. It’s go time,” so I just swallowed the bug.

For sure, and I try not to because I don’t really want to center the conversation or center the material around my emotional response to it. But there definitely are times where I will have to start again just to get it right, to do justice to the material.

I try to talk to the studio audience. They’re really a part of a process for me and having a communal experience with them, that we’re sharing something is very important to me. I don’t see the studio audience as other for myself. I feel like we’re really in it together. Sometimes I get emotional because I’m sharing something with them or we’re sharing an experience. And I think I’m getting a little emotional in the backyard because there’s nothing more stark than doing the show in the backyard because the whole world is shut down and people are dying. I’ve never really wrestled so much philosophically with the idea of is now the time to do a comedy show. I’ve never really thought that it wasn’t possible to make a show in a moment. But this time I did take a pause and think, “Is now a time for this show? Should we be doing a show right now?” Ultimately, it’s all that we know how to do, and this is how we express our own frustrations or our own feelings in this moment. So I overrode that.

But for the first time really ever in the history of the show, I thought, “Maybe we shouldn’t.” Anyway, we did. I’m glad that we are.

Looking ahead, what do you think your strategy and approach will be to the election?

Well, we’re trying to figure out how to cover it. I’ve covered a whole lot of election cycles, a lot. I’ve been to every convention since 2004. This is so bizarre to me that we barely have space to talk about an election. There’s so much happening that is so — we should be talking about voter suppression every single day, every minute of the day, because so much is happening in that realm, but there’s too much other stuff going on. So we’re still trying to figure out what our approach is. We’re not sure what the conventions will look like. Obviously I think the DNC is a virtual convention, but what does that mean? How do we cover that?

And the RNC is — we’re not sending people to it. It’s like, “How do we even approach this? How do we think of this?” We don’t really have any answers, I just know that we’re not going to them because we would not do that.

Do you think you’ll return to the studio only when you can have an audience there?

No. I’m not so concerned about that. Listen, I love our audience, I really do. I think it’s better to just err on the side of caution for as long as possible. I’d really much rather have our audience feel safe and me feel safe and our crew keep everybody healthy and not have an audience.

So I think there’s a world in which we go back into the studio, but not for a while, probably not for a great while. But I don’t see an audience in the foreseeable future.

I know one of your initiatives is to try to help save the post office. And you’re launching a campaign called #MailedIt. Tell us about that.

We did a whole segment about just how vital the USPS is to this country. I mean, it’s so essential and they’re in so much trouble. The United States Postal Service does incredible work getting mail to every single person in this country regardless of where you live. And the president is really undermining them, really doesn’t care if they live or die, is cutting them off at their knees. The administration is just doing them a great disservice.

July 1 is United Postal Workers Day, so we’re celebrating that day by doing this #MailedIt campaign. So if you tweet and use the hashtag #MailedIt, TBS will buy a stamp from the USPS, which I think is great. So everybody should tweet it a billion times. We can save the whole post office in two hours, no problem.

This interview has been edited and condensed. To see the full interview, which includes questions submitted by Variety readers, as well as “Pandemic Video Diaries,” watch the video.