Samantha Bee on the 2020 Election: ‘Dare I Allow Myself to Feel Hope?’ (Watch) 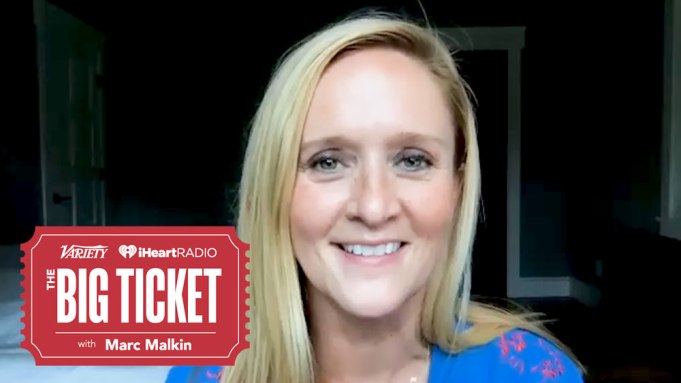 Samantha Bee is on a Zoom call from her home on the East Coast, where she’s been shooting her hit TBS political talk show “Full Frontal With Samantha Bee.”

“This room is awful,” she says, looking back at a dimly lit room with not much furniture in sight. “It’s my guest room. My dad sleeps here.”

Her father, however, has returned to Toronto, where Bee grew up. “He went across the Canadian border just before the full lockdown when they closed the border, so I haven’t seen him since February and he’s going crazy and I am also going crazy because the entire family is there and we have no way to connect. He’s very upset. He can’t tell me about his doctor’s appointments in person. He has to do it via text and all of his blood work results.”

Medical chit-chat aside, they’d have some celebrating to do, too. “Full Frontal” is up for four Emmys this year. Bee also recently launched a weekly podcast, “Full Release,” in July.

“I did say this to my staff when we got the nominations, ‘You know, it’s very clear that the world has really changed and we’re all working in the weirdest of possible circumstances. We don’t get together and make a show so that we can get prizes. That’s not why we do what we do, but it is nice from time to time to get a little outside validation and just to have a nice day to just bask in that a little bit,’” Bee says during an appearance on Thursday’s episode of the Variety and iHeart podcast “The Big Ticket.” “You have to find a little joy in all of this. You do have to celebrate yourself a little bit. It doesn’t mean you have to get a skywriter.”

I hear a lot of people talking about how they’re watching the Democratic National Convention a lot more than they have ever watched in the past.

I’m watching it. I’m focusing on it. You know, when you’re actually there, there’s so much happening. And it was very condensed, which is actually really helpful because a lot of that stuff just takes forever and on a normal year would go all day. Like you wouldn’t end up seeing something because you’re like in line for the bathroom and trying to get an interview over here. It’s just like a lot of people milling about, and then everybody is going to get a wet turkey sandwich at the kiosk or lining up for the CNN Grill or some bulls— like that. So this is actually a more focused kind of attention, which I think is actually good. And they’ve done a pretty good job. I loved the roll call. The roll call was awesome. I was here for it.

Are we going to miss Bill Clinton playing with balloons?

We can always look back. We have video of that. We can enjoy that: “What are these magical orbs? They’re light and they bounce and they’re so colorful.”

So who has impressed you the most so far with their speeches? [Editor’s note: This interview took place before Kamala Harris’ history-making acceptance speech.]

Michelle Obama was great, but that was expected. You know, surprise me by being bad next time. She was amazing. Kamala is going to be great.

Dare I allow myself to feel hope? I mean, again, like a little bit like celebrating an Emmy nomination, you have to just give yourself a moment where you go, “Is it possible that we can be okay? Could we do this?” And you go, “Yeah, it’s possible. They can pull this.” Now I hope it’s not a squeaker. Like I hope it’s real, you know? Basically the tone we’re taking on the show is expect the worst because when you expect the worst you plan for every outcome, which we did not have a plan last time. You gotta have a plan. You gotta have something to hold onto. So I’m kind of planning for the worst and hoping for the best. It’s like an old wives tales, very grandmother wisdom.

Now, let’s say we’re in a normal time without the pandemic and you go into an office building and step into the elevator and Donald Trump is in there and the doors close — what would you say to him?

Oh God, what do I say? I would honestly just say, “I think you are doing a terrible job. I don’t understand where you’re coming from. Can’t you just step down? Why don’t you just stop? Why are you even trying to be the president? We can all see how much you hate it?” I’d be a reasonable person. I think I would be normal. There’s no other way that I could be. I don’t have a monologue prepared for that moment. I think I would just start talking and he would hate it. He would not be listening. He would definitely be on his phone and he wouldn’t know who I am.

If you were running for office, what would your campaign slogan be?

It really would just be like, “Oh, for f—‘s sake, would you just vote for me? I don’t know what I’m doing.” I would never run for office. That is not an aspiration of mine whatsoever.

Do you have requests in already for Joe Biden to be on the show if he wins?

I’ve had running requests. I have requests into all of them, actually not Donald Trump, I don’t have a request into him. Never. I think I have requested for all of them. They just sort of say no, or put you off or whatever, they go on the other shows. It’s really not accurate because I think I do really fair and interesting interviews with political people. I think I’m very good at it. And I like talking to them. So I think I would actually do a great job, but I think they think, or they have some impression that it would be just attack mode. I did have Kamala on twice and she was great to talk to. It’s not all talking points? It’s not like, “here are the beats that I want to hit in this interview,” but she’s like a real fully realized human being with a life outside of this moment.

You wouldn’t want Donald Trump on the show even if the opportunity presented itself?

He’s an impenetrable narcissist. I don’t know what would be gained. I know that my soul would exit my body. I really would consider that slumming. Like I don’t love to give voice to conspiracy theorists and things like that. I wouldn’t be elevating his voice, but would I be giving credence to his views. I think it’s useless. He doesn’t know what he’s talking about or he’s lying. So what truly is the point?

Who is your dream guest?

I’ve always wanted to have the Foo Fighters.

Give me your pitch to the Foo Fighters. Let’s make this happen.

I love them and I love Dave Grohl and I do enjoy having music on the show. I truly do. It would kind of bracket my news satire career very beautifully because when I first came to New York and I was auditioning in person for “The Daily Show,” I went to see the show the night before the audition. They had a playlist and there was a Foo Fighters song on and I got so emotional listening to it and it just represented something so huge, like the hugest opportunity. And so anytime I hear it, it takes me right back to that. I just go right back to that moment of like, this is where it really began.

What was the first audition you ever went on?

It was very bad. Oh God. The first real audition was for a Shirley MacLaine movie called “Mrs. Winterbourne.” I read for the part of like a housekeeper. There was no character name. That represented a very high point because after that audition, I then auditioned for 1,000 things that never got made. After I left theater school — I think I did a very good job and was impressive in theater school — I was like, “I’m going to be auditioning all the time for so many things.” So it was just a very natural extension, but then I absolutely hit rock bottom. For 10 years, no one would hire me.

Do you want to do anymore acting?

No, not at all. Unless when my husband — he’s a TV creator and director and he’s working on multiple projects — cooks something up, I’ll be in that. But it’s not an aspiration of mine at all.

After Shirley MacLaine and the housekeeper, that was it.

I mean, definitely did not get that part.

Maybe you did, and you’re not telling me?

[Laughs]. I was talking about this with the show writers the other day that I did play a Cinnabon girl in “The Love Guru.” But I got cut out of that. Cut out of “The Love Guru.” They were like, “This isn’t good enough for this great project.”

Do you remember your lines?

You can listen to the full interview with Bee above. You can also find “The Big Ticket” at iHeartRadio or wherever you listen to your favorite podcasts.